According to plan: Multiyear state Capitol effort wins excellence award
Architect Avi Lothan of Lothan Van Hook DeStefano Architecture in Chicago has been the principal in charge of the Illinois State Capitol Complex Master Plan, a comprehensive effort begun in 2007-2008 to provide a vision of sustainable design objectives that guide future growth and expansion for the Illinois State Capitol. Rebuild Illinois, signed into law in June 2019, made funding available to complete the ambitious master planning process and commence work on projects at the Capitol complex, including enhanced visitor accessibility and creation of an oval plaza staging area, according to Lothan.

In fact, Lothan’s plan has been selected for the American Institute of Architects Illinois’ Excellence in Master Planning Award for its commitment to sustainable, vibrant and forward-thinking civic leadership. The Master Plan provides a guiding framework for investment and evolution of the Capitol for decades to come, according to Andrea Aggertt, Architect of the Capitol.

Thanks to the Rebuild Illinois budget appropriation, the master planning process has involved compiling and updating nearly 14 years of detailed facility needs assessments, concept designs, LEED sustainability analyses and reports for each building determining the need for renovation or replacement.
Future demolition of the William G. Stratton Building, which is central to the plan, would provide a significant amount of green space adjacent to the Illinois State Capitol Building. In Lothan’s view, after the Stratton Building is demolished, a new HVAC utility plant could be installed as part of the overall sustainable infrastructure plan consistent with the objective of creating a carbon-neutral environment.

The planning effort required conscious consideration of historically significant buildings in the 122-acre campus. Following a facilities needs assessment, the plan established a vision of overall design objectives, identifying major projects for future phases of campus improvement. According to Lothan, standards based on socially and environmentally sustainable design principles, as well as financial and energy efficiency analyses, should be a consideration for all renovation and new construction within the complex. Ideally, any new buildings to be constructed will include space for retail and other amenities within the Capitol campus which would create a more attractive urban environment.

Stacy Pfingsten, executive vice president of AIA Illinois, acknowledges the masterful work of Lothan and others on this ambitious attempt to examine a wider Capitol complex study area and expertly integrate planning for the functions of state government along with symbiotic relationships to the city and regional urban development adjacent to it. According to AIA professional jurors who reviewed the Master Plan award nomination, the comprehensive Illinois State Capitol Complex Master Plan illustrates excellence in providing an enduring vision of sustainable design objectives to guide future growth and expansion of the entire Illinois State Capitol Complex.

According to Aggertt, the Illinois Capital Development Board, in concert with the Capitol Historic Preservation Board appointees, elected officials and their designees, periodically review planning for all projects in the realm of environmental sustainability, energy efficiency, community context, infrastructure, utility and parking needs. One such project is the State Capitol North Wing Renovation that began in July 2022. Under the direction of Philip Hamp of Vinci Hamp Architects of Chicago and Henneman Engineering of Champaign, the project is a continuation of an earlier west wing renovation that halted when funding dried up in 2013.

The north wing renovation is underway and will address the creation of a more accessible entrance to the Capitol. According to Aggertt, this will also serve as an orientation space where tour guides can show videos of construction history spanning back more than 100 years. Scheduled to be completed by the end of 2024, the north wing project made it necessary for the state Senate to vacate their chamber and relocate to the ornate Howlett Building Auditorium, which underwent extensive remodeling to replicate the Senate chamber configuration.

To the west of the Capitol and in front of the Stratton Building is a gaping hole in the ground that is the site for an underground parking deck. This will replace the 110 parking spots lost due to improvements to the Capitol entryway and plaza.

From Lothan’s perspective, there is potential to amplify tourism for Springfield that could include transforming the Illinois State Armory building into a visitor center providing wayfinding from the Abraham Lincoln Presidential Library and Museum to the Illinois Governor’s Mansion, and creating an outdoor museum of statuary and monuments winding through the Illinois State Capitol Complex. 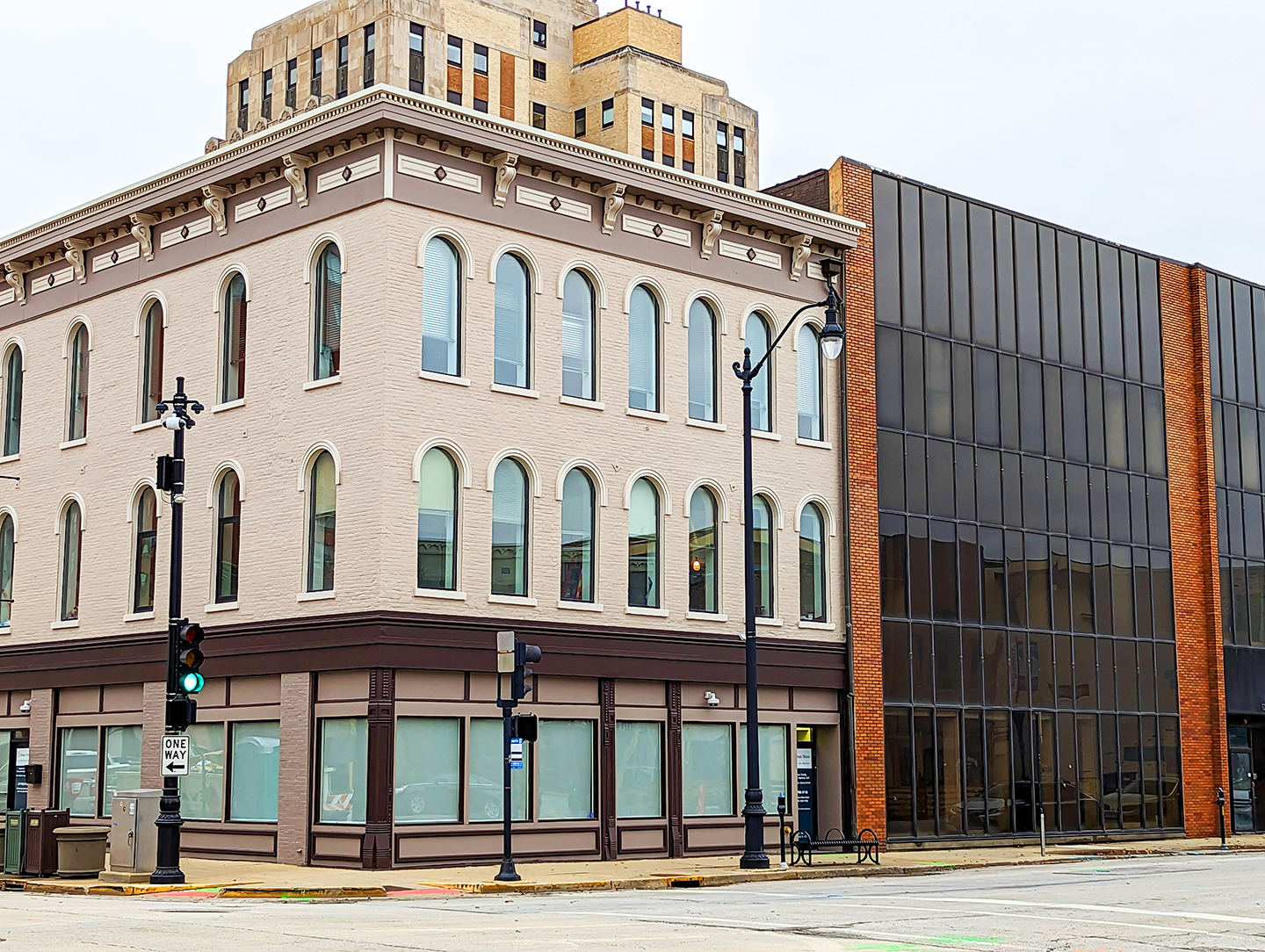 Left: Horace Mann is investing in downtown Springfield with the purchase and renovation of the historic Witmer-Schuck building at the southwest corner of Washington and Seventh streets. PHOTOS COURTESY HORACE MANN

Horace Mann adaptive reuse carries on a legacy in downtown
The corner of east Washington and Seventh streets will become the new home for Horace Mann personnel and executives in residence. The company purchased the building at 628 E. Washington St., which has a rich history in the commercial legacy of downtown. Renovation of the upper two floors is nearly complete and will be used for flexible corporate use.

According to Tim Smith, president at Evan Lloyd Associates, efforts were made to respect the historic character of the building, which has been a significant landmark for more than a century. With the exception of the first-floor entry and some trim elements that were altered over the decades, the exterior is strikingly the same as it appears in early turn-of-the-century photos.

According to a Souvenir Supplement of Springfield’s Illinois State Journal, a building was erected on the southwest corner of Seventh and Washington streets by Daniel Witmer in 1867. A successful manufacturer of doors and window sash, Witmer had various tenants and a third-floor meeting room that was used by fraternal, cultural and civic groups.

By 1880, the Springfield Board of Trade occupied the current site of 628 E. Washington St. where they promoted industrial growth and the establishment of the Springfield Watch Company, the Alexander Corn Products factory and the Springfield Woolen Mills. The Board served a variety of functions to support local businesses: it had a telegraph to receive up-to-date market information; it displayed samples of commodities and goods for sale and acted as an arbitrator for conflicts between businesses.

From 1889 until Springfield’s City Hall was built in 1894, the building also housed government offices.

An 1892 Souvenir Supplement to Springfield’s Illinois State Journal noted that G. Edward Baumann and his brother established a compounding pharmacy at the site and they advertised that they were “ready to dispense the purest drugs to the sick and suffering at any hour of the day and night.”

Other than the pane glass display windows on the first-floor, the three-story building in the newspaper article looks almost exactly as it appears today, 130 years later.

In the spirit of preserving the historic streetscape view, architect Smith worked with Horace Mann staff to select a compatible paint scheme and make minor repairs to the remarkably sturdy edifice. Though much of the interior had been altered over time, Smith was able to remove non-historic materials to recapture some of the original ceiling height. In addition, partitions and a second entry were added to the first floor, which now houses Hageman Family Insurance, a local Horace Mann agency.

The company has also purchased the building directly to the west of 628 E. Washington St. to create a small number of surface parking spots and green space that may also involve demolition of a second building beside it, according to Don Carley, who oversees Horace Mann facilities.

Smith noted that the development team, which includes Evans Construction as the general contractor, plus Hanson Professional Services, B&B Electric, Henson-Robinson Company, E.L. Pruitt and STREB Fire Protection Services, is being guided by the City’s Historic Sites Commission and building departments to ensure aesthetic compatibility within the site.

In words the Illinois State Journal used to describe Baumann’s Pharmacy in 1892, all are counting on Horace Mann as a company that will continue to be “earnest and determined in business and have a purpose which is worthy of their honest efforts and worthy of the enterprising spirit of their fellow citizens and patrons in Springfield.”