Legacy Pointe Eatery, 1130 W. Legacy Pointe Drive is the newest restaurant at Legacy Pointe in the space formerly occupied by Fox Run. It holds itself out as a “moderate – to medium-priced, casual-dining establishment” with a “high-quality full menu” that’s “centered around fresh and homemade items with a focus toward healthier options.”

Legacy’s operations are run by Dustin Coons, who started at Charlie Parker’s Diner as a dishwasher in 2004, and who has had stints at Panther Creek Country Club, Finley’s Tap House and, most recently, at Sangamo Brewing. With that track record, it’s not surprising that Legacy has managed to live up to its own billings.

The physical space hasn’t changed much from when it was occupied by Fox Run. With the corrugated metal half-walls and the polished concrete floor, acoustics can be difficult. All in all, the message is that Legacy is more restaurant than bar. And speaking of the bar, there’s a neat half-wall that separates the bar area from the main seating section. There’s plenty of seating in both areas, including the option to select a somewhat secluded table should additional privacy be desired. Spacing between tables was also generous, so much so that we think management wisely decided to stick with a manageable customer head count.

We visited Legacy for dinner and were pleased that we had made reservations in advance, as several walk-in parties were advised they’d have to wait approximately 30 minutes. Our party was quickly seated, and a server appeared right away to take our drink orders. The specialty drinks were fun, and there was a good variety of offerings on the standard drink menu.

Speaking of menus, Legacy’s can be described as kicked-up pub fare. Starters include things like crunchy Korean shrimp ($11.59) and sautéed Brussels sprouts ($10.59). Entrees include flatbread pizzas (made with a gluten-free recipe) and a variety of salads and soups. Sandwiches, or handhelds in Legacy speak, include the spicy goat burger (No, not that goat, but rather goat cheese, jalapeño bacon and a drizzle of honey – $12.59), and the short rib sandwich (Korean-style braised short ribs with kimchi slaw, sautéed bell peppers, onions and mozzarella cheese – $14.59). All handhelds come with house-made chips. There are also more traditional restaurant options available which include several pastas, a steak and a handful of seafood dishes that run from $13.99 (veggie power bowl) to $21.99 (New York strip).

For starters, our party of four went with the spartichoke dip ($10.99) – a combination of spinach and artichoke – and the onion rings ($9.59). The dip came with deep-fried, gluten-free pita chips that were the perfect accompaniment for the gooey, garlicky spinach and artichoke. It was good stuff, as were the onion rings that came served with their own Legacy sauce, although I prefer plain old ranch. 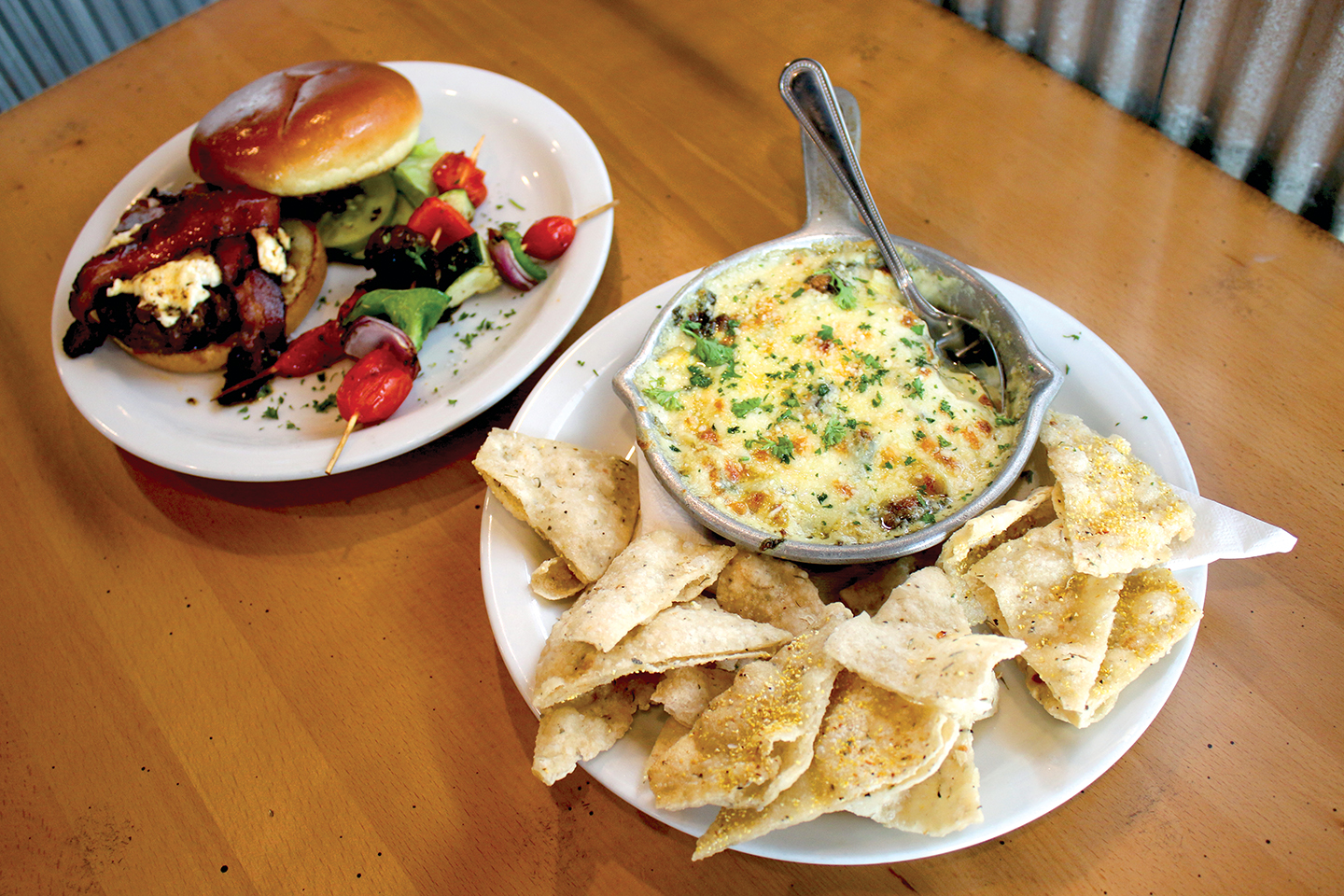 As my entrée, I went for the horseshoe, which was an unusual selection for me, as I generally don’t like them. But the Philly shoe caught my eye – especially the braised short ribs and Korean barbecue sauce ($15.99). It also came with a generous helping of peppers, onions and mushrooms. This was, as one might expect, a rich dish. The braised-short ribs were, in the main, unctuous, but there was also some equivalent of burnt ends that added a nice texture component.
The Korean barbecue sauce had just enough sweetness, but didn’t overpower the dish. It was the kind of dish that you want to tuck into on a cold winter night.

Two of my guests got burgers – one the traditional burger ($8.59) and the other the spicy goat burger ($12.59). Although Legacy won’t cook any of their burgers beyond medium, they were both reported as being nice and juicy. We all thought that six ounces was on the small side these days for burgers, but the meaty burger taste was definitely present. I managed to sneak a bite of the jalapeño bacon with a dash of the honey and thought that it was an interesting and tasty way to elevate a burger. The house chips were appropriately cooked, but slightly under-seasoned. A dash of salt made all the difference.

My last guest went with the white wine bucatini pasta ($15.99). It came with jalapeño bacon, garlic, asparagus, cherry tomatoes, spinach, sunflower seeds and a balsamic reduction. She had tried the dish before, and there was no question that she was going to order it again – which is testament to the strength of the dish. It also was quite appealing to the eye.

Service was good, and we appreciated that staff backed each other up. The manager also came by several times to make sure everything was going smoothly, which was a nice touch.

If Legacy Pointe can keep up the good work, it should have a long life in the capital city.