I’ve been seeing lots of chatter on social media about Dolphin Chicken, Fish and Grill, and hearing some of my friends make favorable comments about it. So, I figured it was time to give Dolphin a shot.

First thing to know is that Dolphin is drive-thru and take-out only. Second thing is that they have no website or Facebook page that I could locate. I’m glad I asked around and discovered there was no inside dining, as I would have had to face the ignominy of another logistically flawed lunch review.

Dolphin is located near the intersection of Fourth Street and North Grand, in what used to be a Domino’s Pizza. The drive-thru seemed to be more popular than carry-out the day I visited.

Even without a website or social media presence, it didn’t take much work to find Dolphin’s menu online. And, true to its name, most of Dolphin’s offerings were seafood, chicken and traditional grill items. However, there were some curveballs – like the gyro sandwich ($7.99), Philly sandwiches ($7.99 – $10.99) and loaded baked potatoes (choice of chicken, beef, gyro, shrimp or bacon, $10.99 – $14.99).

One of my favorite items was the combo plate, which consisted of a choice of two of the following: three wings, six regular shrimp, chicken gizzards, one jack, catfish nuggets, one catfish fillet, tilapia, three jumbo shrimp, two chicken tenders and chicken livers served with a choice of fries or slaw for $10.99. I was also intrigued by the lunch specials: a choice of two burgers or sandwiches (that’s right, not just one, but two), plus fries or slaw for $15.99. There are also options for family-style bulk ordering all the way up to 100 pieces of Chicago-style chicken for $119.99. Suffice it to say, nobody is going to go hungry eating here. 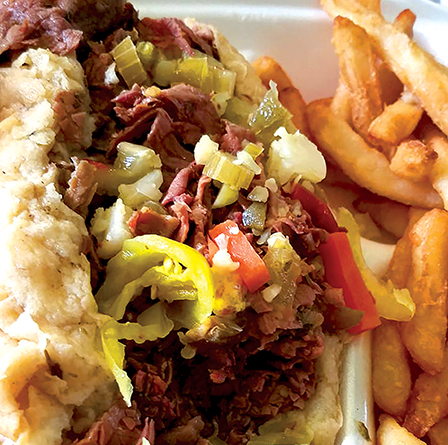 Since we were ordering take-out, I decided to get lunch for some of our office assistants. Our first order was the bacon cheeseburger ($6.99), plus fries ($2.49). She reported that the burger had a foil wrap to maintain its warmth in transport and that the fries were thick-cut steak fries that may have been a little undercooked, a verdict I shared. The burger looked like it would have been enough itself, as it was a rather large patty and bun, loaded with tomatoes, grilled onions, thick-cut bacon strips and cheese to top it off. She finished her report by advising that the flavors of the bacon, onions, burger and cheese paired well together with the salty (though not too salty) steak fries.

Our second order was for 10 regular shrimp that came with fries ($9.99). Her tasting notes were:
• There were lots of fries, and they held up pretty well for take-out;
• Although they were regular and not jumbo shrimp, they were still well-sized;
• The shrimp had a nice thin, even coat of breading/batter, not too much, and it was still crispy. You could taste the shrimp. The breading had some nice seasoning to it so it was not bland, and the shrimp were well-cooked, not overdone or chewy.

She did not come close to finishing the whole dish.

Our third order was for a grilled chicken sandwich (5.99). Reports from the field were that it was generously sized, came with fresh tomatoes, lettuce and onion and was nice and juicy.

Our last order was mine, and it was for the two-piece perch dinner with fries ($8.99). I grew up on real lake walleye (not the stuff generally served around here as walleye) and lake perch.

But it was always the perch that I loved – mild tasting, but a bit sweet, with a firm but flaky texture that rarely, if ever, leaves a fishy aftertaste. Dolphin’s version brought me back to my childhood. The fillets looked and tasted like they had been breaded in a combination of flour and crushed crackers that was nicely seasoned, but not so much that it overpowered the fish. I appreciated that the fish had not been overcooked and was not greasy at all. Whoever Dolphin had working the fryer that day deserves a raise. Except the fries were limp and underdone – my fault for not ordering them crispy.

Dolphin might not be something you want to eat every day. But when you do have the urge for some fried chicken, fish or shrimp, make sure to give Dolphin a try.