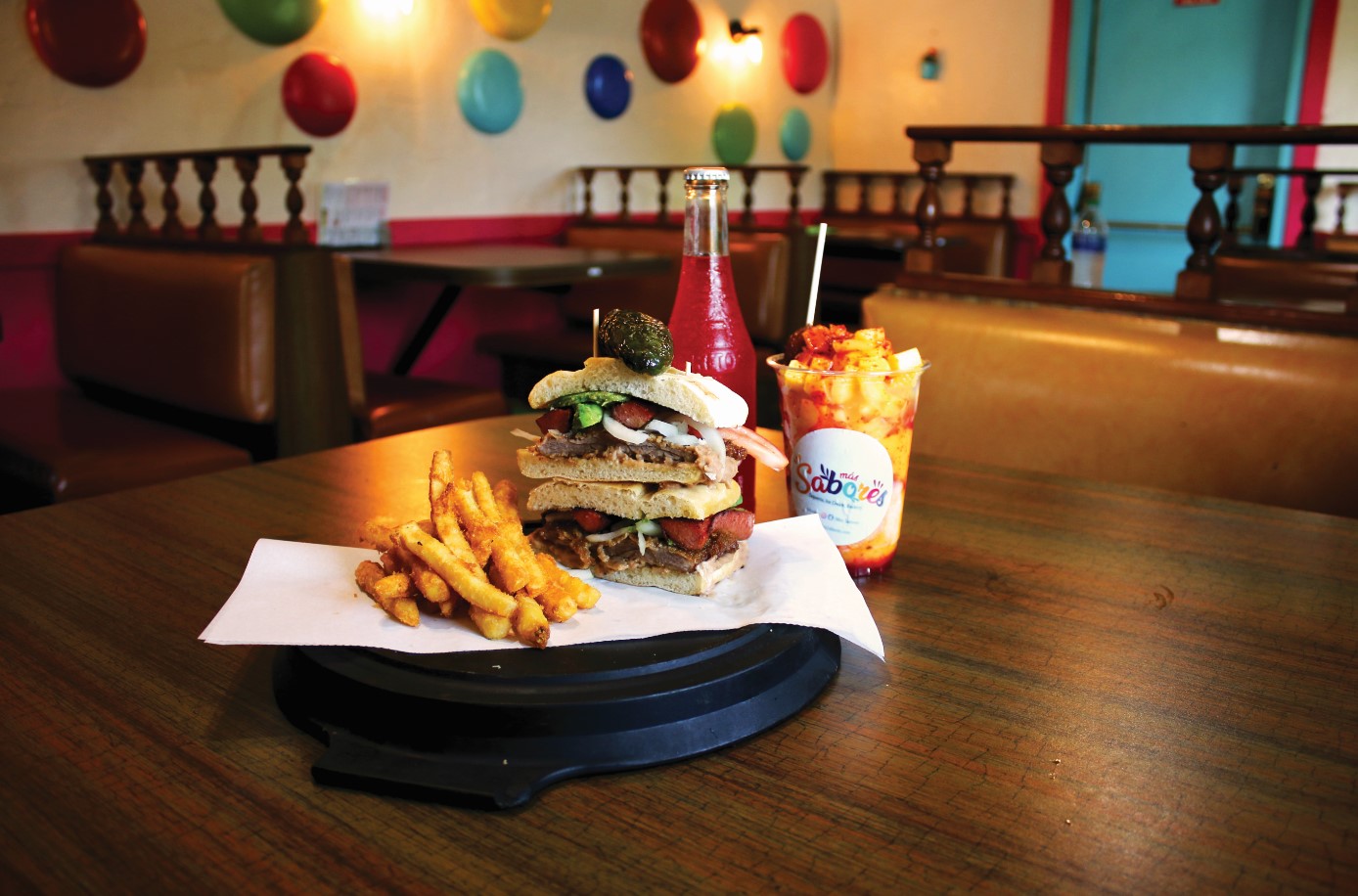 Until recently, I thought that Mas Sabores was only a bakery, ice cream and dessert shop. But a friend mentioned having lunch there a few weeks back, so I decided to check the place out.

Mas Sabores (which means more flavors), the sister restaurant to Sabores in Chatham, is located on North Grand Avenue in the former No Way Jose space, and is owned and operated by Alex and Gabby Rico. You can’t miss it – the building is painted in a panoply of bright colors.

My guest and I arrived on a beautiful summer day and were very pleasantly greeted by the ice cream staff who pointed us to the front of the space, which constitutes the sit-down restaurant part. There are a few dozen or so tables and booths. Décor is limited and the TVs were turned to a variety of Mexican stations. Menus quickly appeared, along with our drinks.  Although we stuck with water, there’s a whole assortment of specialty Mexican drinks, including Mexican Coke.

The crowd was a bit thin, but that’s to be expected on a Monday of State Fair week. Our fellow diners covered the whole spectrum of Springfield citizens.

Our server, who was quite pleasant and efficient (when asked, she said she had been with the owners for years — they are lucky to have her), checked in a few times but certainly did not rush us to order. We decided to start with the chori-queso ($7.99). This was a generously sized order of cheese dip with a healthy amount of chorizo sausage mixed in. Unlike Spanish chorizo, the Mexican variety is made with chiles, rather than paprika. It was certainly not a light dish, but it was fun to have something other than just chips and salsa.

Regarding salsa, thanks to a tip from a good friend, I now always ask if hot salsa is available. It was; in addition to its fresh tomato salsa, Mas Sabores also serves a hot green salsa and a hot red salsa. At our server’s suggestion, I went with the green salsa. I have a pretty high tolerance for heat, and even I was surprised at how fiery it was. Still, it had plenty of flavor to go along with the kick.  The red sauce was tomato-forward and, to my taste buds, could have used more cilantro (but then again, I don’t think there can ever be enough cilantro, so I’m a bad data point on the topic).

For entrees, we went with the chicken fajitas and the three-taco meal.

The fajitas ($12.99) were a dinner-sized portion and came with the usual side dish of rice, beans, lettuce and sour cream. My guest found them to be on par with Mas Sabores’ peers. I was somewhat surprised that, with all the increases in food prices, Mas Sabores was very generous with the chicken and didn’t try to squeeze in some extra onions and peppers to fill out the plate.

The tacos ($9.99) come with a choice of corn or flour tortillas and are served Mexican-style (diced onions, cilantro, lime, radish and cucumber) or American-style (lettuce, tomato and sour cream). Diners can make it a dinner by adding in rice and beans for an extra $2.99. I went all Mexican-style and had one carnitas, one al pastor and one steak, all with flour tortillas. I love a good corn tortilla, but I haven’t found the perfect one in Springfield yet. So I stuck with flour, which is a bit unusual for street tacos like this. I think I prefer it now.

I really enjoyed the tacos — the lime and pickled vegetables added just the right zing to balance the protein. The carnitas had the right ratio of tender pork pieces to crunchy pieces, while the al pastor had the requisite earthy and spicy notes from the achiote peppers, which complimented the cumin and Mexican oregano. The steak tacos, by comparison, were a bit bland, but still tasted good.  Other options included lengua (beef tongue) and tripa (cow intestines). I’m usually all about the nasty bits, but rarely on a first visit to a restaurant. Maybe next time.

On our way out, we lingered for a minute to check out the back of the space where the sweet stuff is dished out. Here guests order and pay at a separate counter. Again, the staff could not have been nicer or more helpful. We were sorely tempted, but ultimately passed. Again, maybe next time.