Many downtown redevelopment projects in the works

Many downtown redevelopment projects in the works

There is plenty of vacant, multistory space available in Springfield’s downtown and a program that utilizes tax increment financing (TIF) to reimburse owners for a portion of the cost to acquire property, stabilize buildings, redesign and renovate interiors and upgrade exteriors. But developers are experiencing a shortage of contractors available to undertake small and midsize construction projects. Despite that obstacle, several redevelopment projects are currently aimed at revitalizing the city’s historic downtown.

Some of the typical design problems they’ve encountered in converting downtown building stock are windows that have been bricked over and interiors chopped up in “interesting” ways, according to Lee and Nickell.

But by far, the greatest challenges are the schedule delays resulting from the ripple effects of labor shortfalls, a crippling impact of temporary pandemic shutdowns. “We posted the projects for open bids in November, and as of yet have had no replies from contractors who pay prevailing wage, which is required to meet city TIF grant program guidelines,” Nickell said.

Nickell also has façade grant projects underway at the former Bridge Jewelry building, 215 S. Fifth St., currently the home of Springfield Vintage and Beelzebunz Bakery. In addition, he is working to renovate 415 E. Adams St., which houses Elf Shelf Books & Music on the ground floor. With a total of 19,000 square feet, the building configuration ranges from three stories in the front to five stories in the rear. With such a varied structural configuration, the project is still in the redesign stage, with options that potentially include a combination of residential and specialized event space. 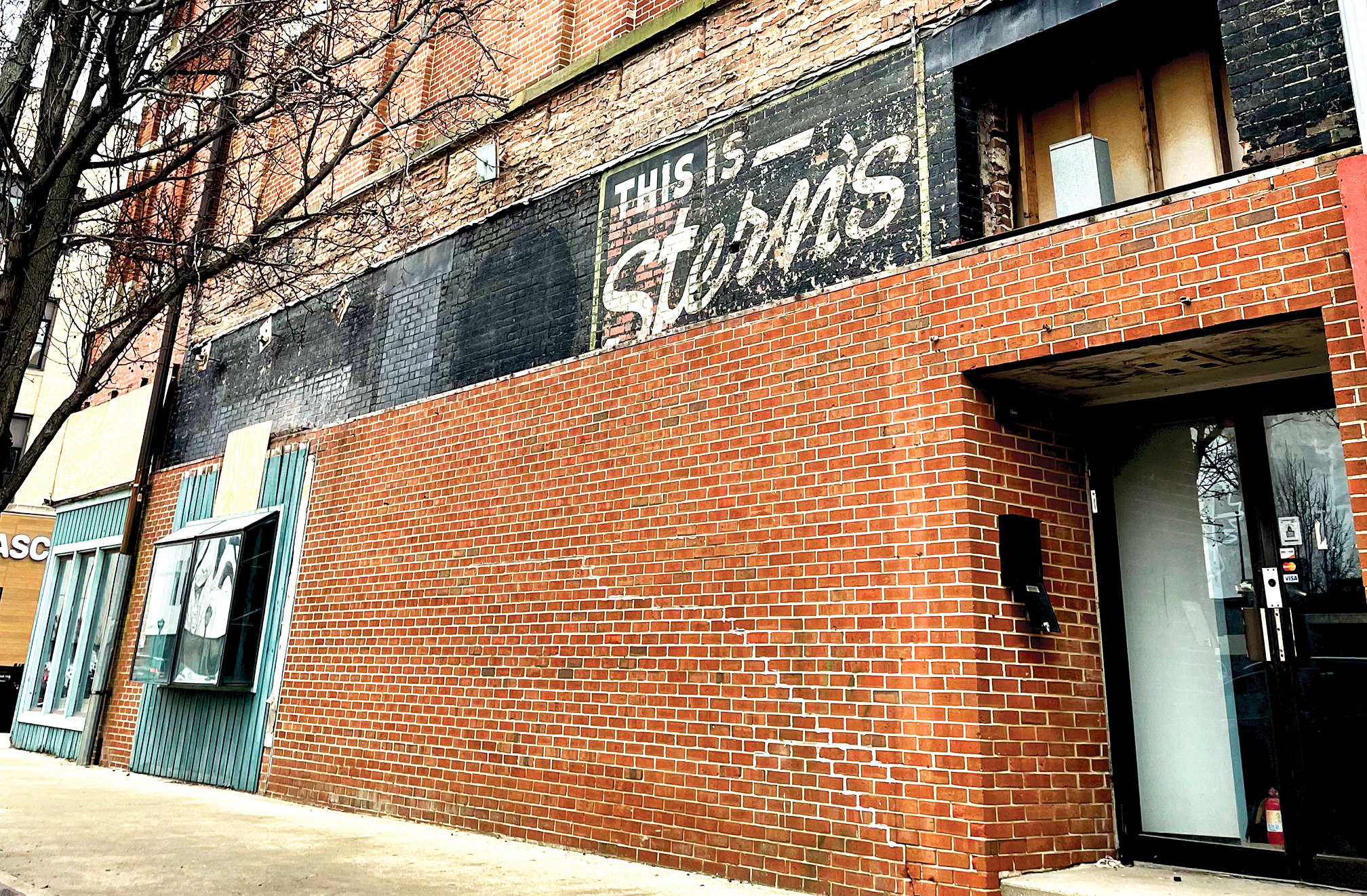 Exterior work on the building has revealed signage for Stern’s Furniture, once a staple of downtown. PHOTOs BY CATHERINE O’CONNOR

“We have a wide variety of tenants, including college students, nurses, doctors, lawyers and retired individuals. There is currently one loft apartment that faces the Old State Capitol that is vacant,” said Marriott.

Another tenant, Anthony Dandridge, is leasing the former Catch-22 space in the basement level of the building at 11 ½ W. Old State Capitol Plaza and plans to open a nightclub called The Truth Lounge.
According to Marriott, TIF funding may come into play to update the building facade, which is under control of the Springfield Historic Sites Commission. The commission must approve a plan before the project can begin, but Marriott hopes to start work this spring. 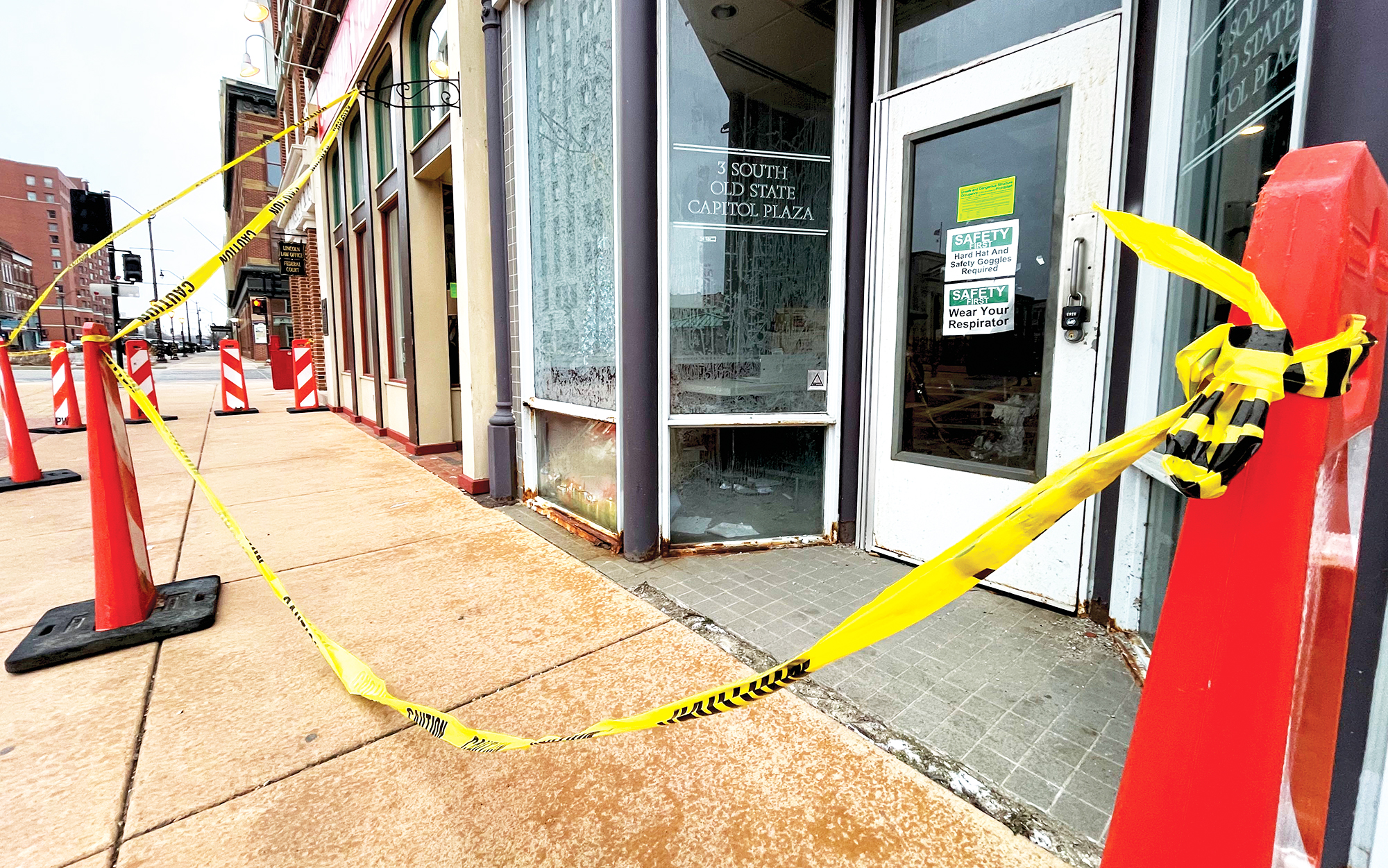 Aaron Acree plans to renovate the building at 3 Old State Capitol Plaza into a combination of commercial and residential units.

Aaron Acree
Aaron Acree, owner and construction manager of Michael von Behren Builder, Inc., purchased the building at 3 Old State Capitol Plaza in 2020 after the roof collapsed. Located between the Lincoln-Herndon Law Office and the former Robbie’s Restaurant, now an art gallery and cafe, it once housed the Greater Springfield Chamber of Commerce. Along with work to stabilize the structure, Acree is in the design phase, planning for a total of nine residential units primarily on the second and third stories.

The first floor may be a combination of commercial space and one residential unit, he said. Acree hopes that TIF money can help with a portion of the renovation, and there may also be grants available. His greatest concern is the limit on loan funding based on the appraisal value of downtown buildings that need substantial renovation.

“TIF can provide 20% of the total cost, but you still need to pay prevailing wage, so there’s a big gap. You need to come up with one-third of the cost out of pocket. I’m just not there yet,” Acree said.

Mike Zerkle
Not far away at 619 and 623 Washington St., Mike Zerkle has been the general contractor for renovations and additions to Anvil & Forge Brewing and Distilling Company, where The Foundry Pizza Kitchen will be operating within the taproom. Headed by chef Nathan Peak, the restaurant will share space, basic operating hours and ingredients with the brewery. Featuring whole signature craft pies and daily chef’s choice pizza slices, everything will be made from scratch, in-house, using Anvil & Forge beer in the crust, sauce and other menu offerings, Zerkle said.

The buildings also have two office tenants in the upper stories with plans for first-floor performance space, an arcade room and a rentable private area for medium or large parties, according to Zerkle.
Lakeisha Purchase, Ward 5 Alderwoman, said she has been a hands-on champion for projects in the downtown historic district since her appointment to Springfield City Council in September 2021. One project she has backed will add a rooftop bar and kitchen expansion at Floyd’s Thirst Parlor, 210 S. Fifth St., which is being supported with TIF funding.

She is also enthusiastic about projects underway to redevelop Vinegar Hill Mall, the historic Pasfield House and the old Illinois State Armory, for the positive impact they will have on the neighborhoods south and west of downtown.

“These are important historic places that should be saved, and the neighborhood is excited, because I think they felt they have been neglected in the past,” Purchase said.

Catherine O’Connor is the former manager of local government services at the Illinois Historic Preservation Agency, where she helped to guide and foster landmark designation and historic district incentive programs in communities throughout the state.

TIF 101 and other financial incentives
Ravi Doshi became the city’s tax increment financing (TIF) program administer in October and has adopted a “more boots on the ground” approach to change the face of economic development and business engagement within the city’s Office of Planning and Economic Development.

Doshi is excited about a web-based Incentive Area Lookup tool that he has created. It provides site selection maps so businesses and residents can get information such as the ward they live in, county property tax identifiers, zoning classifications, applicable municipal codes and available financial incentives or grant programs.

One fan of the new tool and the city’s TIF programs is freshman Ward 5 Ald. Lakeisha Purchase. “I feel like the TIF program has had a huge impact on the city, as it focuses on blighted areas, to help property owners bring up property values,” she said. In addition, Purchase points out that the investment in TIF projects has had a spinoff impact, incentivizing other developers to continue the momentum in her ward.
“We have the downtown and properties in Enos Park eligible for TIF, but have seen projects there also spurring on rehab nearby, at Benedictine and (the former) Shop ‘n Save, which are outside the TIF district.”

Purchase said, “I’m encouraged by the progress from north to south in Ward 5.” She noted several recent redevelopment projects that were funded by TIF, including the new YMCA and the Illinois REALTORS’® Bicentennial Plaza project, in addition to ongoing improvements by Springfield Memorial Hospital and HSHS St. John’s Hospital.
Financial incentives and grant programs

The City’s Incentive Area Lookup tool will help residents find out if they are eligible for financial programs such as:
• TIF grants of 10% of the purchase price of a single-family home, up to $20,000, available to veterans and first responders who buy houses in qualified areas of the city. Contact: Mesfin Lenth, 217-789-2377 ext. 5473
• Community Development Block Grant funding which makes 0% loans available to subsidize, rehabilitate and improve residential housing. Contact: Veronica Tellez, 217-789-2377 ext. 5456
• 50/50 matching grants for exterior renovation projects for owner-occupied homes in qualified low-income areas of the city. For more information, call 217-789-2377 ext. 5473
• Commercial TIF program grants help businesses in districts throughout the city to acquire property, prepare sites, improve infrastructure and renovate buildings. Contact Ravi Doshi, 217-789-2377 ext. 5477.