“What really defines somebody’s health is much more what happens outside the hospital than what happens inside,” explains Dr. Sameer Vohra, chair of population science and policy at SIU School of Medicine in Springfield. “Around 80% of your health outcomes, arguably more, are determined by social determinants of health,” which include race and ethnicity, educational level, income, employment, affordable housing, transportation, neighborhood and community.

Dr. Tracey Smith, director of programs and community health at the Illinois Public Health Association, says the term social determinants of health “just adds layers. It helps us to look at the roots and gets down to trauma, racism – that whole inequity that exists. It’s what used to be called poverty, but that doesn’t paint the whole picture.”

Social determinants of health can greatly affect health outcomes, including life expectancy. According to census tract data from 2010-2015, the life expectancy of a resident of zip code 62703 is 66 years. Contrast that with someone living in 62711 near Lake Springfield, with a life expectancy of 86 years.

According to Vohra, the other component of health care outcomes depends on individual behaviors, such as diet, exercise and involvement in risky behaviors like smoking or other substance abuse. “Those things set the foundation for the other 20%, which is the access to health care that you get.”

COVID-19 has played a role in declining life expectancies, especially as the initial waves of the pandemic “hit communities of color worse, especially Black and brown communities across the country,” explains Vohra. Life expectancy had been dropping slowly in the years before the pandemic, but 600,000 premature deaths as well as decreased access for other health care needs, suicides and overdoses also took their toll, lowering life expectancy rates down to levels not seen since World War II, with people of color disproportionately affected.

David Vail, a licensed clinical social worker and owner of Thrive Center for Wellness, 435 W. Washington, reports that his agency does not have enough staff to meet the needs of those currently seeking help with substance abuse recovery. He attributes this increase to the isolation and stress of COVID-19. “The more isolated people became, the more difficult it was for people to contend with that. People who utilize support groups for recovery lost that sense of connection. It hit the recovery community pretty hard.”

Overdoses in Illinois spiked significantly in the first few months of the stay-at-home order, largely fueled by fentanyl, a synthetic opioid commonly mixed with heroin, but 50-100 times more potent. Sangamon County saw a similar rise in accidental overdoses, with numbers spiking in 2020, after seeing a decline since 2017.

Vail said, “Minorities are always the hardest hit, less apt to get care and have less access to care.” He attributes this to social determinants of health. “It looks genetic, but it is really generational trauma.” Vail reports seeing the age of first use of addictive substances dropping to ages 12 or 13, and the treatment center has seen more adolescent clients than adult clients.

Though suicides nationally have decreased slightly, people of color and Hispanic populations have seen numbers rise. Sangamon County’s suicide rate rose slightly in 2020. As Smith notes, “Isolation is the root cause” of these so-called diseases of despair — suicides and overdoses.
Gina Lathan, CEO of consulting firm Lathan Harris, Inc., brings it all back to economics, which are “socially aligned to your zip code. Your income really dictates where you live and the type of environment you live in.” She explains that even simple things, like having access to fresh fruits and vegetables at an affordable price, vary among zip codes. A person living in poverty is more likely to live in a food desert, with limited access to nutritious foods, and if they do have access, they are more likely to pay a premium price. “You have to take all of that into consideration when you’re having the conversation about quality of life, economics and how social determinants of health directly tie into health outcomes.”

Lathan recently took part in a Citizens Club forum, “Moving Towards Equity in Local Economic Access,” which focused on addressing systemic issues in communities like Springfield, which has the greatest income disparity among US metro areas. Part of the discussion centered on the reform efforts by the Illinois Legislative Black Caucus, revolving around criminal justice and police reform, education and workforce development, economic access and opportunity and health care and human services.

Though only one of these pillars of reform directly involves health care, Lathan asserts, “All four directly tie into health: our physical health, access to health services and understanding our health doesn’t operate within a vacuum.” Education can lay a foundation for economic opportunity, but as Lathan states, “It also aligns directly with the quality of health care that one receives, to a clear understanding of health literacy, as well as the understanding of how the knowledge of physical health, health care and healthy systems can have a direct correlation to healthy behaviors.” 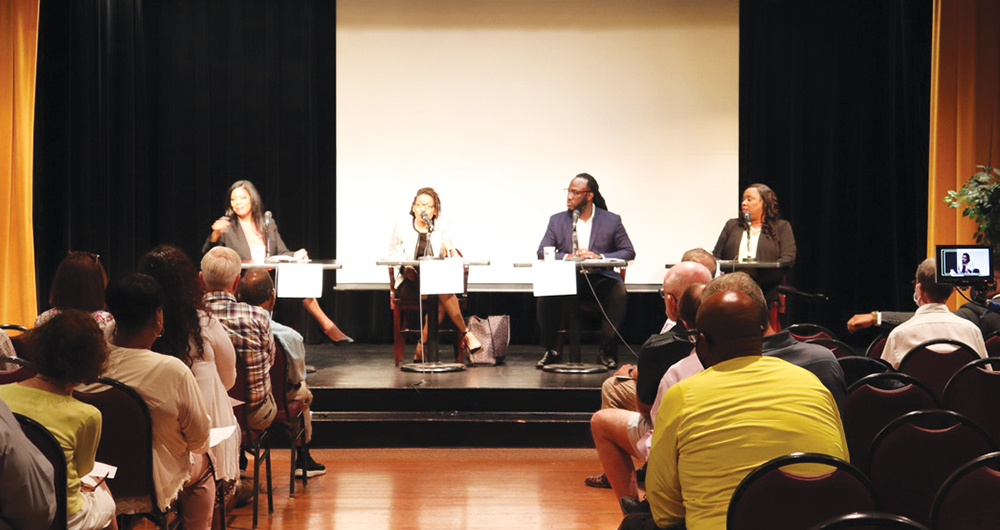 Vohra agrees. “If we go back to the social and structural determinants of health, you have to have the right kind of job, opportunities, education, good access to health care services, and that starts with an acknowledgment that everybody isn’t starting at the same level.” He uses the analogy of providing a bike for a person of average of height, a very tall person and a person in a wheelchair. Giving them all the same bike isn’t helpful. But recognizing the different foundations with which we all start life allows public health institutions to tailor their approaches to address health inequities. “The idea of moving toward equity is a really powerful one and fits across all sectors of our society,” states Vohra.

Smith says that the pandemic shone a spotlight on inequality, and it behooves us all to address these inequalities. “We don’t live in a bubble,” states Smith. “The goal of all of us in the public health world who are doing this work is to make sure that we don’t lose awareness of the inequalities when COVID is gone. We don’t want to get back to what was normal before, because for so many people, normal was inequities, and we want to be better than normal. Normal prior to COVID wasn’t a great place for a lot of people. It’s so important we think about this.”
Lathan agrees, saying, “COVID-19 has highlighted a need to invest in, educate and support those with the least in our community because it improves the overall health of our city.”

There has been a lot of discussion about the revitalization of Springfield’s east side, which Lathan asserts will have a bountiful effect on
Springfield as a whole.

“When one part of our community improves, it benefits the entire city. It’s a safer, healthier and more economically thriving community in our city.” She noted that from a city perspective, an improvement in one area means there are fewer public resources required to provide intervention services and less burden on the health care community.

It also can result in improvements for the business community. “In terms of education, we have educated and thriving students, and also have healthier employees and employers. It is a definitely a community-wide issue,” she said.

Carey Smith is a freelance writer in Springfield who is keenly interested in issues of inequality.