For many Americans, leaning heavily on social service agencies has gotten them through the pandemic. But how have these nonprofits adapted and coped with the increased demand but often reduced fundraising opportunities?

For Midwest Mission Distribution Center, which specializes in disaster relief, the transition was fairly smooth. The organization distributed three times the number of supplies as it did in 2019, despite a decrease in available volunteers. Executive director Chantel Corrie says at the beginning of the pandemic the center jumped right in to supplying N95 masks to first responders and then to hospitals and daycares as needs became apparent.

Donations remained steady throughout the year, and with the addition of state and federal grants, Midwest Mission Distribution Center was able to keep up with not only the demand caused by COVID, but also the usual work of responding to natural disasters. “It was not an option to shut down,” states Corrie.

Marcus Johnson, quality assurance research and reporting officer for Springfield Urban League, said his organization saw an increase in needs in all areas of service: employment, education, housing, health and justice. “With COVID, the needs of those who have struggled have increased in all those areas,” said Johnson. The Urban League provided everything from WiFi hotspots and tutoring to personal protective equipment and rental assistance. Johnson notes they are working hard so “COVID doesn’t increase disparity between those who have and those who have not.”

Unfortunately, COVID restrictions have prevented in-person fundraisers from taking place, including the annual dinner, which raises money for youth education scholarships. The Urban League has relied on an increase in funding from state and federal grants to bridge the gaps.

While Prairie Center Against Sexual Assault also relies on grant funding, it has been a challenge to raise the matching funds required. According to executive director Catherine Walters, it has been a difficult year financially. Donations are down by 30%, with their donor base being mostly “the average Joe who sends $50-100.” The nonprofit has struggled to raise the funds required to match 10% of federal and state monies it receives. “We’ve risen to the challenge, trying to be resilient,” said Walters. “The hardest part is in deciding what to cut or what to do, because you don’t know if you’ll have the match.”

Walters says she was surprised to see an increase in demand for services during the pandemic. They normally meet with recent victims of sexual assault in hospitals, but had to switch to telephone assistance during the most restrictive period of the pandemic. The organization also provides counseling to adults and children who were previously victimized, and Walter said demand for those services remained steady.

A grant from the Community Foundation for the Land of Lincoln for operating expenses got them through 2020. The biggest fundraiser, Walk a Mile in Her Shoes, is normally held in April to coincide with Sexual Assault Awareness Month. The event was canceled in 2020 and will be held virtually in 2021.

AgeLinc’s executive director, Carolyn Austin, said her organization has always relied on state and federal dollars to provide services for seniors, including Meals on Wheels, respite services, educational programs and referrals to other agencies. While AgeLinc has never done fundraising before, Austin said, “That will be changing in 2021 because of what we saw with COVID.” 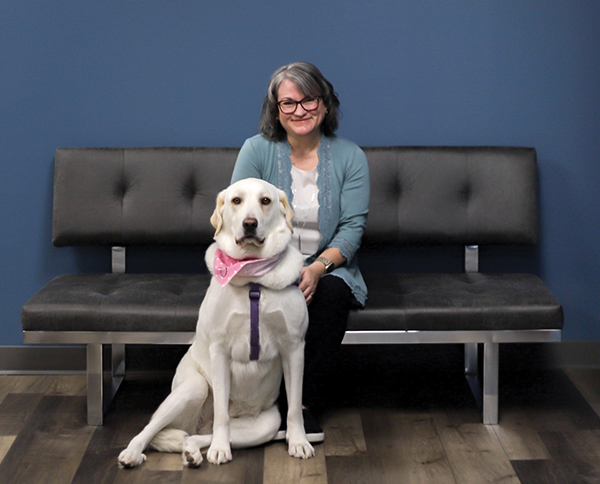 The demand for meal delivery services rose 20%, and there was an increased need for transportation services as well as helping seniors enroll in Medicare. To battle social isolation, AgeLInc began the Friendly Caller Program, recruiting volunteers to check in on seniors weekly.

“We were able to get lots of grants to help with gap services: helping people with groceries, paying rent or utilities and getting assistive devices,” said Austin, who explained that the organization wants to be able tocontinue offering those services post-COVID. Though fundraising efforts have started slowly, the hope is to add more events as COVID restrictions ease, including a gala next February.

Other Springfield-area health and human service providers also report an increase in people struggling to meet basic needs such as housing, food and child care.
Inner City Mission provides housing for homeless families, but Caleb Payne, director of community engagement, said that COVID limited the number of families they could shelter, despite an increase in demand for services. During the shelter-in-place order, Inner City Mission took advantage of the reduced capacity to renovate vacant rooms, since they had never before been empty.

Currently, the shelter is operating around 60% capacity and will continue to add two families weekly until ICM is once again full. According to Payne, the organization receives four to five calls every day from people seeking housing.

While financial contributions initially declined during the first six weeks of the pandemic, giving rebounded and then leveled off. Payne said the organization relies almost entirely on monthly donors and one-time givers, rather than events, so the financial impact has not been as great.

“We have seen an increase in our basic needs pantry – diapers, wipes, infant formula and infant supplies,” says Jen McMillin, executive director of Mini O’Beirne Crisis Nursery. As people are getting vaccinated and things are opening back up, the nursery is providing an increasing number of hours of child care.

In-person fundraising has been replaced with some virtual events. “We are a very giving community here in Springfield and central Illinois,” affirms McMillin. “It feels we’re starting to hit unpause on some of our fundraising efforts. We’re cautious, but optimistic.”

Carey Smith appreciates nonprofit agencies as the helping hands and heart of our community.