Although some amount of property vacancy is desirable to accommodate the natural ebb and flow of business ventures in our community, a long-standing vacancy is not. Ryan McCrady, president and CEO of Springfield Sangamon Growth Alliance, says that part of his job is to “take a look at property to see what barriers there are to redevelopment.” Sometimes this means lining up a grant or a tax increment financing (TIF) opportunity, and McCrady does what he can to help businesses that want to locate in our community.

McCrady notes that one of the benefits of redevelopment is that it typically takes place within existing infrastructure, with sewers, sidewalks and roads already built, and with amenities like bus routes established. He also says that there is an indirect positive impact to nearby areas and points to Pillsbury Mills as an example of the potential for improvement. “Create opportunities, and the neighborhood flourishes.”

Unfortunately, there are often barriers to redevelopment in play to some degree, and Springfield has several significant commercial properties awaiting new use.

Listing agent Curtis Tillett, a commercial real estate broker with The Real Estate Group, says decline in the demand for commercial space in the downtown area is due to the steady decrease of state workers who used to fuel businesses in the area. It’s a snowball effect, as “the overall condition of those buildings has deteriorated over the years due to age, and the fact that there haven’t been businesses in there who have money to do maintenance,” notes Tillett.

The Vinegar Hill Mall complex has been priced as a tear-down, with the asking price of $1,050,000 reflecting only the value of the land the buildings are sitting on, with the exception of the former law office at 625 S. Second St.
As far as what kind of redevelopment could make use of the property, Tillett leans toward residential, specifically, “multifamily apartments for people who are working downtown. Downtown has been a sought-after spot for residential spaces and there’s not an overabundance of them.”

Tillett notes that with a good traffic pattern and close proximity to the statehouse, redevelopment of the Vinegar Hill Mall complex is inevitable. “It will happen; it’s just a matter of when.”

Benedictine University
Nestled on Springfield’s north end close to Lincoln Park, Benedictine University closed its doors after its spring 2018 semester. It had operated as an institute for higher learning under different names since 1929. The 25-acre campus offers 13 buildings with close to 200,000 square feet with an additional one-acre parking lot, according to the original property listing. Numerous attempts to contact the listing agent of record were unsuccessful.

Kirk Jefferis, a Springfield-based commercial broker who specializes in redevelopment, toured the property shortly before it was listed for sale. At that time, he noted that most of the buildings on the campus were in relatively good shape, though some structural deterioration seemed evident.

“As with any property that is not occupied, they tend to deteriorate at an accelerated rate,” notes Jefferis. “The longer it sits vacant, the more quickly its value drops to zero.”

While the campus has potential to be adapted to a mix of residential and commercial use, it faces a major hurdle. According to Jefferis, “With the exception of the library and the gym, the other buildings are all unfriendly with respect to accessibility,” noting that stairs are involved to reach even the first floors of the remaining buildings.

Due to the cost of installing elevators, this leaves the property in an undesirable position – beautiful buildings and green space with a lot of potential, but a large investment that would be required on the front end to make it usable. In Jefferis’ opinion, this makes the multi-million dollar asking price unrealistic and the property more suitable for a philanthropist, instead of a for-profit developer.

The most notable building on campus is the Brinkerhoff House, which was built in 1870 and is listed on the National Register of Historic Places. Jefferis notes the home has been well-maintained. The other jewel of the campus is St. Ursula Hall, a performance hall featuring an elegant stained-glass window. 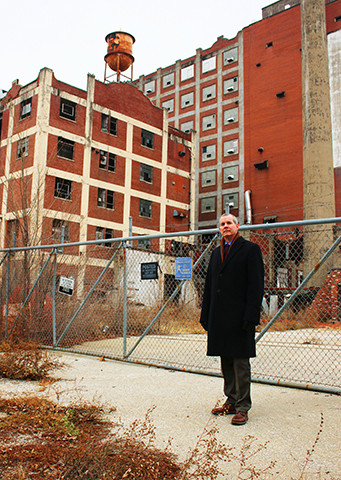 Built just before the Great Depression, Pillsbury Mills employed 1,500 people in its heyday. Producing flour and a variety of baking mixes, it was an anchor of the northeast Springfield neighborhood that bears its name. Following declines in the 1980s, the mill was sold to Cargill in 1991, closing permanently in 2000. Though the property was listed as an active mill, no buyers emerged, and the property was sold to a series of scrappers, ultimately resulting in a prison sentence for one of the current owners after it was revealed he hired workers to cut out asbestos-laden material for disposal in a landfill without adhering to any environmental or safety regulations.

In 2017, the Environmental Protection Agency got involved, spending millions of dollars for an emergency clean-up. It was at this time that Chris Richmond, then the fire marshal for the City of Springfield, became the city’s point person for the Pillsbury Mills cleanup, becoming familiar with the mill, as well as the people in the surrounding neighborhood.

After Richmond’s retirement from the city, he decided to get involved in the redevelopment of the dormant plant, putting together a working group known as Moving Pillsbury Forward (MPF). After holding a series of meetings with consultants as well as people from the neighborhood, the group decided the best way forward was to form a nonprofit. “What we have,” states Richmond, “is an 18-acre site that needs leveled and cleared, and we need local community and government support to get that accomplished on the front end.”

Richmond reasons that once the site is brought down to level ground, it clears the biggest hurdle that developers face in making the site worth reinvestment. Though MPF has sought ideas big and small for the site, the most likely is affordable housing, though light industrial and mixed use have also been mentioned.

Some kind of buffer will be needed, Richmond notes, between the active rail yard on the eastern edge of the property and the area slated for redevelopment on the west. This might be green space or a park, or something more ambitious, such as solar panels that would power 500 homes in the neighborhood to “allow folks in lower-income brackets to be able to participate in green energy.” Ideally, says Richmond, the site will be redeveloped in five years.

Talking with Richmond, his empathy, passion and dedication become apparent. A multi-generational Springfield native with roots on the east side, Richmond describes the value of working directly with people who live in the neighborhood.

“What I’m most proud of is the grassroots start that we had, where we came to the nearby community first and asked them what they wanted to see. I think that’s an important element of this project. We’re all aiming toward best outcomes.”

While COVID-19 has slowed the progress, the group hopes to get back on track as the pandemic ebbs. After its nonprofit status is approved, the first move will be trying to acquire ownership of the site since city officials have indicated the municipality does not intend to take possession of the property due to potential liability issues. After that, applying for grants and continuing community partnerships will be in play. In the immediate future, a volunteer effort to clean trash and other debris from the site will be held April 22.

Carey Smith is a freelance writer from Springfield who appreciates the history and tradition of our city, as well as its ever-evolving nature.