As the Springfield Railway Improvements Project moves toward completion, an increasing number of businesses have been impacted, with more to come. Benmar Sunrooms was the first business to be displaced in 2014, and since then, an additional 18 businesses have had to relocate as a result of work taking place along the rail corridors. Another 15 companies will be impacted as part of the project, in addition to the residential properties that have been acquired.

The Springfield Railway Improvements Project is a $356 million federally-supported part of the Illinois High-Speed Rail Chicago to St. Louis program that will consolidate and streamline rail traffic through Springfield by relocating the Third Street rail traffic to the 10th Street corridor, with several underpasses constructed throughout the city along the six-mile improvement zone, as well as the 19th Street corridor. Scheduled to be completed in late 2025, the project aims to increase safety, enhance livability by decreasing noise and pollution and diminish barriers in neighborhoods throughout the city.

A Springfield-Sangamon County Transportation Center will be constructed downtown, as an intermodal facility that will combine Springfield Mass Transit District buses, Amtrak, taxis, intercity buses and paratransit vehicles under one roof, with an adjacent parking garage. Hanson Professional Services is coordinating all aspects of the project, from property acquisition to construction of underpasses and overpasses, rail lines and the transportation hub.

Eve Blackwell-Lewis has served as the ombudsperson for the project since 2015, helping to facilitate communication and to advocate for residential and business owners whose properties are acquired through eminent domain. Blackwell-Lewis is an attorney who retired from the state of Illinois and a Springfield resident who lives along the 10th Street corridor.

“I am a watchdog,” says Blackwell-Lewis, “making sure that the people being relocated or moved are treated fairly and in accordance with the law and regulations.”

Some business owners have expressed dissatisfaction with the purchase offers from the City of Springfield, and Blackwell-Lewis says there is good reason for this, as business owners do not enjoy the same regulatory benefits as home owners. When residential housing is acquired, homeowners must be moved to a home of similar size and value, regardless of whether the cost is significantly more.

This is not the case with businesses. Rather, business owners are offered the appraised value of their property. As Blackwell-Lewis explains, “They appraise the building, but the building isn’t worth as much as the business as a whole. It can cost them a lot to move into a new building that is comparable. Sometimes they have to go back into debt to do so.” 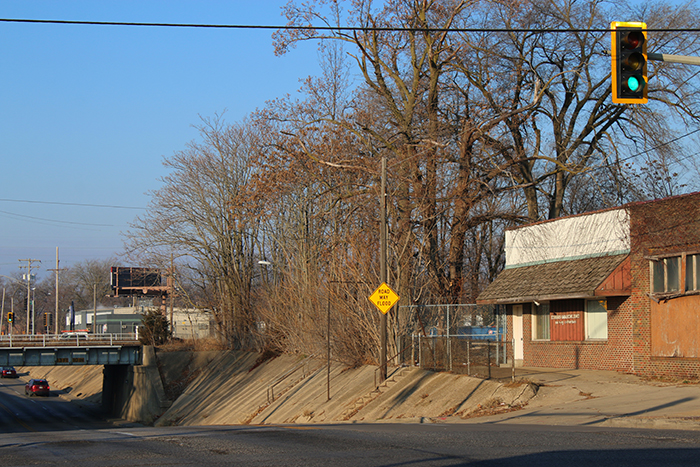 Mason Evans, Inc. is in the process of relocating to 2200 E. Clearlake but owner Lester Mason said he had to auction off some of his equipment in order to make the smaller location work.

Evans-Mason, Inc.
Lester Mason is president and CEO of Evans-Mason, Inc., a family-owned and operated business for over 55 years that focuses on concrete, brickwork and stone masonry. He says it took him a year to negotiate a purchase price for his property at 1021 S. Grand Avenue East, and he held off on pursuing a new location until he knew how much he would be receiving for his current building. Once he had that information, he coordinated a move within two weeks of learning about an available property at 2200 Clearlake Ave.

“Eminent domain is something that I wouldn’t wish on anybody. It’s not something that is welcome,” he said. Mason describes the hardship of having to move his established business when his compensation was significantly less than the cost of purchasing a suitable similar-sized building. Unwilling to go into debt, he held an auction to sell equipment that would not fit into the new location. “The negotiations for businesses are just not a fair process,” says Mason. “Everything was paid for. I don’t have an overhead cost here (at South Grand).”

Adding to the strain of moving is the inability to bid work during the process. “It’s been a full year of trying to do this thing,” remarks Mason. “I didn’t know where I could move until I knew the value. How we arrived at where we’re at was very contentious.” Mason plans to be fully operational in the new location by late December 2020.

Kwik-Wall Company
Kwik-Wall Company moved operations from 1010 E. Edwards to the former H.D. Smith warehouse at 4650 Industrial Avenue in July 2020. Kwik-Wall, maker of portable aluminum and glass partitions, was founded in Springfield in 1961, and current owner Mike Hoyle purchased the company in 2006.

According to Hoyle, the process of eminent domain was fraught with frustrating and difficult moments, starting in 2017 when he was originally told funding was in place. He moved ahead with purchasing the former Altorfer building at 4200 Rodger St. in Industrial Park as he felt his options for finding an available and suitable 80,000-square-foot building were limited. However, Hoyle said, “After I bought it, months later I was informed they didn’t really have the funding for it, and wouldn’t have the money for many more years.”

Concerned about how long he would have to cover the mortgages on his newly purchased building and East Edwards location, Hoyle decided to lease out the Industrial Park property. He negotiated with Hanson Professional Services and the city for the purchase of his building on Edwards, which he ultimately feels was fairly valued. “Hanson has been really good in helping to facilitate and guide me through the process in as much as they can,” he said. “Dealing with Hanson was a good experience. Dealing with the city was frustrating.”

After then purchasing the former H.D. Smith warehouse in December 2019, Hoyle spent an estimated $1.5-2 million to get the building ready for use by Kwik-Wall.
“It’s taken 3000-4000 manpower hours on trying to lay out the building. It’s a lot of pressure and stress,” remarks Hoyle, with the business completely shut down for several weeks during the move and 75 employees still on the payroll, which he notes is not a reimbursable expense. “We’ve had a significant financial strain on the company.”

Hoyle says he is pleased with the new location, though trying to get permits to build additional warehouse space to house materials has been difficult. “The building is nicer and newer, but I didn’t ask for it, and it’s been a painful process.” 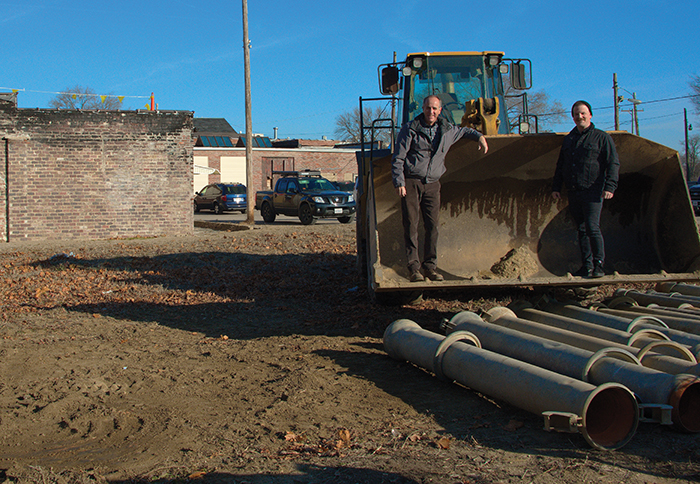 Kirk Jefferies, Dave Matthews and Chip Kennedy (not pictured) are partnering on a new food court venue called The Railyard.

The Railyard
Kirk Jefferis, a real estate broker and owner of CityScape Real Estate at 2160 S. Sixth, has helped two businesses, Persian Rug Center and Murphy Rug and Furniture Cleaners, relocate from Ash and Ninth streets to the present location at 2222 S. Sixth. “That went fairly smoothly,” remarks Jefferis, “with Hanson handling transactions for the city. They seem to be – maybe not all the time – but usually fairly good in their pricing in what they offer.”

Jefferis bought the property at 2242 S. Sixth near his office for parking and also to control the view for the businesses he owns nearby. The former Gallagher’s Steakhouse and later Charlie R’s was being remodeled to become Black Ox Steakhouse when a fire consumed the buildings on the site earlier this year.
Teaming up with Dave Matthews, a California transplant with 15 years of experience as a chef, and Chip Kennedy, a local restaurateur and chef, both with a variety of business venture experience, Jefferis plans to open The Railyard in April 2021. Matthews describes The Railyard as “a really cool outdoor dining establishment that will have a variety of cuisines to appeal to a lot of people.”

The remaining building on the property will be remodeled to become a taqueria, with a limited amount of indoor seating, plus restrooms. Outside, in a transformed green space, three shipping containers will provide a variety of food options. “One of my hobbies is making ice cream,” says Jefferis, “so one of the shipping containers will be a creamery. One will feature Texas-style barbeque. One will have ramen bowls and sushi.”

Jefferis personally owned two properties that the city acquired and feels fairly compensated, though he empathizes with business owners who believe they were not given a fair price for their property.

“We all have an opinion of what our property is worth. Sometimes we’re emotionally invested and sometimes not, and we all want to be treated fairly,” he said.
As far as the long-term benefits of the rail project, Jefferis remarks, “I think that the collateral damage is probably minimal compared to the potential benefit. It improves the image of Springfield, improves the livability and it’s a nice place to live.”

Carey Smith is a freelance writer who lives in Springfield and can hear the train traffic on both the Third Street and 10th Street corridors.