Businesses find ways to help others despite their own challenges 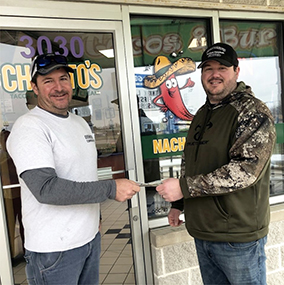 Fortunately for Chad Reese, owner of Chadito’s Mexican American Grill, when dine-in restaurants were forced to close he was able to continue operations since both locations at 3030 S. Sixth St. and 6490 N. Walnut Street Rd. are equipped with a drive-thru.

Reese said, “Business owners shoulder the daily responsibility of making sure their employees are taken care of.” However, as COVID-19 began spreading throughout Illinois and into Sangamon County, the staff were beginning to wonder how much longer they would continue to get a paycheck and what that would mean for their families.

Reese said, “I employ quite a few single moms, and once the schools closed, they were voicing concerns about how kids were going to eat since schools serve breakfast and lunch and that may be the only food the kids get in a day.”

Concern over children being hungry weighed heavily on Reese’s mind, and he decided to offer free meals to kids. He said, “When the pandemic occurred, we just started doing it. We posted the program on Facebook and it was shared over 6,000 times. We started serving 40-60 free kid’s meals a day.”

At that rate, Reese knew he would need help financially in order to keep pace. Reese credits his wife with the concept that has become known as “Give a Taco.” Reese said customers who visit either location can pay it forward and buy a hot meal for a school-aged child in need.  Then, when a child comes to the restaurant, all they have to say is they need a meal: No purchase required, no questions asked, no judgement.

Reese said that when larger donations started coming in, he knew they were on to something, “that we could really help some people in need. We’ve served more than 1,000 meals in just over three weeks.”

Reese said, “This whole ordeal has opened up another side of life for me. I can’t even explain the generosity that people have shown to not only us, but to the community at large. We are just trying to do our part.” 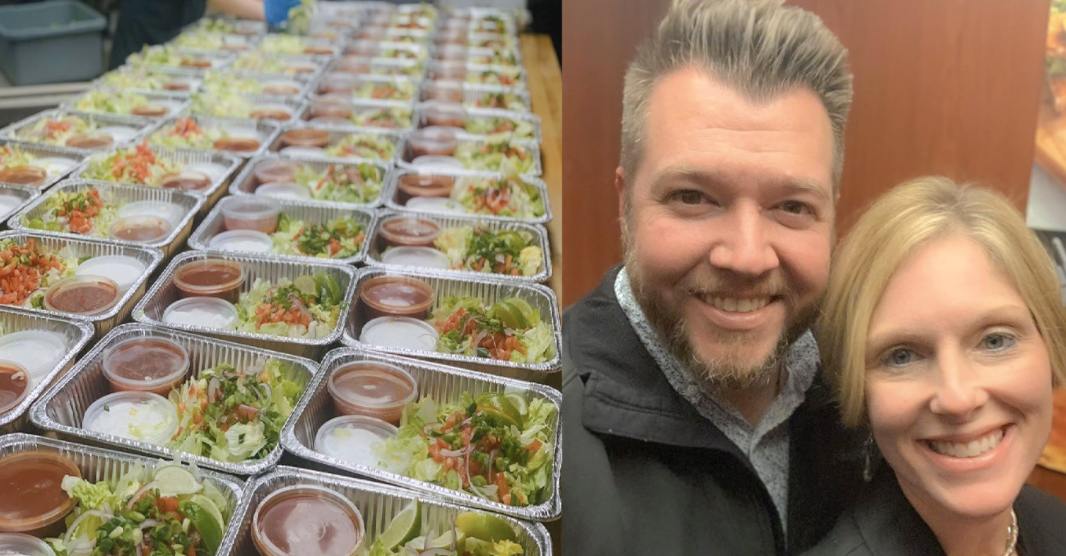 Brian and Melissa Reilly, owners of Cured Catering in Dawson, have been in business for three years and never imagined business coming to a screeching halt. Brian Reilly said, “In catering, there are slow months and busy months. We typically have 40-plus weddings booked per year, but this is unheard of. Even on slow months you have events and revenue coming in.”

Reilly continued, “In the first week of March it got very real, especially when the universities started shutting down. Events scheduled in June started to cancel. That’s when we knew we weren’t going to get a paycheck for a while. You either ride it out or find some way to continue to do what you do and support the community.”

After working in the industry for 25 years, Reilly said he knows how devasting missing even a paycheck or two would be to many people in food service. One night when he couldn’t sleep, he came up with the idea of feeding food service workers who have lost their jobs due to restaurant closures.

Reilly wanted to use up the food in his inventory so it would not go to waste, but he realized he would need to add to it in order to make complete meals. Initially, Reilly hoped to raise $300 in donations to purchase other products and was amazed when a total of $7,000 came pouring in.

About 500 meals are distributed each Tuesday and Thursday evening at the former Eagles Club in Riverton. Recipients line up in the parking lot and meals are delivered to each car, with additional deliveries to about 20 people per night who cannot come to the distribution site.

Reilly said he would like to feed more people, but safety comes first. “My kitchen staff consists of me, my family members and one sous chef. That’s all. People have offered to help, but I want to keep people safe.”

Linda Gudgel of Casey’s Pub, 2200 Meadowbrook Rd., was interested in joining the effort as well, so she started Staff Meals X2 to feed service industry workers, health care workers or any family that is in need. Staff Meals X2 has its own Facebook page and GoFundMe account and distributes meals on Wednesday evenings and other nights in the Casey’s Pub parking lot.

Reilly is thankful for everyone who has come together to make this a reality and said even his kids help by putting napkins in all of the meal boxes.

“The community has been amazing. It’s very humbling to see how quickly you can get into a situation where you don’t know where your next meal is coming from. These people who are coming through to get meals are people who are not normally in this situation.” 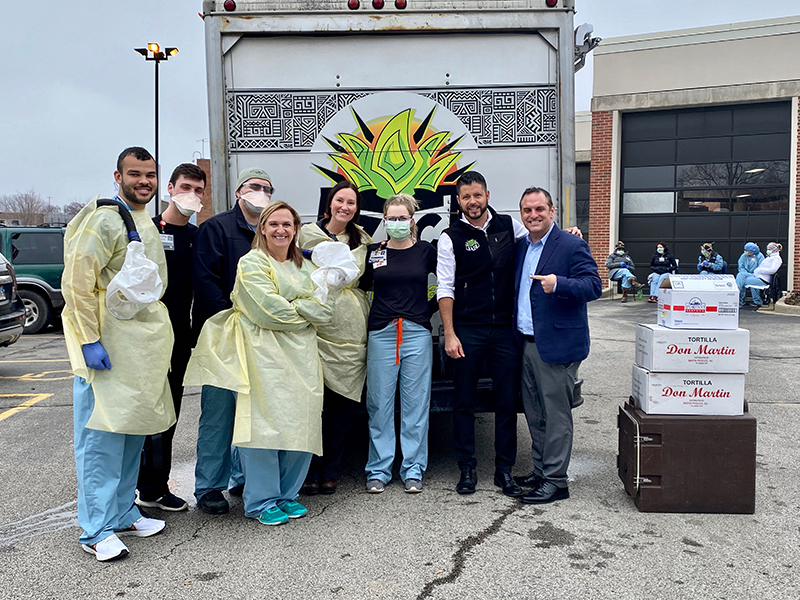 Zach Rambach, owner of Rambach Insurance Agency, was impacted by a Facebook post his sister-in-law, Jenni Friedman, a nurse in Memorial Medical Center’s emergency department, made that read, “I stayed at work for you — you stay at home for us.” Rambach said he understands the gravity of the situation with COVID-19, especially the impact on health care professionals.

Rambach talked to his mother-in-law, Betsy Goulet, about ways to show their appreciation to frontline staff who are caring for patients with COVID-19 and being exposed to the virus themselves. While placing hearts in windows shows moral support, Rambach wanted to do something more. “It doesn’t have to be a gigantic effort, but every little bit matters. Whether big or small, the efforts add up to be great,” he said.

Rambach spoke to his good friend, Nicholas Paz, owner of Aztca Mexican Grill at 2753 Chatham Rd. in Springfield. Rambach said, “Nico has a very big heart and always wants to give back to the community. He is also hurting from having to temporarily close the doors to his restaurant, but we put together an idea where my insurance agency would sponsor lunch from Aztca, and my mother-in-law and I could help serve lunch to the emergency department nurses at Memorial Medical Center.”

Rambach said, “We safely dropped off 50 prepackaged lunches from Aztca. Although it was just lunch, the gesture went a long way.”

After word got out about the special lunch delivery, other businesses called Paz and wanted to team up.

“Small acts of kindness grow into something greater, and it shows how much the community of Springfield cares,” Rambach said. “I know how great our community is, but seeing some of these efforts by local businesses that are being affected but are still willing to help each other out makes me appreciate this community more than I already did.” 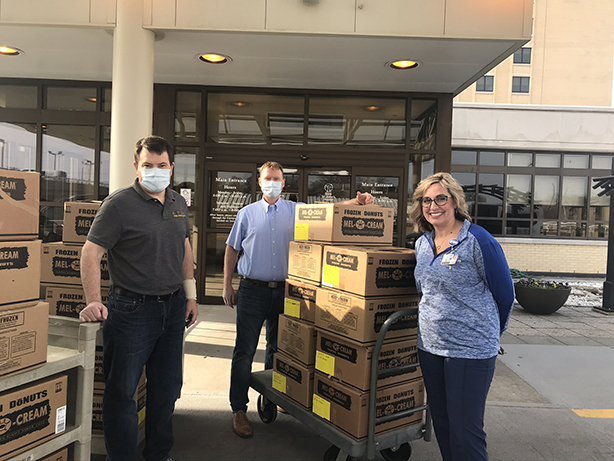 Mel-O-Cream Donuts International and the four retail locations have teamed up to serve up some joy in Springfield during this stressful time.

Chad Larson, co-owner of Mel-O-Cream Donuts International, said, “We can’t provide ventilators, but we can provide donuts and bring a smile to someone’s face.”

Amanda Crossland, who owns and operates the four retail stores, is working with Larson and coordinating the effort to donate and deliver donuts far and wide.

Mel-O-Cream gave a big thank you to health care workers in early April when more than 6,000 donuts were delivered to various locations of HSHS St. John’s, Springfield Clinic and Memorial Medical Center. In addition, Crossland has been making deliveries to Springfield’s first responders, fire departments and police departments.

They also recently delivered more than 2500 donuts to area nursing homes and supportive living facilities. Larson said, “We wanted to make sure the people behind the scenes were getting recognized for the work they do to clean and maintain the facilities.”

Crossland said, “I can’t say enough about the new owners of Mel-O-Cream International, Eric, Chad and Chris Larson.  They mobilized their team and resources to make this happen. We had the privilege of helping organize the efforts with the community.”

Crossland herself is fairly new to the donut world, having purchased the retail locations in July 2019. She has adapted to the mandate to close dine-in restaurants by taking special orders and serving donuts through the drive-up locations at 525 North Grand Ave E. and 3010 S. Sixth St.

Although Mel-O-Cream International has been hit hard by the economic ramifications of the COVID-19 pandemic, the company continues to push forward. Larson said, “I have 100 people on my team and I’ve not laid anyone off. I plan to keep them employed and their paychecks secure. Volume might be down, but we can keep busy by bringing some light to the community and showing that we care. This is the time to do value-added projects and clean our facilities — it keeps staff working.”

Larson has also used this time to make connections with other local business owners such as Will Hoecker of Papo’s Cafe.

Hoecker has been providing free meals to families in need during the stay-at-home order, with Larson adding donuts and homemade bread to Hoecker’s efforts. He said, “On Easter Sunday we gave away 500 dozen donuts and some homemade bread so families could make sandwiches.” In the coming week, he plans to provide about 1,000 loaves of homemade bread along with the meals provided by Papo’s Cafe.

Larson said, “Mel-O-Cream has been in this community for so long that we are Springfield. We are connected to its soul.”