New architect of the Capitol moves the master plan forward

New architect of the Capitol moves the master plan forward

If you haven’t been to the Capitol complex recently, Andrea Aggertt, the new architect of the Capitol, would like to invite you to tour the Capitol and walk the campus.  “There are going to be a lot of exciting things happening in the next five years,” she said.  “It would be nice if people take a look today at what it is like so they have a greater appreciation of what we do, because there are going to be some big changes.”

Aggertt was hired in October 2019, although the position had been vacant since J. Richard Alsop III left in 2015. “With the recent capital bill, the Architect of the Capitol Board thought it was the perfect time to bring someone aboard,” said Aggertt of the multi-year vacancy. “With restarting the master plan that was halted about 10 years ago, they thought it was important to have someone here to facilitate future planning.”

The architect of the Capitol is responsible for much more than the Capitol building itself. The Capitol complex is defined by the land and state buildings in the area bounded by Washington, Third, Cook and Pasfield streets.  Explaining her role, Aggertt stated, “The architect not only oversees these structures but also is responsible for the grounds, walkways and tunnels surrounding or connected to the buildings and facilities that are occupied by the General Assembly and any of its support services.  The architect also monitors restoration, construction, maintenance, repair and landscaping work on the capitol complex.”

The first capital bill in the last decade, Rebuild Illinois, was approved in 2019 and included a $350 million allocation for work at the complex. Those funds will be used for a variety of projects, some still to be determined, but Aggertt explained that the initial work may not be noticeable to the general public.

“The first round of improvements are really the ones the public isn’t going to see, but will help our buildings function better, become more sustainable and be more energy-conscious, because we’re going to get systems that are working better than what they are today,” remarked Aggertt.  She explained that infrastructure projects will include modernizing mechanical, electrical, plumbing and information technology systems in addition to improving safety features such as reconfiguring entries and exits along with upgrading fire alarms, sprinklers and emergency lighting.  “All this will be done with the purpose of making the building safer for future occupants,” said Aggertt.

Long-term projects include improving security by moving parking away from buildings, as well as improving accessibility to be in compliance with the Americans with Disabilities Act (ADA).  “Since we are a historic building, we are exempt from a majority of ADA rules, but over 60% of our main entrances need to be accessible,” Aggertt noted. “The Capitol building currently has one (accessible entrance), but we will be improving on this in the future.”

Also, wayfinding is a priority for improvements, particularly with the many visitors that are drawn to the Capitol complex.  “We want you to understand where you are and be able to find an easy way to get where you want to go,” said Aggertt, who noted that the grounds will also receive attention.

“We want people who live here to bring their visitors who come to town to the Capitol. Walk the grounds, look at the statues and talk about the Illinois history we are all proud to show and talk about.”

Sustainability is also on the list.  “We’re big into recycling, and we’re kicking off a new recycling program,” said Aggertt.  “But as we go forward, we want to be mindful in selecting systems and components of buildings that will help us reduce our carbon footprint.”

Aggertt noted that the recent renovations to the west wing of the Capitol building received a gold Leadership in Energy and Environmental Design (LEED) certification, a rating system developed by the U.S. Green Building Council and now recognized worldwide as a way to measure sustainable and environmentally friendly projects. 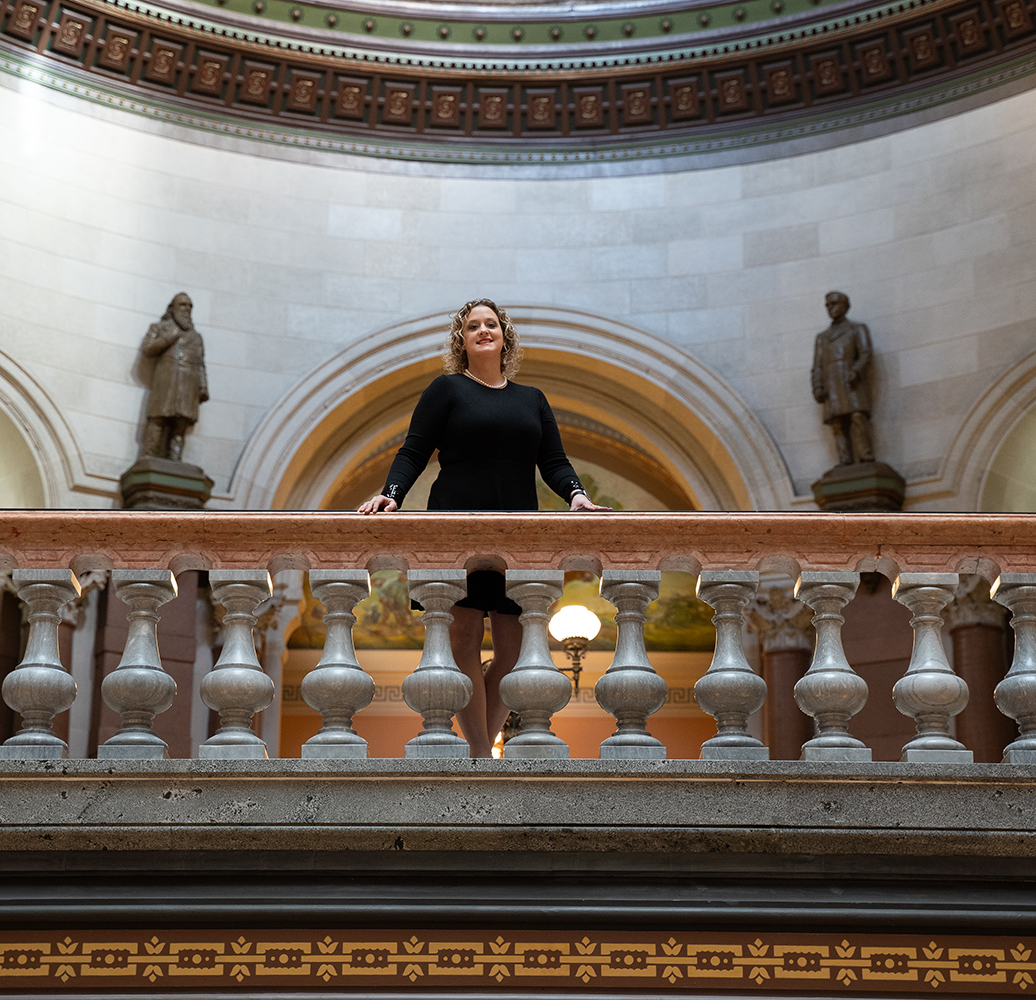 “That would be our plan, that any future buildings continue that trajectory to go for LEED certification,” she said.

Aggertt explained, “We’re in the process now to figure out what has changed over the last 10 years.  Once we get back to 75% completion, then we’ll work toward that final goal.” Eventually, the idea is to return the Capitol building to its original design by removing non-historic elements, and Aggertt said a series of projects over the next five to 10 years will help accomplish that goal.

For now, Aggertt is planning a move to Springfield during the summer and looking forward to a less demanding commute than she has currently. Her husband, John, works just west of Springfield as the general manager of five grain elevators but the couple, along with their children Bennett, age 8, and Taylor, age 2, are currently residing in Bloomington.  A native of Newton, Illinois, Aggertt attended Southern Illinois University at Carbondale and University of Illinois at Urbana-Champaign.  Prior to accepting her current position, Aggertt worked for Shive-Hattery, a national architecture and engineering firm, at its Bloomington office for 15 years.

Aggertt’s excitement about her current position and her ability to work on these upcoming projects is palpable.  “I get to experience these buildings and meet the people who utilize these structures every single day,” she said. “And to see how many people appreciate that, especially the Capitol building, because it’s amazing.”