The new executive vice president for the American Institute of Architects (AIA) Illinois is only the third leader the organization has had in the past 41 years, but after only four months on the job at the organization’s Springfield headquarters she already sees “nothing but great opportunity for our Illinois architects.”

Stacey Pfingsten is a Crescent City, Illinois native who most recently headed the Louisiana Architecture Foundation in New Orleans. She was a self-described “scrappy rabble-rouser” with the grassroots historic preservation advocacy group Preservation Chicago, and before moving to New Orleans four years ago Pfingsten worked for several City of Chicago aldermen and even ran once, albeit unsuccessfully, for 2nd Ward Alderman in Chicago.

Pfingsten feels her historic preservation, advocacy and political experience will be put to good use at AIA Illinois.

“Thanks to AIA’s work this past year we received some new vertical construction dollars in the new Illinois capital construction bill,” Pfingsten said. “We also have 8,000 buildings in deferred maintenance statewide which could help put our architects to work to get those buildings up to code and re-purpose those that are vacant.”

Pfingsten took over the AIA Illinois leadership role from Mike Waldinger, who had served for the past 18 years. Shirley Anderson headed the organization for 23 years before Waldinger took over.

“AIA Illinois is really lucky because they have had some very strong leaders,” Pfingsten said. “It’s pretty amazing for the organization to have that kind of cohesive, strong leadership for so long.”

Pfingsten wants AIA Illinois to become even more involved in communities throughout the state. She aims to bring back the CANstruction program of several years ago, where architects and engineers built masterpieces for display from canned food items, after which the cans were donated to local food pantries. Pfingsten hopes the next CANstruction can be displayed at the State Capitol. She also wants to become more involved in Downtown Springfield Inc.’s architectural tours.

Pfingsten would like to turn the AIA Illinois’ 200 Great Places list of architectural wonders into a children’s coloring book and said her own childhood experience shows it’s never too early to instill an appreciation for good design.

“I remember this day very vividly, the first real piece of architecture I saw was the Frank Lloyd Wright-designed B. Harley Bradley House in Kankakee.” Pfingsten said. “I was in third grade, and I remember pulling up and seeing that house, and it really stuck with me, that first experience of seeing a masterpiece of architecture.” 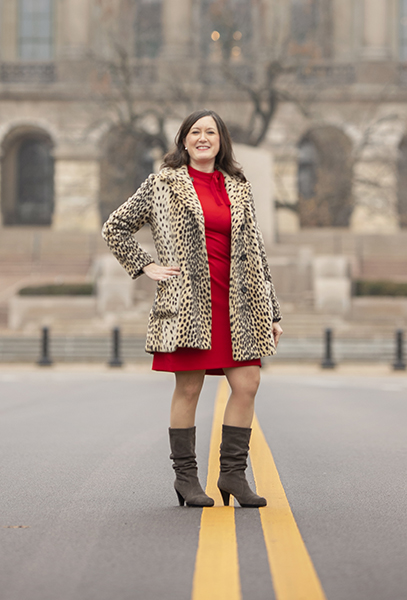 Pfingsten’s six-week trip to Europe right after attaining a bachelor’s degree at Eastern Illinois University helped to convince her that if 13th-century castles and other historic treasures could still be used for modern purposes, there’s no reason the much younger buildings from the 1800s onward in Illinois couldn’t be preserved and re-used. That’s why she has a particular issue with the Springfield-Sangamon Growth Alliance (SSGA) proposal to demolish several city blocks’ worth of buildings, including the historic structure that houses AIA Illinois’ headquarters at 201 E. Adams, to make way for a new downtown campus district for the University of Illinois at Springfield.

“These types of plans where we are just going to demolish entire thriving blocks of downtown, that’s something you heard about with urban renewal in the 1960s, and I thought we had learned from those lessons,” Pfingsten said. “I think UIS coming here would be a great thing, but to take what I feel is much of the downtown away would be a big mistake.”

“I have seen colleges successfully grow their campuses by being infill for vacant lots or utilizing historic buildings,” Pfingsten said. “There’s a lot of opportunity for UIS to really be a part of the community and our architects would love to work with the SSGA on that.”

Janeen Harrell, the AIA Illinois president-elect and an associate with GREC Architects, LLC, of Chicago, will be working closely with Pfingsten in the coming year.

“Stacey already seemed invested in the organization even before getting the job and she had a track record of being effective at bringing different groups together and advocating for the profession,” said Harrell, who added that architects are good problem solvers who should be a part of any planning or building process.

“We have been rigorously trained to protect the public’s health, safety and welfare, and that is a really important reason why people should work with a licensed architect.”

AIA Illinois’ 2019 board president Terry Moeller, vice president at Wight & Company, Chicago, is pleased with the selection of Pfingsten to head the statewide organization.

“We wanted a good communicator, a collaborator, a motivating leader with a clear strategic mindset, a passion for design, a desire to advocate for good design in the profession and an effective administrator,” Moeller said. Pfingsten fits those criteria, he said, and Moeller also agrees with her focus on preserving and re-using historic buildings.

“In my mind, there is no building as sustainable as one that is already there,” Moeller said.