We can have a university presence without mass demolitions

As a group of nonprofit organizations that are located in, invested in and committed to the future and vitality of downtown Springfield, we voice our concerns over the preliminary proposal from the Springfield-Sangamon Growth Alliance that could result in the demolition of four blocks of existing small businesses and nationally recognized historic buildings. Tearing down these places is not the best path toward creating a university presence in downtown Springfield. We understand and value the benefits of bringing university facilities into our historic downtown. Adding students, faculty and employees as our fellow neighbors could be a win/win, bringing new energy to downtown and generating economic activity for our local businesses. For years, the community has rallied to promote the revitalization of small businesses downtown. We are disappointed to see SSGA propose an initial concept that knocks down the very buildings where these small businesses thrive.

The four-block area is economically vibrant with new and growing businesses. The past several years have seen the opening of Hair of the Dog Barbershop and Dalliance Spa & Salon. Custom Cup expanded into an adjacent storefront in 2016, quadrupling its space. These businesses sought to locate in the historic downtown near Springfield establishments such as the Sangamo Club, Richards & Stehman and JP Kelly’s. Instead of building upon this investment, SSGA’s preliminary plan would require each of these businesses to either close or relocate, with their buildings demolished.

Such a plan is at odds with the Comprehensive Plan for Springfield and other previous reports done by experts in city planning, including the Sustainable Design Assessment Team (SDAT) and Regional / Urban Design Assistance Team (R/UDAT). In these plans, the walkability and historic character of downtown are noted as assets, while gaps in downtown, often from surface parking lots, are marked as challenges. There remains an opportunity in downtown for adaptive reuse of historic buildings along with new construction on vacant and surface parking lots.

Our research indicates that these priorities are consistent with other successful downtown universities, integrating seamlessly into the existing urban fabric. In Davenport, Iowa, Scott Community College rehabilitated and reused two downtown mid-century buildings, sparking the revitalization of the adjacent blocks. When the University of Memphis School of Law needed to expand, school officials decided to relocate downtown, reusing a former federal courthouse and post office building. Urban universities such as Savannah College of Art and Design and Chicago’s Columbia College have grown into existing neighborhoods, mixing new construction with the rehabilitation of historic buildings.

SSGA’s preliminary plan features new construction exclusively, calling for the demolition of 17 buildings listed on the National Register of Historic Places. While a downtown university presence should consider historic building reuse, there are dozens of acres of vacant and surface parking lots within downtown Springfield. These acres represent a blank canvas ready for the university’s program-area creations. 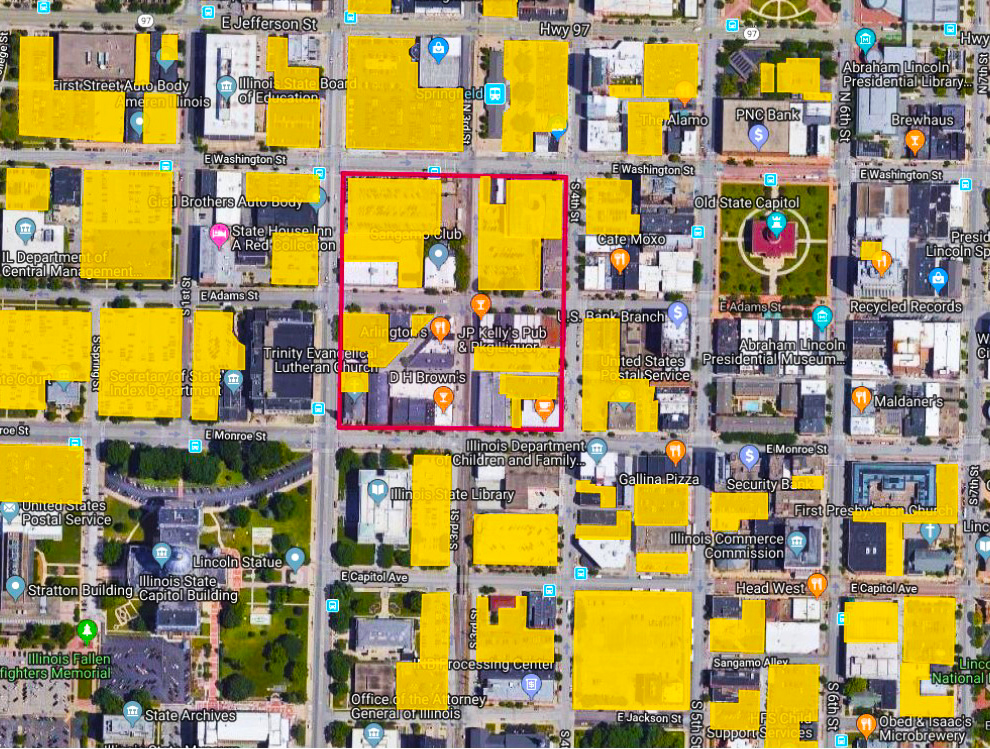 A university presence, strategically planned, has the potential to be an economic engine supporting the continued revitalization of our downtown. With an emphasis on creativity and innovation, planning efforts should prioritize repurposing historic buildings and converting vacant lots into new landmarks. Instead of requiring a new university enclave, student and administrative buildings can integrate into the existing downtown, creating a vibrant urban environment where people want to live, work, play and learn.

Our collective organizations want to see this project happen, and we are ready to lend our expertise. By working together, we can have both a university presence and an expanded beautiful, bustling, historic downtown.