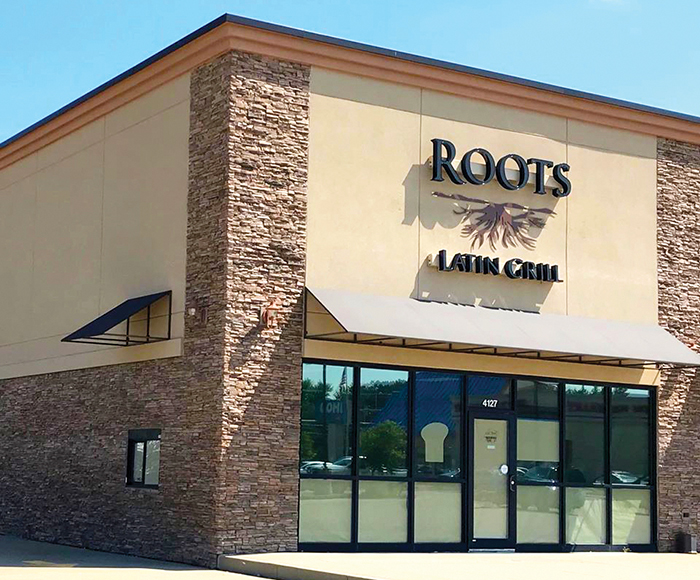 I’ve had the privilege to travel to South America a handful of times.  In some respects, I think it’s the food that keeps drawing me back – a blend of indigenous, Italian, Spanish and Portuguese ingredients and styles.  With Roots Latin Grill now open, maybe I can redirect my frequent flyer miles to new destinations.

Roots is located in a strip mall on West Wabash formerly occupied by Gyro Stop.  The space was entirely redone.  The dark wood tables and bar have a rustic quality to them and evoke the feel of an Argentinian estancia.  We particularly appreciated the one wall with pictures of various South American scenes.  Although perhaps a bit minimalist for some, overall it’s a smart interior.

Roots is currently only open for dinner, although the owner told us he might open for lunch in the future with a limited menu.  And speaking of the owner, we found him very engaging and happy to share his story and love of food.

As one would expect, there’s a full bar.  Roots offers several South American wines together with some drinks that you won’t find in any other restaurant in Springfield – including my personal favorite, the pisco sour.  It was every bit as good as the first one I had in Peru.

The menu itself is an authentic tour of South America.  Most of the continent’s iconic dishes are featured, together with some (at least to me) lesser-known delicacies.  We all appreciated that the menu contained fairly detailed descriptions of each dish. Reading through it, I felt like a kid in a candy store – I didn’t know where to start.  But decisions had to be made, and thankfully there were four of us dining.

We started with provoleta, a classic Argentinian dish consisting of a wedge of provolone cheese broiled to a golden crust and served with chimichurri, a South American condiment ($10).  It’s a dish that I crave and yet, despite sounding so simple, it’s one that I’ve been unable to replicate at home.  This version was spot on and we quickly gobbled it down.  Special thanks to the owner for giving us a few tips on how to make it at home. 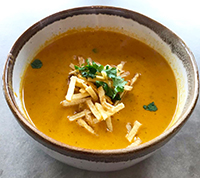 The group also decided to stick with Argentina and share an order of empanadas ($9 for three pieces).  Empanadas are small pastries, and this version was stuffed with beef, black olives, eggs and potatoes.  Although I prefer the baked kind, Roots deep fries its version.  The flavor notes were spot on and they were generously sized.  They also come with chimichurri – and Roots’ version (which is one of the better ones I’ve had in the States) pairs well the dish.

For dinner, I decided on the choripan ($9), which is a classic Argentinian street food consisting of grilled chorizo sausage on French bread served with the ubiquitous chimichurri and salsa criolla (seasoned diced onions and bell peppers).  Although not as good as the ones served by street vendors in Buenos Aires, Roots’ version was delicious and evoked all sorts of good memories.  You know you’re on to something when food does that.

One of my guests tried the Spanish chorizo salad ($9, tomato salad with sherry vinegar, shallots, basil, cilantro and Spanish sausage).  It looked awesome and reportedly tasted just as good.  Same with the pincho ($13, four marinated skirt steak skewers) with oven-roasted potatoes, yucca and a Bolivian-style peanut sauce).  It smelled wonderful and my guest advised that the dish was packed with flavor. 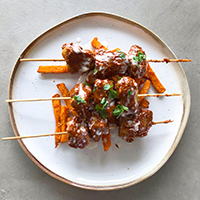 Our last item was the garlic shrimp ($10).  Served seared and with shell on, they were first marinated in lime, butter and garlic.  I managed to grab one, and they were perfectly cooked with just the right amount of seasoning.

Instead of dessert, the owner was gracious enough to bring over a link of morcilla – a Spanish sausage made of pig blood, rice and onions.  It’s not on the menu but very popular in South America.  Only two of us ate it, but it was the real stuff.  Nicely done, Roots.

There were many other choices on the menu that tempted me, like the Bolivian pork sandwich ($8), the pique ($15, marinated steak and mild sausage topped with onions, tomato and jalapenos served over steak fries), and the ceviche ($12, Peruvian classic of raw fish cured in lime juice and served with vegetables).  And that’s why I think Roots is the kind of place that you want to go with friends – so you can share dishes.  Either that, or plan on coming back.

Service was the one weak spot.  I’m not sure how familiar our server was with the menu as he wasn’t able to answer many of our questions.  Again – thanks to the owner for helping out.

Roots is definitely a welcome addition to Springfield’s dining scene.  I plan on being a regular and you should give it a shot.

Thomas Pavlik is an attorney with Delano Law Offices, LLC. He can be reached at tpavlik@delanolaw.com.