Where there’s a will there’s a way, and a year-old group is hoping to motivate nonprofit organizations in the Springfield area to diversify their boards.

The founders of the Building Board Diversity (BBD) initiative have been meeting with and offering training for nonprofit executive directors and current board members to show them what a more diverse governing body can mean to an organization and how to go about getting one.

“There’s a willingness to diversify, and that does more than we realize,” said BBD chair Raychel Yokem, who works at Horace Mann and is a member of the company’s corporate social responsibility committee. “But going back and challenging your board to do that is not an easy task.”

Yokem, who is African-American, has served on nonprofit boards and experienced firsthand what a lack of diversity can mean.

“It’s a situation where everyone on the board lives on the west side of town and I live on the east side of town,” Yokem said. “There is also the perspective of where we hold our events, who we are reaching out to — a golf event, for instance. I had to tell someone that I golfed for the first time in my life this year.”

The BBD’s first step has been to try and gauge the current makeup of area nonprofit boards, but it’s not as simple as black and white.

“We want to know things, even down to what side of town you live on, what is your income, do you consider yourself an ally of the LGBT community or are you a part of that community,” Yokem said. “We want to know these and other things because we want that different perspective.

“We have boards with all women, and our challenge to them is, ‘You need men on your board.’ You’re not going to get the perspective with a fully female board,” Yokem said.

United Way of Central Illinois president and CEO John Kelker is one of the three founders of the BBD initiative. He said the effort is an offshoot of a general board member recruitment effort.

“It didn’t begin with, ‘Let’s get diverse boards.’ It was, ‘Let’s get individuals trained to become board members,’” Kelker said. “And if we’re going to do that, do we want to spend all of our time training old, white men? So let’s train the rest of our community to be board members.”

Kelker said the United Way didn’t have a diverse board a year ago, even though much of the organization’s funding goes toward low-income families, many of them African-American. He said more diversity has been added as board positions become available. It’s often a delicate balance between the bankers and attorneys everyone seems to want on their boards and people who can effectively advocate for those served by the organization.

“What we need to find are people with skills who have a passion for the people we help. But I’ll take somebody who’s passionate over somebody who has skills,” Kelker said. “Skills can be taught; we need the passionate board members who can open doors in those circles of influence.”

Sarah Tapscott is one of the three BBD founders, and she’s also the director of statewide partnerships for Forefront, a statewide membership association for nonprofits and grant makers. Forefront has been arranging diversity training for the BBD effort and has had a number of participants, but Tapscott said it’s still a slow, gradual process to make boards more diverse.

“From the executive directors’ standpoints when we have been training and working with them, it’s not necessarily that they don’t want to increase the diversity among their boards, their culture is just not there yet,” Tapscott said. “They could come in and say, ‘We need to shake this up,’ but the eight or 10 people in their board room might not be ready just yet.”

Tapscott said that up-and-coming corporate and government managers of all ethnic groups are good potential new board members and these people could become future community leaders. But there’s one thing standing in the way of their service on many nonprofit boards.

“Nobody is giving anyone with that job level time off to go to a board meeting at 11 a.m. or 3 p.m.,” Tapscott said. “So again, you are creating that barrier for people of diverse backgrounds to even serve on a board. The state of Illinois is a good example, and that’s one of the largest employers in this town.”

Early on, BBD organizers sought the advice of Dr. Wesley McNeese, executive director of diversity initiatives for SIU School of Medicine and an African-American man who has served on several nonprofit boards.

“I believe Springfield is ready to embrace the concept of true board diversity, but will need to be educated about the problem,” McNeese said. “I have told the group that the lack of racial board diversity is stark in this community.”

Some boards have been making progress by working with BBD. The Community Foundation for the Land of Lincoln has a board nominating committee that uses a selection process to make sure the board is as representative of the community as it can be, according to president and CEO John Stremsterfer.

“Our mission is unique because it’s so broad, and we grant money to hundreds of organizations locally per year; therefore, I feel the conversations we have need all kinds of perspectives,” Stremsterfer said. “So in addition to someone who can make sure the finances are sound from an accounting background, we certainly need thoughtful, caring people to think about how we deploy the finite resources we have to give away.”

Stremsterfer said the Community Foundation looks at race and ethnicity, gender, age range, city versus rural and a number of other factors when trying to recruit new board members.

“I would hope that most every nonprofit board would have some form of matrix or tool they use to assure, to the best of their ability, that they have board members that represent the communities they serve,” Stremsterfer said. “Being intentional in that way, I think, will result in some positive things for diversity.”

Jeanne Stahlheber, CEO of Big Brothers Big Sisters of Central Illinois, said the organization has made a conscious effort to broaden staff and board diversity.

“With intention, we looked at potential board candidates, and our last three board candidates — one of whom joined the board — were all people of color, and the other two have offered to help in more programmatic roles,” Stahlheber said. “We have added a few new board members over this last year, which has closed some of the generational and ethnicity gaps that existed before.

“We are also proud of the diversity that exists with our Springfield staff members, adding three new staff members of color,” Stahlheber said. “Overall, we have made progress, but know there is still work to be done to be a true reflection of the community we serve.”

Carol Harms, the executive director of Senior Services of Central Illinois, said her organization is improving its board diversity but it is a work in progress.

“We need to be a little more open to looking outside of our circles and looking into the community for help,” Harms said. “We want their input into our organization; we want to benefit the whole community. We want to make sure we have a good balance for everyone.”

Harms attended a recent BBD-organized diversity seminar, as did Justin Blandford, a board member of The Outlet, a mentoring organization for fatherless youth. 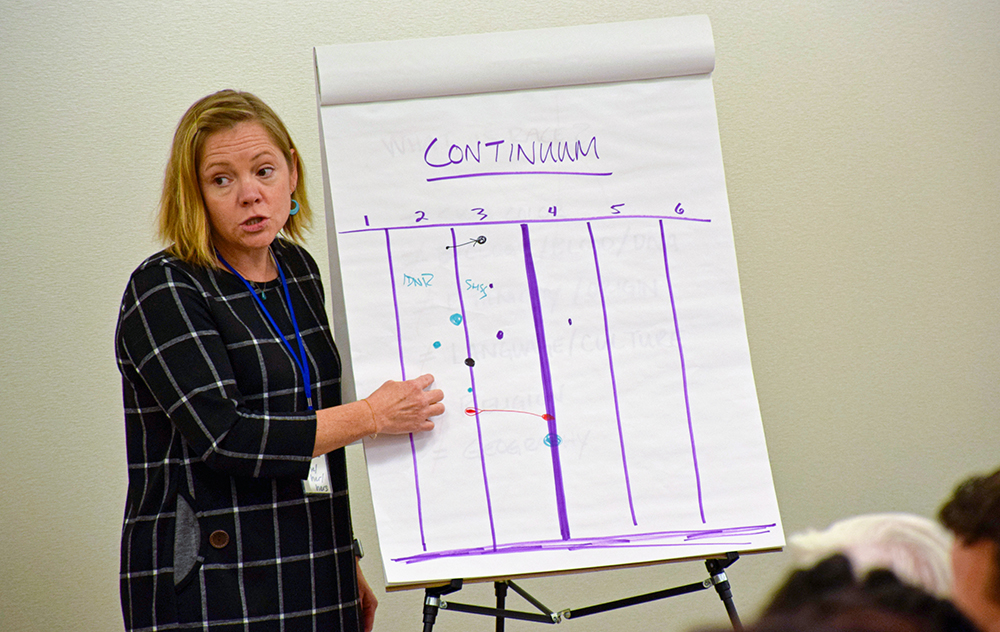 “There is definitely an interest in making our board more diverse. We have a diverse board now and our organization is growing,” Blandford said. “But it’s not just about growth, it’s about establishing goals that can help us as a board develop an anti-racism position and an anti-racism action plan in the community.”

Any board diversity plan needs to take into account the racial perceptions in the Springfield area. The most recent Sangamon County Citizen Survey is a collaborative effort between the UIS Center for State Policy & Leadership, the Community Foundation for the Land of Lincoln, and the United Way of Central Illinois. The survey sampled 8,000 Sangamon County households and found that 25% of all respondents report that being a person of color is a large barrier to career success in Sangamon County. That number rises to 46% of non-white respondents.

The board diversity problem is not unique to Springfield. A Philanthropy News Digest article from February 2019 quoted a Koya Leadership Partners survey that found “although nonprofit board members are aware of the importance of diversity and inclusion, they lack the knowledge, skills, resources, and commitment needed to turn that awareness into action.”

The Koya survey showed that 61% of members felt their board does not adequately reflect the community the organization serves, and 74% indicated their boards did not have a written policy about diversity and inclusion, the Philanthropy News Digest noted.

The BBD organizers know they have their work cut out for them.

“There’s a big gap, and while we think we’re doing some pretty great work, it could be way better with diversity, inclusion and perspective,” BBD chair Yokem said. “But there’s a willingness now to enter the conversation.”

The United Way’s Kelker said boards have to be convinced to diversify, and once they do, “be very intentional.”

The Forefront’s Tapscott is cautiously optimistic that if BBD can put the right people together, area nonprofit boards could start to look different in a few years.

“We need to work with a few nonprofits from beginning to end, find a few people who could serve on their board and match them up, and see where this process goes,” Tapscott said. “Then we could say this is successful, and then we could launch it into a community-wide effort.”

The executive directors of Springfield nonprofits are invited to join BBD in their efforts. Contact Sarah Tapscott at 217-572-1866 or email stapscott@myforefront.org to receive updates on all upcoming BBD activities.