The Illinois State Fairgrounds track, which is historically known for setting the world’s fastest flat track records, hosts two of the 18 events comprising the National Championship American Flat Track pro-racing circuit. The Springfield Mile 1 is held on Memorial Day weekend, with Springfield Mile 2 taking place over Labor Day weekend. A recent partnership with NASCAR and expanded coverage via TV and live-streaming have broadened the audience for the sport beyond small, often rural, Midwestern communities into a more general audience, including a growing number of women.

In 2015, Michael Lock presented a reorganization and growth plan to American Motorcyclist Association Pro-Racing. Now as CEO of its American Flat Track (AFT) racing division, Lock, who is a native of the UK, is leading the comeback of this truly homegrown American racing phenomenon. 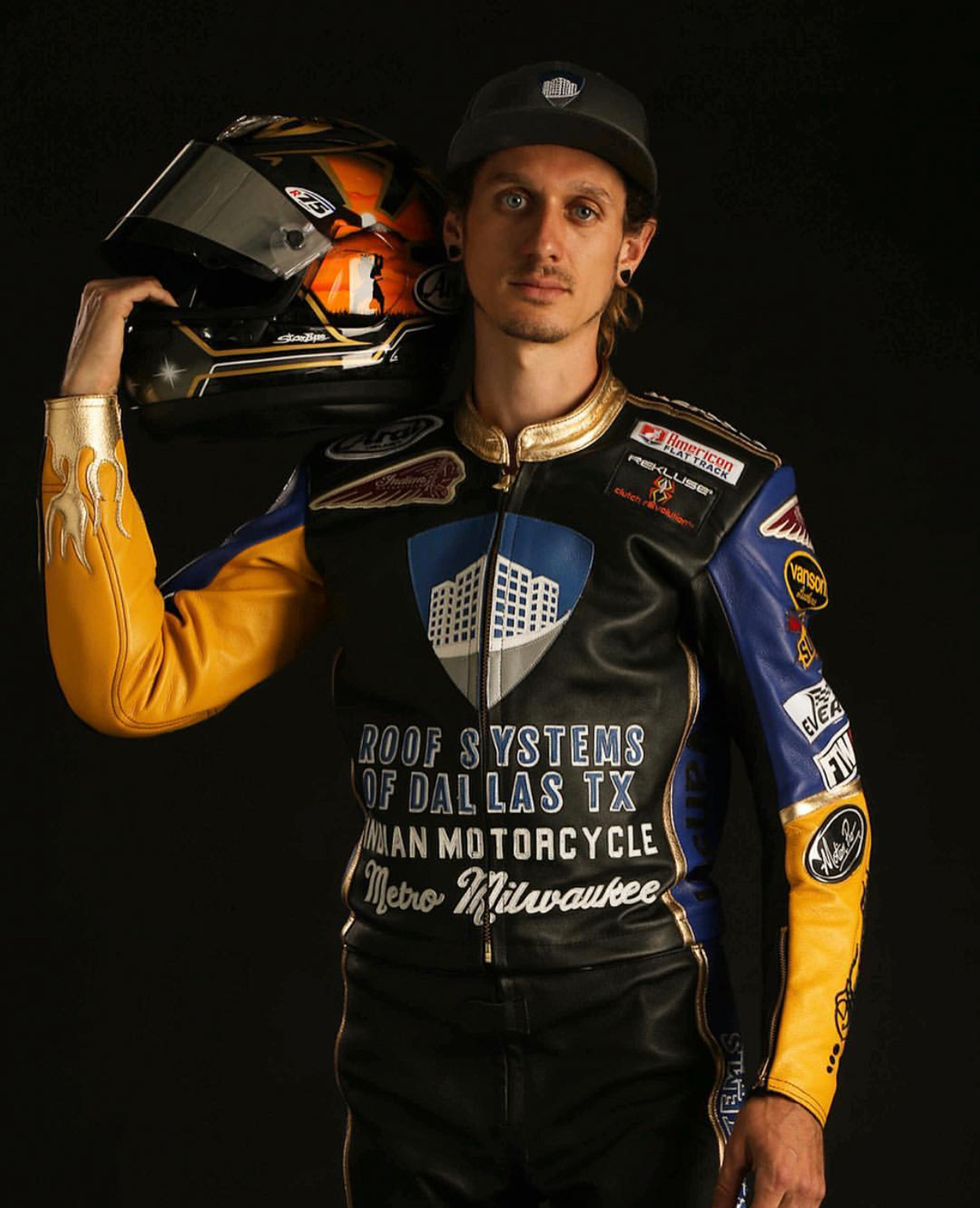 Jeffrey Carver, of Godfrey, is currently in fourth place in the American Flat Track national standings. He is racing in the upcoming Springfield Mile over Labor Day weekend.
PHOTO BY SCOTT TAYLOR FOR ROOF SYSTEMS OF DALLAS, TEXAS

With digital media audience share climbing and interest in Flat Track racing heritage and culture beginning to skyrocket, Lock and the industry are making a number of business decisions that are having some early results. In partnership with NASCAR, they have created an online streaming service called Fanschoice TV, which has been a game-changer, according to Lock.

“The demographic that is comfortable with streaming through apps and YouTube necessarily tends to be younger, and there is less gender stereotyping,” he said. “Our typical audiences were concentrated at about 90% male and white for the last 30-40 years and were the mainstay of the sport.”

During the three years that AFT has been broadcast live on NBC Sports Network, those numbers have started to change. “We found that we get a lot of bleed from programming that is on before us, which has been traditionally male-dominated sports like NASCAR or INDYCAR. But on streaming, our split is 70%-30% (male to female viewers),” Lock explained.

Now, in addition to buying a ticket and watching it live, fans can watch every AFT race anywhere in the world, multiplying the marketing potential. The racers’ suits, equipment, tent awnings, helmets, boots and gear have become monetized brand canvasses.

It’s no accident that this sport, like others, has gone through some lean decades to make its comeback. Once centered around communities and families on racetracks with local sponsors, today’s flat track racing honors its traditional roots as it endeavors to embrace the new. According to Lock, dirt track racing survived because it was a locally based sport, never set up as a commercial industry.

Over the past few years, the vintage racing movement has brought even more fans into the sport. Retired pros and others who are “vintage” themselves are taking decades-old motorcycles out of storage and racing them in special invitational AFT events held in conjunction with the pro circuit.

This Labor Day weekend, Springfield will play host to an AFT pro racing series of competitions on vintage bikes, as well as single cylinder 450cc and premiere twins class 750-990cc racing, according Dave Keisow of Petersburg. He and his wife, Tommra, are semi-retired and act as independent race promoters for the AFT Springfield Mile. Since the Springfield Mile 1 was rained out this past May, Springfield Mile 2 will be a double-header series of events.

Illinois native and team member Jeffrey Carver Jr. is a “privateer” in the high-stakes world of professional flat track racing, A home state favorite, he is one of only three Illinoisans to ever win the Springfield Mile in its eight-decade history, which he did in a memorable 2018 Memoral Day victory.

Carver, 28, whose nickname is “The Wizard,” sees himself as an independent entrepreneur. He takes business risks, in addition to participating in a very risky sport, as he works to build an image through social media and public contacts. Carver’s father and grandfather were also racers, and many legends in the sport hail from small Midwestern communities such as his hometown of Godfrey, Illinois. Those from Michigan are known as the Michigan Mafia, while Illinois is represented by the Fast Boys of Illinois, or FBI.

Although he’s devoted most of his life to the sport, just a few years ago the financial stress made him consider quitting. However, Carver knew it was what he loved to do, even though he realized his peers who had continued on in school had become financially comfortable.

“People told me that I couldn’t make a living at it. But I’ve been racing a motorcycle professionally since 2008 and riding since I was 5 years old. So, I have a lot invested in it,” he said.

One of Carver’s sponsors is Jerry Stinchfield, CEO of Roof Systems in Dallas, Texas. Stinchfield came from humble beginnings but has distinguished himself as a dedicated supporter of AFT and the racers who are making it their lives. He invests six figures annually to support the largest team of racers and crew in AFT.

“When Jerry stepped in, he made funding happen for my mechanic’s salary, a hauler and the two factory Indian motorcycles. Paying for my own fuel and travel, I could make $70,000, but end up spending $80,000,” Carver explained.

In 2017, after NASCAR got involved, Carver said it was the first time he was able to get through the winter without having to borrow money from his parents before going into the new race season. That’s when he decided he could make it, living 200 days a year on the road, without having another job besides racing motorcycles.
With a mantra that racing is 80% mental and only 20% physical, Carver said, “If you can have a calm mental attitude, you can do anything you want.”

Catherine O’Connor has been researching the culture and history of the Springfield Mile, starting with the documents archive housed in Lincoln Library’s Sangamon Valley Collection. After ignoring the noise of motorcycle racing on Springfield’s north end for years, she is looking forward to attending her first Springfield Mile race this month.