Horace Mann hosted the “CEO Action Check Your Blind Spots” mobile tour on May 30, which was open to every staff member. The company promoted it as a continuation of its commitment to having a diverse and inclusive work environment, facilitating open and honest conversations and increasing awareness of unconscious biases.

“Everyone has implicit biases,” says Jennifer Gill, superintendent of Springfield School District 186. “It is a personal journey to discover your own.” Gill was one of several community members invited to tour the bus and participate in the interactive games and virtual reality experiences. Gill says the videos provide conversation starters about how to have conversations in open, honest and safe ways.

CEO Action for Diversity and Inclusion, which organizes the nationwide tours, is a consortium of CEOs that advances diversity and inclusion within the workplace, driven by a realization that these tasks are a societal issue. Marita Zuraitis, president and CEO of Horace Mann, is one of more than 600 CEOs who have signed the pledge to make workplaces trusting places to have conversations about diversity and inclusion, conduct unconscious bias education, and share best — and unsuccessful — practices. Signing the pledge is “a natural extension of what we foster every day at Horace Mann,” says Zuraitis. 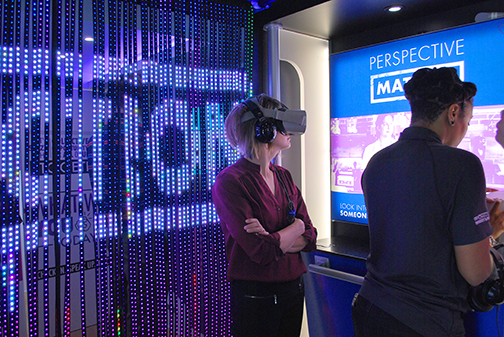 The event on May 30 brought increased recognition to unconscious bias. The bus featured video games where participants clicked a button when observing unconscious bias in an interaction between co-workers, virtual reality demonstrations, videos of people talking about their experiences with biases and questions designed to reveal how culturally diverse your own environment is.

Zuraitis says understanding unconscious bias is important in creating an environment where everyone can reach their full potential. She says it goes beyond traditional biases. For example, men can feel biases if it assumed they don’t have child care responsibilities. The goal is for people to realize everyone has unconscious biases and to consider that when making decisions.

There was a constant stream of employees touring the bus who appeared genuinely excited about the opportunity. One employee called the experience “super cool” and said it helped to promote open and candid conversations. Another commented that it makes you stop and think about things that you don’t always think about.

“It creates awareness across the community,” said Beth Moore, chief human resource officer for Horace Mann. “What’s powerful is that it makes it possible to have conversations that would have been more difficult to have in the past.”
John Kelker, president of United Way of Central Illinois, was another community member who experienced the mobile tour. “We all have blind spots, and this gives clues to slow down and check yourself before you wreck yourself,” he explained. He thanked Horace Mann for its leadership in raising awareness about unconscious biases.

Horace Mann was one of 100 stops the CEO Action mobile tour bus is making across the country in 2019. For more information about the mobile tours, the CEO pledge and a list of companies that have taken the pledge, go to www.ceoaction.com/ceos.

Karen Ackerman Witter started freelance writing after retiring from a 35-year career in Illinois state government. Her goal is to connect people, organizations and ideas to achieve greater results.