Home/Articles/Featured Article/Take a ride to Springfield Carriage Co.
Previous Next 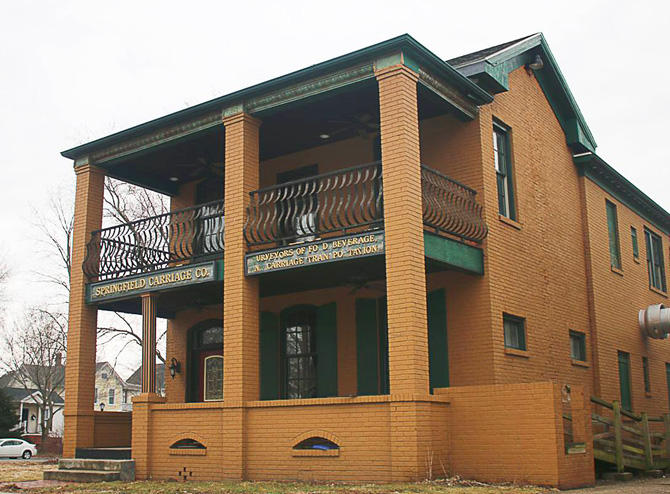 I love the kind of place that you only hear of by word of mouth – it’s like getting let in on a secret. And from the restaurant’s perspective it can be a gutsy play, but is also indicative of pride in what’s being served. And that’s Springfield Carriage Co. – a gem that I’ve heard about from a handful of friends and acquaintances.

Carriage Co. is located just south of the Lincoln Home on Edwards Street. It inhabits a quaint and historic two-story brick structure that was brought back from the brink of ruin in 2007 and that operated as a restaurant of the same name until closing in 2011.

With a front porch extending across the whole front of the building, Carriage Co. offers an appealing sight to hungry visitors. Everything is freshly painted and clean. Walls are dark colored but brightened by various messages scribbled in chalk. (We were invited to add our own offerings but declined.). There’s a tin ceiling, homey accents, a separate bar area and table seating up front. Although we didn’t check it out, we were told that additional seating was available on the second floor.

My guest and I arrived around 11:30 and were one of the first lunch diners. By the time we left, however, Carriage Co. was pretty full. Our fellow diners were a mix of out-of-town tourists who had just checked out Lincoln’s Home and locals. We were particular pleased to hear a family from Michigan claim that Carriage Co.’s horseshoe was the best thing they had had on their 10 day vacation through the Midwest.

Service was exceedingly friendly. One of the owners works the front of the house and the other the kitchen.  Our server was related to an owner. All took pride in what they were doing and were happy to answer our questions and to give us their background and motivations.

Carriage Co.’s menu looks big but is actually pretty tight – after all, it’s open for breakfast, lunch and dinner.  Breakfast offerings were largely takes on traditional items and the dinner menu is limited to a few steaks, chicken and salmon. For picky little ones there is even a kiddie menu. The rest of the menu is comprised of barbecue, shoes, sandwiches and burgers and that’s where we concentrated our efforts.

As we were only two and yet wanted to cover some serious culinary ground, we asked for starter-sized samplers of the smoked beef brisket and pulled pork. Carriage Co. was happy to oblige. Usually a full order costs $12 and comes with fries. Each was clearly made with love – we both appreciated that each sampling came with some delicious bark. Our samples were accompanied by a sweet and tangy BBQ sauce. It was a good way to start the meal.

We then had to decide what to get as our entrees, and the shoes lost out. The burger shoe costs $10 and all others (like the Cuban, Reuben or candied bacon) cost $12. Significantly, we were told that they use the original recipe from the Leland Hotel for their version. The sandwiches and burgers each come with a choice of fresh hand-cut fries or sweet potato fries.
My guest opted for the Philly sandwich ($12), given that our server said it was one of the more popular offerings. It came piled with chopped steak, green peppers, red onion and provolone. I decided on the blue cheese burger ($12). Other offerings that tempted us included the Cuban sandwich ($12 – endorsed by an acquaintance) and the Reuben horseshoe ($12).

For those looking for something different than fries, Carriage Co. has macaroni and cheese, smoked baked beans, potato salad and corn fritters, purported to be a fave of Abe himself (each $4).

My burger, a thinner burger best cooked on the griddle, came out medium-rare as ordered with a very generous helping of pungent blue cheese. Sadly the onion, pickle and tomato were missing. A simple request would have fixed the problem, but I decided to go without and let the burger speak for itself. As good as it was, it needed some brightness from the veggies to pull it all together. My bad.

My guest enjoyed his Philly. Although it was a bit of a mess to eat, I think that’s the point of a Philly – dripping meat and gooey cheese.  It looked like a winner.

We both opted for the hand-cut fries at the suggestion of our server. She advised that, literally, the fries were transformed from a whole potato to fries moments before being dumped into the fryer.  I will generally avoid hand-cut fries as I prefer them crispier, but Carriage Co. did a good job with these – they weren’t flaccid like so many of its peers and were well-salted.  We also liked that we were offered malt vinegar to add that necessary shot of acid.

Carriage Co. certainly has something going on. And if it gets the necessary zoning approval for beer and wine, I can see that dinner service will take off. It’s certainly a place that I hope Springfield embraces, rather than another run to a pedestrian national franchise.