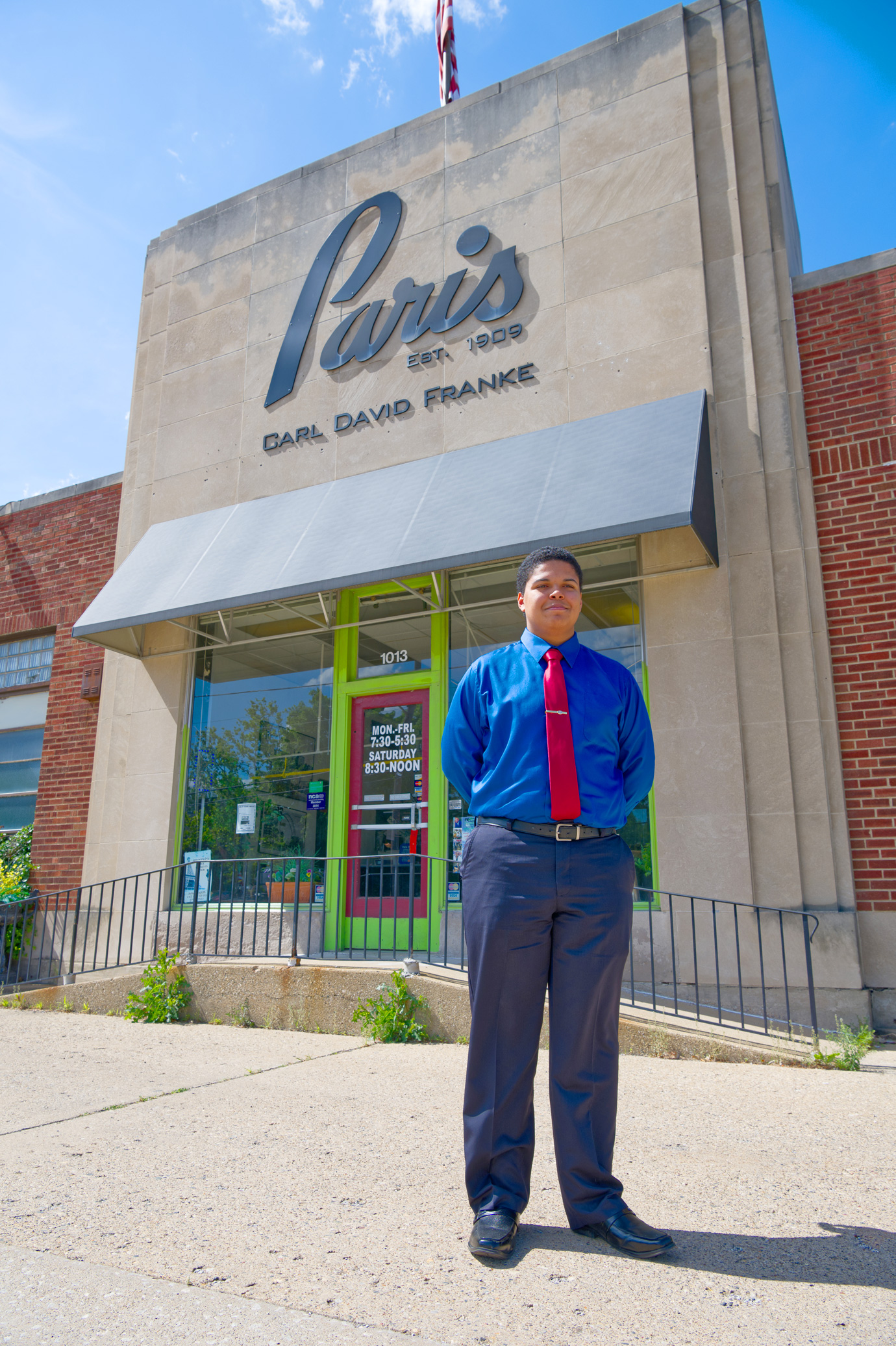 Nathan “Nate” Klughart is living the American dream. As of June 1, the 18-year-old entrepreneur is the new owner of Paris Cleaners, a business owned and operated by the Franke family for the past 110 years. Klughart, a native of Atlanta, Georgia, moved to Springfield about two years ago.

Evan as a child, Klughart had an inclination to become an entrepreneur: “When I was about 10 years old, I thought I could probably do a business by myself. My dad ran a karate school in Georgia and I helped out a lot,” Klughart said. He didn’t picture himself running a karate school, but it made him start thinking about finding the right opportunity.
The youngest of four siblings, Klughart says he was also inspired by his oldest brother, Charles Klughart, Jr., who owns a heating and air conditioning business. He originally thought he could see himself doing the same type of work, so he attended Midwest Technical Institute in Springfield and graduated from the HVAC program in May 2018. Klughart even job shadowed with his brother prior to graduation, but after working in the field for a little while and moving heavy pieces of machinery in the weather extremes of Illinois, Klughart decided this was not the career path for him.

So, back to square one, Klughart embarked upon a new job search. While scrolling through a job seeking website he found an opening at Paris Cleaners, 1013 E. Ash St., for a pants presser. He had never worked in the dry cleaning industry but lived nearby and thought it was worth a shot. He applied, was asked to interview and then, Klughart explained, “I had to talk with Mrs. Franke.”

Bette Franke, 96, is the matriarch of the Franke family, and along with her sons Shep and David, has been an integral part of the day-to-day operations of the family business for decades. Franke later shared with Klughart that during their initial conversation she knew right away that he was the one for the job. And so Klughart began his career at Paris Cleaners as a pants presser.

During his first week on the job, Klughart said, “I didn’t think I would find it appealing when I first started, but that first day — I absolutely adored it. I’ve always enjoyed helping people and making sure they’re happy. With this, I can make people happy in a big way, making sure they look nice and spiffy.”

Klughart caught Franke’s attention with his dedication, enthusiasm and work ethic. She said, “I watched him. He’s a serious young man — the kind of person that is the future of America.”

At the end of his first week as a pant presser, Franke told Klughart that she could see him running the dry cleaning business. Klughart said, “I went out to my car that day thinking she must be joking — does she say this to every new employee? The next day she bugged me about it, which made me think she must be serious.”
Franke was serious and encouraged him to discuss such a big decision with his father, Charles Klughart, Sr. Klughart said, “My father was supportive and said to move ahead if it’s what I wanted to do and see where it goes.”

Klughart said he waited about a week before giving Franke his answer. In that time, Shep Franke, 64, who has been in the business for over 30 years, started training Klughart on the entire dry cleaning process and how to use each piece of equipment. It was during this training period that Klughart said he gained confidence and could see himself running the business. He then told Franke that he was ready to take on the challenge.

For her part, Franke said she was not concerned about Klughart’s age. She pointed out that Carl Franke, the founder of Paris City Cleaners, as it was originally named, was 19 when he decided he would not follow in his father’s footsteps and be a tailor, but instead he would travel to Denver, Colorado, to learn the dry cleaning process and embark upon what his father referred to as a “new fangled business.”

Additionally, Franke said, “The young people of this generation are not all going to college. He’s making an investment in his future.”
Klughart’s father is helping him with the new business, although the two made an agreement to leave work matters at work and not take any disagreements home with them. That philosophy has served them well so far.

Klughart said, “In the mornings, he helps me get the cleaning out. I’m amazed Shep Franke was able to get that much cleaning out by himself. We’ve been running the operations for a few months now, and people say that nothing’s changed.”

Klughart is proud of the fact that the staff have remained, including Dee Dee Lee and Diane Gray, who have been employed at Paris Cleaners for 35 years. Klughart said there was a reason the Franke family kept their employees for so long. “They keep good relationships, talk to people and accommodate them.”
Although he’s not been at the helm long, Klughart has had a some time to develop a vision for the future of Paris Cleaners. Klughart said, “I’ve had some time to think about it, and I want it to grow. I want to have more locations again, not the same locations, but maybe the north side and it would be nice to have a store on on the west side again. Maybe home delivery and delivery to offices.”

Shep Franke has now retired, but he remains on call for the inevitable questions that arise. Klughart said, “A belt broke on a machine the other day, and I gave Shep a call to ask the belt size. He told me the size, we got the belt and were back up and running.”

Franke credits Shep Franke for keeping the business going for the 30-plus years that he invested his time and talents into Paris Cleaners. She said he stopped in one summer and noticed that some machinery needed repaired, so she asked him to help out over the summer and he never left. Franke said, “I could have never accomplished this without him.”
Klughart recognizes all the Franke family has done in order to keep Paris Cleaners going since 1909. For one, they were environmentally aware before it was fashionable. They had re-usable dry cleaning bags, coat hangers made of wood, and when it was necessary to use plastic, it was carefully measured so that there was no waste.
Klughart also said, “I love that the solvent we use to dry clean is petroleum-based and not bad for the environment.” However, during WWII, the war effort needed petroleum and Paris City Cleaners had to answer the call and stop dry cleaning. At the end of WWII, Franke’s husband, “Coke” Franke, the son of Carl Franke, picked up where they left off and built an even better dry cleaning facility.

Klughart is now doing his best to carry on the traditions of Paris Cleaners while also learning something new every day.
“Today, I learned how to fix one of the presses that broke down. We were down two people and needed the presses, but I got out the schematics and tools and fixed it.” Klughart says his HVAC education was not a waste, but good preparation for the next chapter in his life.