A new café with a past

A new café with a past

In the midst of parking lots along Madison Street, across from the Department of Revenue Willard Ice Building, sits 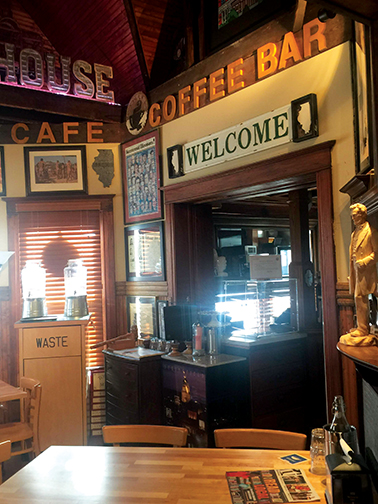 a home built in 1918 by Italian immigrant Peter Leone. It has now been transformed into a coffee shop scheduled to open in early 2019. Tony Leone, Peter’s grandson and owner of the Pasfield House, has created a cozy interior filled with memorabilia.  Leone is a passionate historian and has collected artifacts showcasing Illinois and Springfield history, with his special interest in Lincoln.

The shop will be called Tony Leone’s Innkeepers Café. In addition to coffee, the shop will offer eat-in or grab-and-go lunch items including salads, soups and sandwiches.  Leone culled through his mother’s recipes to find the best ones.  Signature sandwiches will include ham salad, chicken salad and olive nut spread or customers can purchase take-home containers to make sandwiches or pair with crackers.  Les Eastep, who has literally written the book on the history of chili in Springfield, will be providing his chili.

The popular pies baked by Connie DiCenso, owner of the now-closed Coco Café, will be available.  And, a family member from the long-ago Springfield bakery called Rechner’s, which operated from the early 1900s until 1980 at 12th and Reynolds, has agreed to share the bakery’s famous butter cake, which will also be available for sale.

Wooden tables with chairs for two to six people are arranged throughout, and a side room with a larger table offers seating for a small group.  On display is an original Bunn espresso machine, although a more modern machine will be the one used to serve up espresso. Covering the walls are pictures of Springfield homes, Abraham Lincoln, and the Illinois Capitol, with colorful exterior and interior pictures of the dome.

Original and beautiful oak fretwork above archways adds to the interior. The second floor has been opened to a view of the wooden ceiling, brick chimney and railing, now hung with an American flag.

Leone faced difficulties in getting the house renovated. After sitting empty for 30 years, the structure faced condemnation by the city. A house next door in similar condition did not, and Leone continued to work on his property while being fined for doing so. It was with the help of Mayor Langfelder that the work was allowed to continue.

The nearby area has a rich history. In 1819, John Kelley built a cabin at what is now Second and Jefferson.  Soon after, Kelley’s brothers settled and built eight more cabins. Known as the Kelley settlement, it served as the meeting area of lawyers, judges and others. Kelley’s cabin later became the first courthouse in Sangamon County. The Kelley graves stood near the site of the Department of Revenue Willard Ice building before they were moved to Oak Ridge Cemetery.

The Innkeeper Café faces Logan Street, which was named after Lincoln’s law partner, Stephen T. Logan. The new café is a spot that will entice patrons to linger and look at the memorabilia that covers each nook and cranny, as well as the walls from floor to ceiling. History in the décor, as well as in some of the food items, makes Leone’s new venture another connection to the past that has shaped Springfield.

Cinda Ackerman Klickna loves to hear about Springfield and Illinois history and will definitely be a patron when the café opens.