Developer Eric Hoogland has tabled plans for a major redevelopment project on MacArthur Blvd., although Ward 7 Alderman Joe McMenamin says it may still happen in the future.

CEHOG, LLC, an entity controlled by the Hoogland family, was under contract to purchase more than one-and-a-half acres of land at the corner of MacArthur Boulevard and Laurel Street. Curtis Tillett, a broker with The Real Estate Group, originally listed the property for sale at $750,000 in September 2017. The parcel includes a building formerly occupied by the Federated Funeral Directors as well as a vacant law office and a large parking lot along State Street. Hoogland had said he intended to demolish the existing buildings and construct a new strip center, while a large open space would remain on the eastern section of the block to serve as a buffer between the new development and the existing residential homes on State Street.

In February, SBJ reported that the buyer had filed a zoning petition seeking to make the entire parcel S-2 zoning. 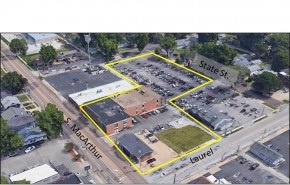 The Springfield Planning and Zoning Commission recommended approval of the change back in February, but the city council delayed taking final action. At the council meeting on May 21, McMenamin announced the zoning petition would be withdrawn due to expiration of the real estate contract.

“You have to be an owner or contract buyer to petition for zoning relief,” he explained, although he said the project was not tabled due to concerns over rezoning, citing support from the MacArthur Boulevard Association and nearby business owners.

McMenamin said, “Both sides wanted a time out; there was some third-party coordination which the buyer wanted to work on further. They are leaving the door open to resuming the transaction later, perhaps coordinating with additional parties. It’s possible an even more comprehensive and significant project will emerge with time.”