ARTICLES AND PHOTOGRAPHY
BY DAVID BLANCHETTE

Joe Bringuet may have married the boss’ daughter for what he jokingly calls “job security,” but after 69 years with the company, he makes sure the fourth-generation members of the family business know they have to begin the same way he did in 1950.
“I started like everybody does here, sweeping the floors and getting acquainted with what’s going on,” said Joe Bringuet, the semi-retired co-owner of Ace Sign Co. in Springfield. “My next job was to prime coat everything and there were no rollers or sprayers, it was all done with a big three or four-inch paintbrush using oil-based, leaded paint.” 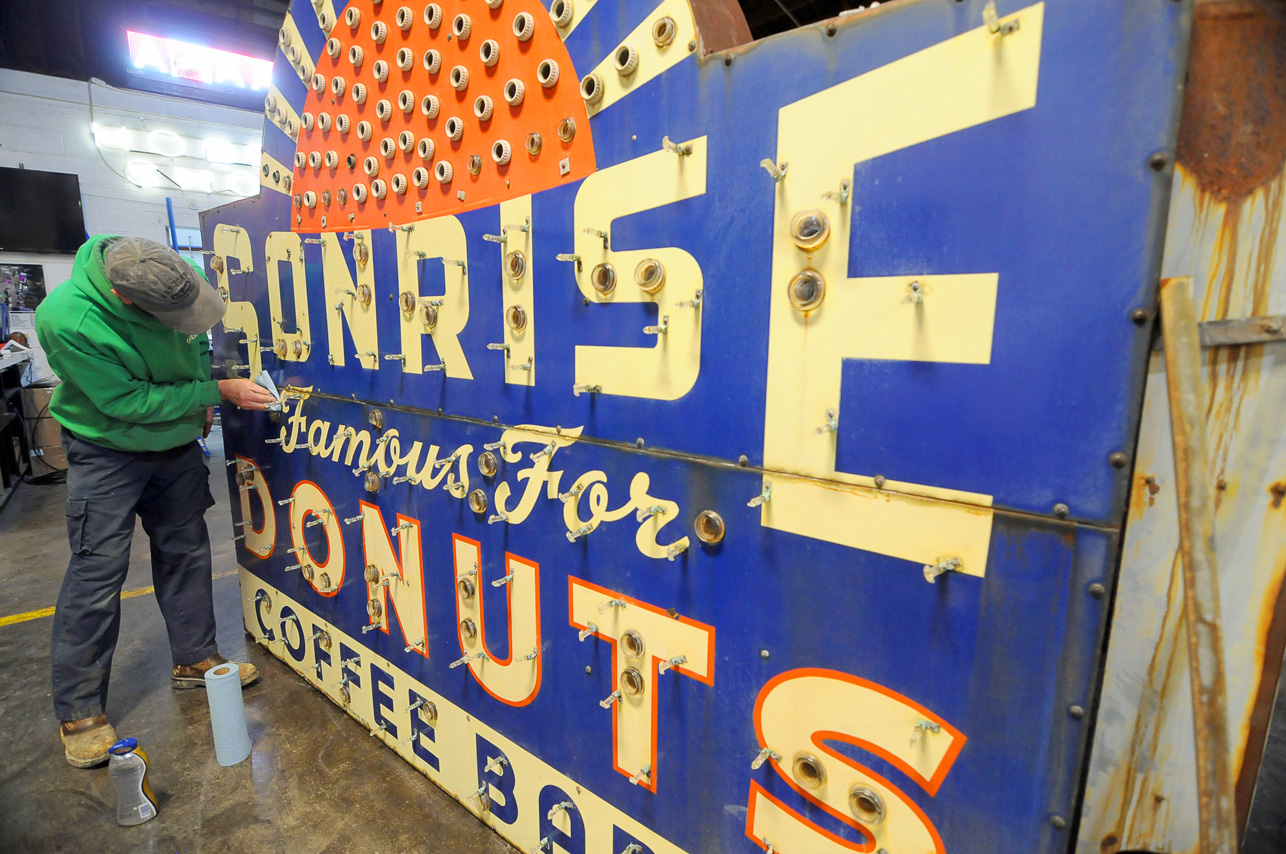 Greg Womack cleans the Sunrise Donuts sign, which was originally located on Route 66. The City of Springfield purchased the sign in December and Ace Sign has agreed to donate the labor to restore one side. Fundraising efforts are underway for the other half of the project.
Photo by David Blanchette

Ace Sign Co. was founded in 1940 by Franklin G. “Frank” Horn and his wife, Alvina, who began painting signs in the basement of their Spring Street home. They soon graduated to a pickup truck and a modest store front, and today their great-grandchildren are helping to run the company from the firm’s large South First Street location.
Ace Sign Co. employs 65 people who do everything from hand lettering to digital printing, neon to LEDs, and billboards to full motion video boards. They have built a large, loyal local and national client base and even do some international work.
Joe Bringuet’s career highlight came when Ace created and helped to install the 10-foot-tall Super Bowl XLVIII letters for New York City’s Times Square in 2013, a job which had to be kept secret until after the letters were in place. But Super Bowl aside, the family business had humble beginnings.
Joe Bringuet started working for Ace in 1950 and married the Horns’ daughter, Louise. He remembers Frank talking about the early days when the business was located in the Horn home, and when the Horns had their front room carpet replaced, “there were red stripes all underneath it where he had sprayed red in the basement and it had come up through the floor boards,” Joe Bringuet said.
“Everything was done by hand in the early days of the company. We dug post holes using hand diggers, and today they have powered augers. There was nothing printed, everything we did was hand-lettered and in a rush,” Joe Bringuet said. “In 1950, there still was a scarcity of building materials because of World War II, so we had to use a lot of masonite, plywood and stuff like that.”
In the early days at Ace Sign Co., no sign was made that was taller than a person on a stepladder could reach. As the company earned more money they bought taller ladders, then they earned more money and bought their first crane truck, Joe Bringuet said.
Ten years after he started, Joe Bringuet took over the operation of the company after Frank Horn had a heart attack. The firm moved to a Fourth Street location and had just eight employees at the time, but their roster of workers soon grew with the addition of Joe and Louise’s daughter and son.
“JoEllen and Dennis were both raised in a crib at the sign shop,” Joe Bringuet said. “They watched everything and knew what was going on, and pretty soon when they got big enough we gave them little chores to do in the shop. “
JoEllen and Dennis also raised their own children in the sign shop, and recently, have watched their grandchildren grow up there.
“My first day was when I was four years old. We were working at night, and my dad, mom and grandmother were screen printing Myers Brothers shopping bags,” said Joe’s daughter, JoEllen Higgins. “My grandfather was painting a turkey sign on the side of a food delivery truck, so when he got done I went over and picked up the paintbrush and repainted it for him. He didn’t say anything, but I was the first granddaughter and I couldn’t do any wrong.”
Higgins is the vice president of Ace Sign Co. and is in charge of accounts receivable. She started working there full time in 1978 and has seen the industry change substantially during her 41 years with the company. 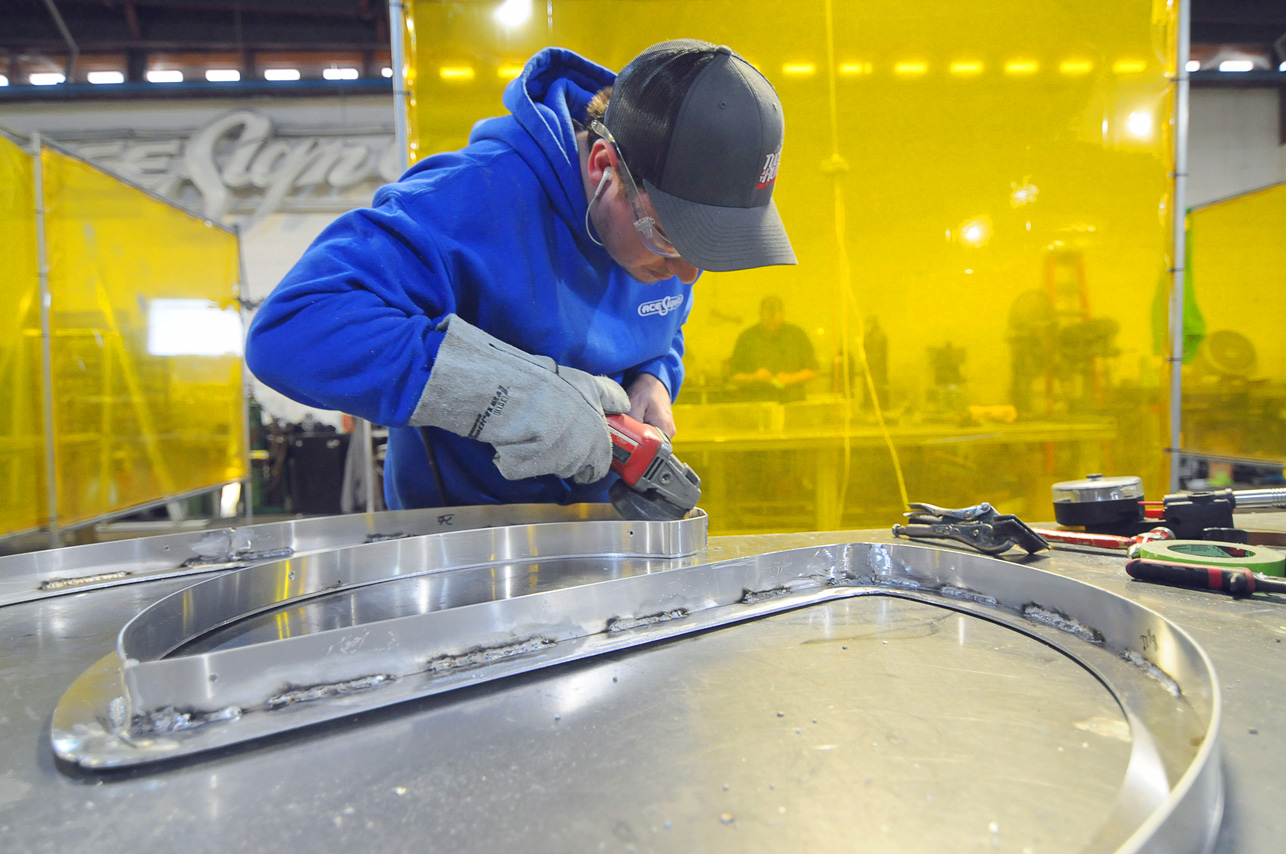 “I started about when we got our first vinyl machine, which helped us create vinyl lettering, and it was the first step in phasing out hand painting,” Higgins said. “We did all of the bookkeeping with real books and ledgers. Now, we just put it on the computer and closing out our year-end is very easy, where it used to take months.”
Higgins raised her children and four of her grandchildren at Ace Sign Co. Her brother Dennis Bringuet, the company president, started his employment 51 years ago and has also raised his children and grandchildren in the shop.
“We had a split shift that I worked in high school, and I was primarily a sign painter,” Dennis Bringuet said. “I learned the craft of painting signs from my grandfather, my father and my uncle, and I still do it a little bit.”
One of Dennis Bringuet’s most memorable jobs was the 40-foot-tall Abraham Lincoln sign on the side of the CWLP power plant. The huge tourism promotion sign is 140 feet above the ground and Dennis and his fellow workers installed it over a seven-day period. He is pleased that approximately 60% of Ace’s business comes from local and area clients.
Cory Boatman is Higgins’ son and is in charge of Ace’s project management and support. He joined the family business in 1995 and learned the trade through hands-on field work and sign installation.
“Shortly after I started we bought one of the first two-man installation trucks, serial number one, which is still in operation here,” Boatman said. “We picked it up from the manufacturer at a sign convention and the attendees thought we were crazy for wanting a truck like that. But two-man trucks like that ended up changing the industry.”
Boatman noted that in his tenure at the business, LED technology has nearly ended the everyday use of neon for illuminating letters and custom-shaped building signs. There have been many other changes, but Boatman said one thing remains constant.
“We thank the community for continuing to work with us and embrace us and to drive us to do really cool things,” Boatman said.
Vice president Todd Bringuet is Dennis’ son and began working full-time at Ace in 2001 while he was still in high school.
“I started shadowing designers and different people within the company, probably being a bit of a nuisance to them,” Todd Bringuet said. “I really appreciated learning a lot from many people over the years, and now getting an opportunity to turn that around and make that a part of the company’s growth.”
Todd Bringuet said digital printing technology, three-dimensional printing on things like Braille signs, and other new developments keep the Ace team constantly on its toes.
“One of the things we do better than anybody is create signs that inspire people, and it takes a heck of a team to do that,” Todd Bringuet said. “We take the time and patience to learn about our clients and to create more than a sign on a stick, to create a real piece of inspirational signage that as soon as somebody sees it, they know what that company is all about.” 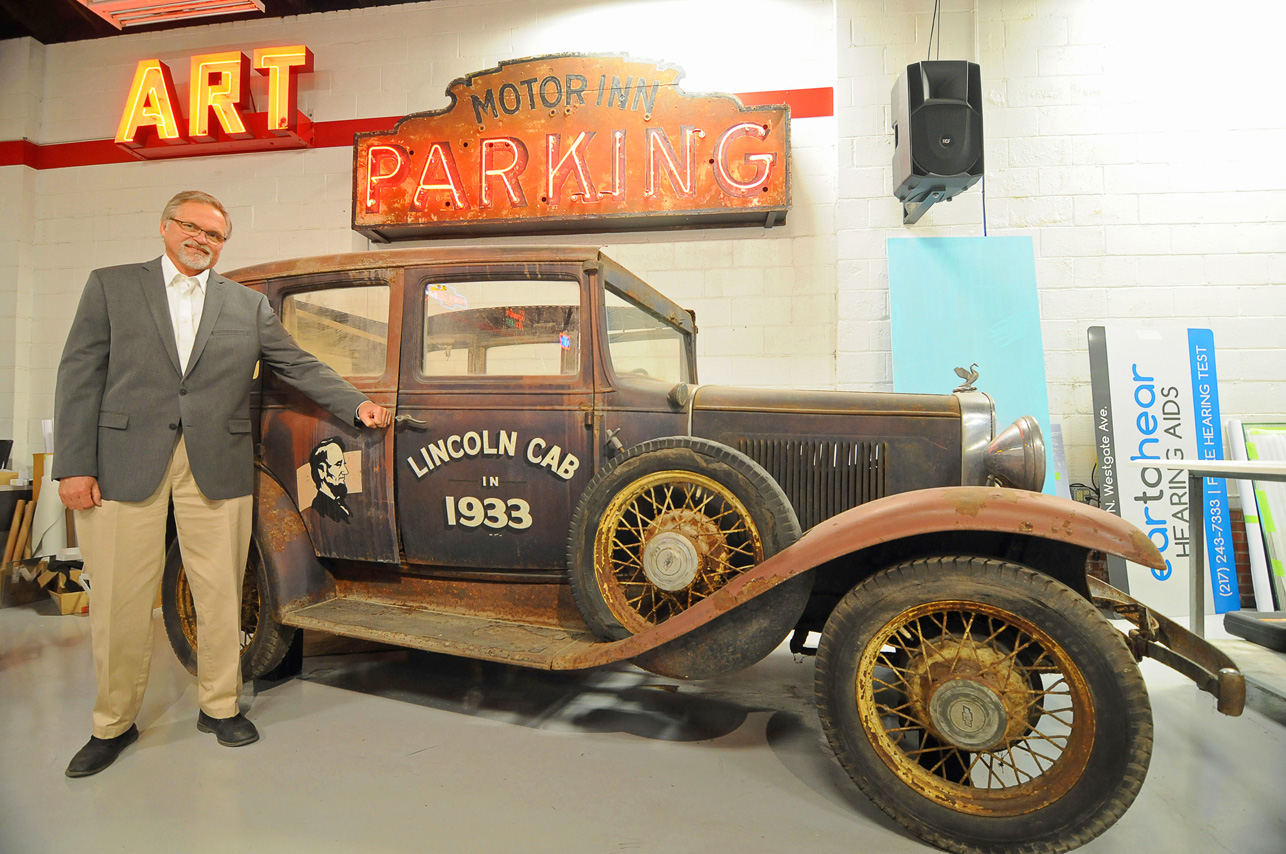 Scott Bringuet is Todd’s younger brother. He serves as sales and design team manager and started with the firm in 2009. One project in particular sticks out in his mind.
“Denney Jewelers asked if we could incorporate a diamond into a sign, and we said, ‘Well, what if the sign was a diamond?’” Scott Bringuet said. “We tried to get in the Guinness Book of World Records for the world’s largest diamond, but I think they are still working on that.”
“We also just did a project in West Virginia that incorporated 1,000 LED bulbs, and each one has its own computer chip,” Scott Bringuet said. “But I’m managing the same team that also deals with the mom-and-pop shop that’s just opening a small business.”
The newest member of the Ace Sign Co. team is Mitzie Bringuet, who married vice president Todd Bringuet and welcomes clients to the business. The three-year experience with the business has been an eye-opener for her. 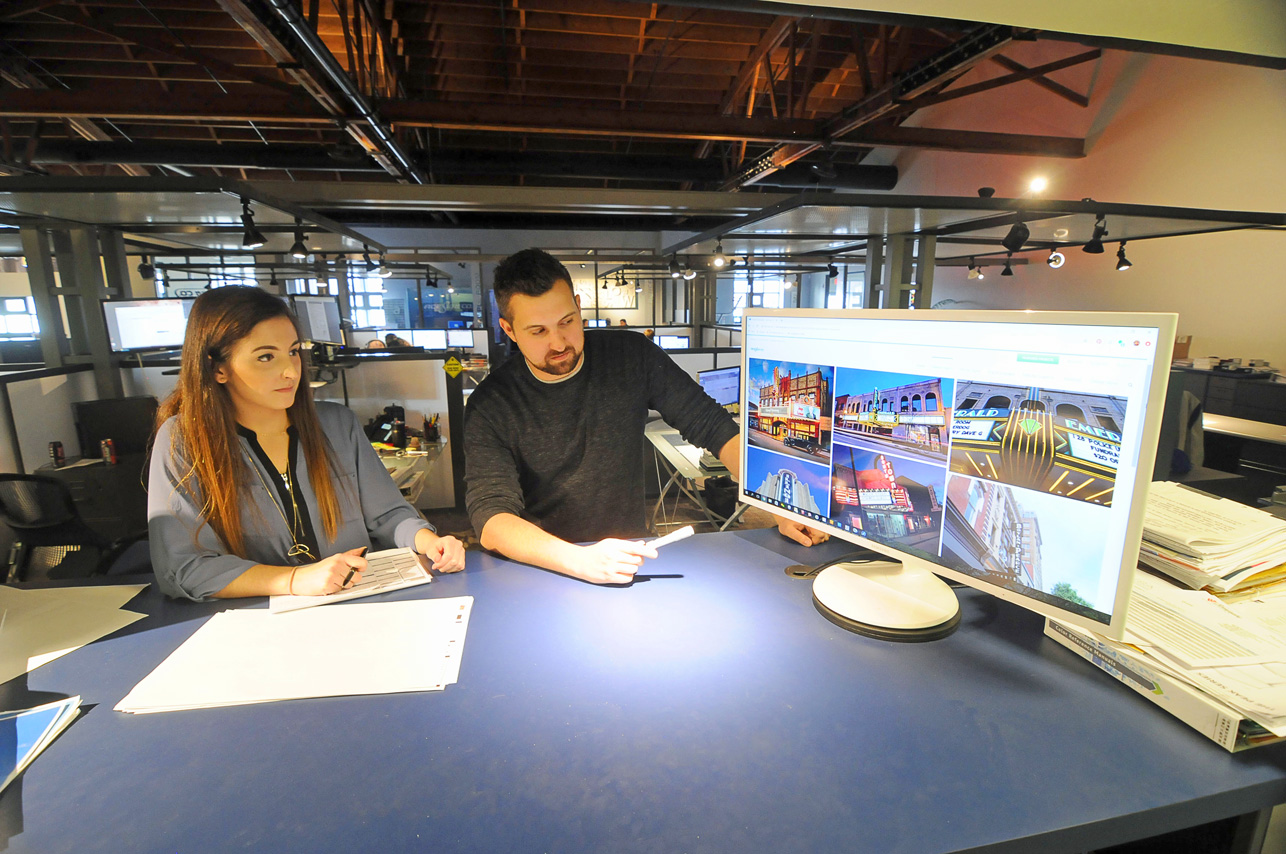 “You don’t realize how much goes into making these little signs and how many people touch it before it’s actually done,” Mitzie Bringuet said. “The biggest experience I’ve had is going to Nashville and seeing them install the sign up on one of the buildings using a helicopter. That was a project that everyone worked on.”
A tour of the 50,000-square-foot Ace Sign Co. facility on Springfield’s south side is a visual feast of old and new signs the firm has made, plus the materials and machines that are used in modern sign-making. The complex features paint spray booths and mixing stations, welding equipment, stations to make various forms of lighting, sheet metal fabrication, printers from small to room-size, laminating equipment and a fleet of 15 installation and service trucks with more than 150 feet of reach.
The Ace Sign Co. Sign Museum features a collection of nearly 90 (and growing) historic signs from Springfield and Route 66, everything from hand-painted wood to brightly lit neon. The featured signs include iconic Pepsi-Cola and Coca-Cola signs; the “Sputnik” from the Belaire Motel; a Barker-Goldman-Lubin building materials sign; a yellow stop sign from the 1930s-1940s with “cat-eye” reflectors; City of Springfield tourist welcome signs; a Paul Powell, Illinois Secretary of State Drivers License Examining Station sign; the Steak N Shake carhop from the restaurant’s original Eighth and South Grand location; a Goodyear Tire gold winged foot; a Sherwin-Williams Paints “Cover the Earth” sign; the original sign from The Barrel Head and several Reisch Beer signs.
The museum is free of charge and open to the public from 8 a.m.-4:30 p.m., Monday through Friday. Ace Sign also hosts a variety of nonprofit fundraisers and community events in the space.