Students at South Town Construction Training Center are in week six of the 12-week program, and have just received their OSHA cards, a necessary step to working in the electrical trade.
The students who are part of the current class have left their mark on the training center, with a wall they’ve painted and designed to be used for wiring during future classes.
Calvin Pitts, South Town Construction Training Center founder, said each graduating class that passes through South Town adds something to the training center. “Who do you think we should put on the wall?” Pitts asked his students when they were making minor adjustments to their contribution during a Feb. 16 class. “Bob Marley,” said student Daria Johnson. “He built a bunch of houses in Jamaica.” 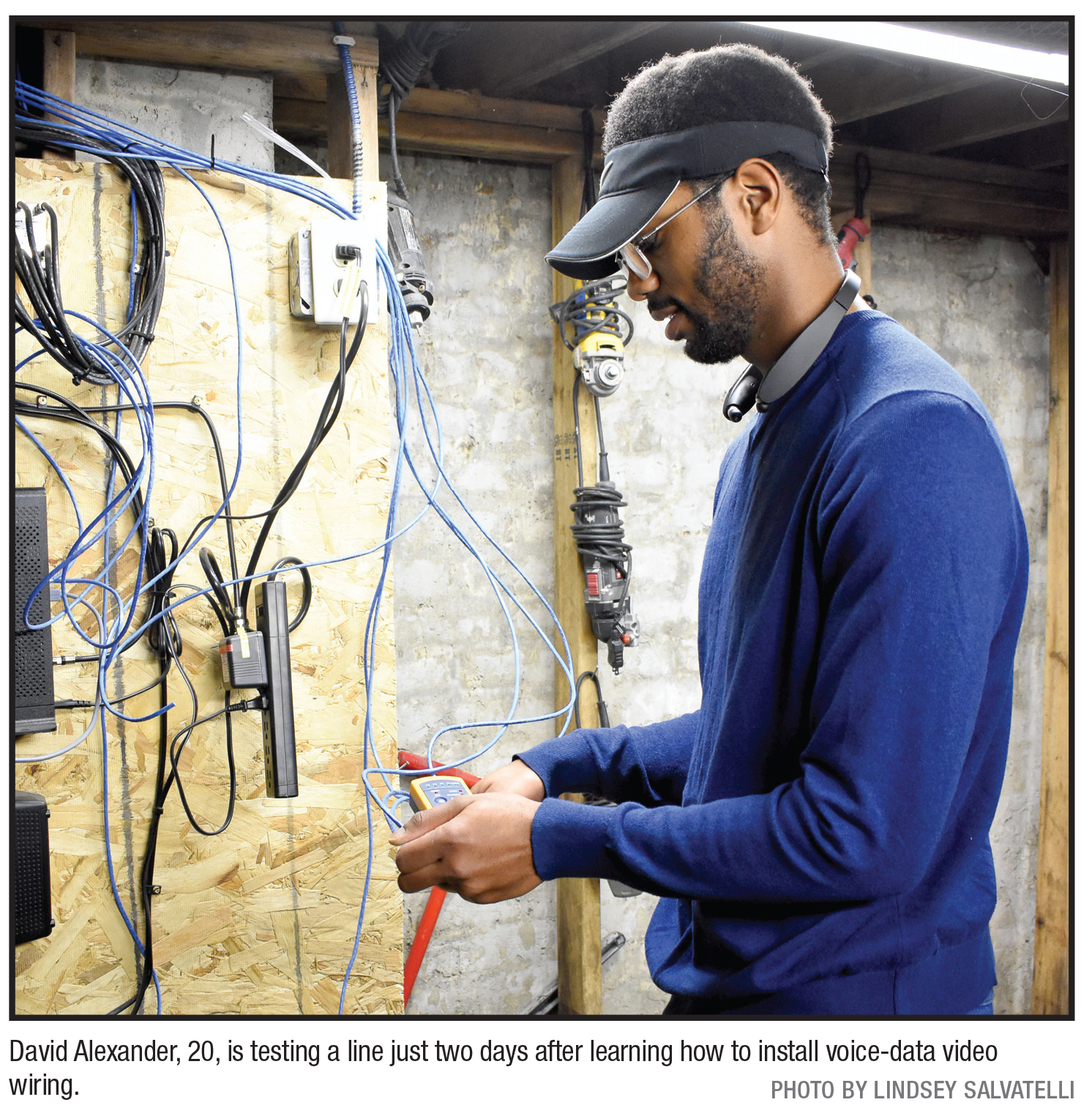 South Town students Dan Myers, Nakesha Stephens and J’Quarius Renicks described their progress as “accomplished.” Their summation provoked a smile from Pitts.
Pitts is always looking for new skills to introduce to his students, and on the day most of the class was taking an exam to receive their OSHA card, Pitts gave student David Alexander a unique opportunity to learn something new. Alexander, having taken similar courses in the past, already has his OSHA card, so Pitts used the time to introduce Alexander to voice-data video wiring.
“I didn’t know there were that many aspects to electrical work,” Alexander said. He was given 20 minutes to wire an Ethernet cable, a task Alexander gladly accepted.
Despite Alexander having some background in the trade before signing up at South Town Construction, he said he’s learned more in the past six weeks than what he anticipated. He said he’s begun to notice things that are related to the construction trade whenever he goes out. More importantly, he’s beginning to notice the flaws in jobs he sees.
“I want people to say, ‘David Alexander is the best electrician around. He’s fast and efficient, and you never need to call him back because it’s done right the first time,’” Alexander said.
What’s even more encouraging to Alexander is seeing his fellow classmates spend their free time at South Town Construction, practicing what they’ve learned in the past six weeks.
“The project South Town is undertaking is to help train a pipeline of folks who can fill energy efficiency or related jobs in our service area,” said Kristol Simms, director of energy efficiency for Ameren Illinois.
Simms said Ameren Illinois wanted to contribute to the community in a few ways, but quickly realized there were some obstacles. Attempts to update a home’s wiring to make it more energy efficient often stall due to the presence of knob-and-tube wiring, an outdated form of electrical wiring that hasn’t been used in nearly 80 years. Very few contractors are willing or able to replace knob-and-tube wiring.
“We definitely have goals for a reduction of energy, and those goals are aggressive,” Simms said. “We as a company decided that it’s as important that we can make these reductions in a way that has a positive [targeted impact] on our communities.”
Simms said Ameren Illinois’ goal through community-based programs like Pitts’ training center is to help fill jobs that lack qualified laborers, but to also give back to help expand nonprofits like South Town Construction.
South Town Construction Training Center came into existence in 2017, but Pitts has been teaching job training programs since 2013.
“We’re creating human capital,” Pitts said to his students. “Look that up if you don’t know what it means.”

Lindsey Salvatelli is an editorial intern with Illinois Times as part of the Public Affairs Reporting master’s degree program at University of Illinois Springfield. Contact her at intern@illinoistimes.com.