A major redevelopment project may be occurring soon on MacArthur Boulevard in Springfield, one that Ward 7 Alderman Joe McMenamin says would be along the lines of the HyVee and MacArthur Park Apartments projects in terms of investment and impact. “I think this would be in the top five redevelopment efforts I’ve seen so far during my time on the council,” McMenamin said. 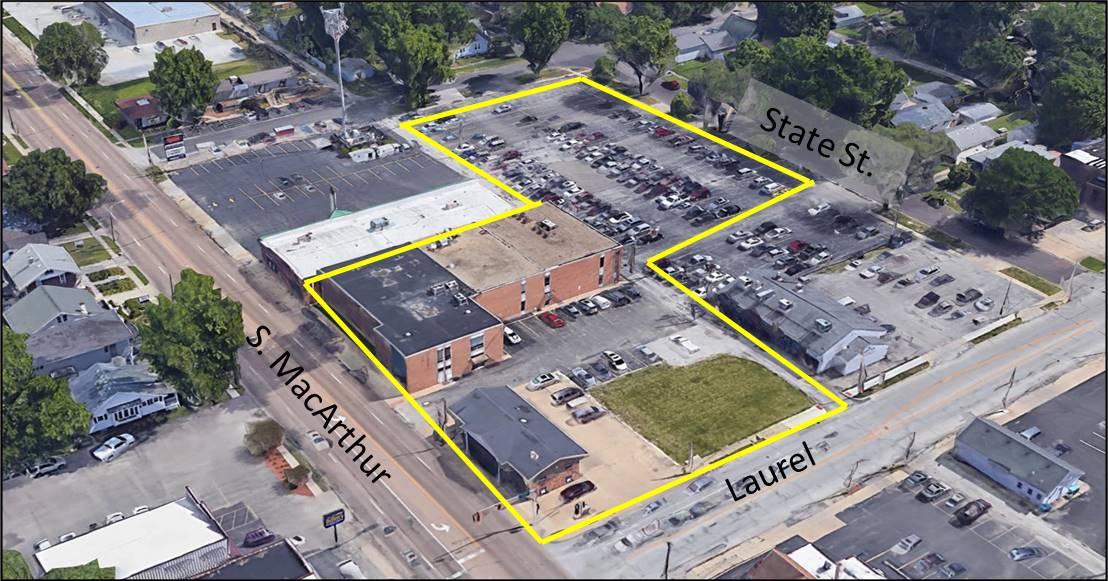 The property under contract, which includes the former Federated Funeral Home building and a now-vacant law office.

CEHOG, LLC, an entity controlled by the Hoogland family, has a contract to purchase more than one-and-a-half acres of land at the corner of MacArthur Boulevard and Laurel Street. Curtis Tillett, a broker with The Real Estate Group, originally listed the property for sale at $750,000 in September 2017. The parcel includes a building formerly occupied by the Federated Funeral Directors as well as a vacant law office and a large parking lot along State Street.

The proposed project calls for demolishing the two vacant buildings and possibly the building that currently houses Family Video, which is also owned by the Hoogland family. While the intention is for commercial development, a large open space would remain on the eastern section of the block to serve as a buffer between the new development and the existing residential homes on State Street.

“The proposed open space is very positive,” said McMenamin. “We want to make sure that space along State Street either remains open or becomes appropriate residential property.”

The buyer has filed a zoning petition seeking to make the entire property S-2 zoning, which McMenamin said makes sense, in his opinion. “Zoning along MacArthur is really a hodgepodge, and there is some residual residential zoning.”

McMenamin said so far, the idea has been well-received. “The feedback has all been positive, mostly because Eric Hoogland’s plan involves knocking down three buildings that are beyond their useful lives.” McMenamin also said he likes the idea of getting rid of the buildings that sit along the edge of MacArthur so that it would be easier to accommodate plans to widen the road in the future.

Board members of the MacArthur Boulevard Association met today to discuss the project and president Michael Higgins said, “At this point, we’re going to support the zoning request, but beautification is the key word. We’re hoping for something that will be good for MacArthur Boulevard in terms of aesthetics.”

Higgins said that Hoogland has three different concepts, but the plans are not firm at this point and could change, depending on the tenants who express interest. “We want something that will set a standard for any other new developer coming in. That’s our whole thing; we want it to be an example for the neighborhood.”

Gordon Gates, an attorney with Gates, Wise, Schlosser & Goebel who is representing Hoogland in the transaction, said he doesn’t anticipate any issues with the zoning request or proposed project. “It will remove two eyesores; I think it’s a smart move for everybody. Those buildings are useless where they are and what they are currently. He’s got a bunch of ideas, all of which I think will be favorably received by the public.”

The zoning request is scheduled to be heard by the Planning and Zoning Commission on Feb. 20.