Try something new at Nu-Voh

Try something new at Nu-Voh

Although I love a good steak, I get particularly animated over more esoteric dishes like steak tartare or roasted bone marrow.  It’s the kind of food that gets me excited, but not the type of fare usually seen in the capital city. So I was excited when I first saw Nu-Voh’s food-forward menu a month or so ago.

Nu-Voh is located on the ground floor of the Saint Nicholas Hotel. The space has been vacant since Caitie Girl’s closed in 2011 after the tragic death of its owner, so it’s nice to see some life breathed back into this beautiful space.

The mosaic floor, the vaulted ceilings, dark colors and repurposed tables give off some good vibes.  You really can feel some of the splendor of Springfield’s past.  Nu-Voh bills itself as casual fine dining.  I’m not so sure about casual – someone wearing a baseball hat would look out of place here.  Although to hear my wife, baseball hats are never appropriate at the table.  But Nu-Voh certainly isn’t stuffy and formal. It’s a good balance, and they’ve taken maximum advantage of the beautiful space. 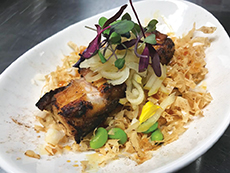 We preferred the seating against the windows (always nice to be seen), but there are plenty of other options, including a separate private room that’s presumably available for events.

Nu-Voh is only open for dinner.  So when we visited, the spacious bar looked like the place to be – there wasn’t a seat available. You can dine at the bar, too.  We visited on a Monday night, which certainly is not the most popular night for dining out. We were pleasantly surprised to see that there was a steady stream of customers during our visit.

Service was excellent from the start.  The staff was efficient and attentive, but not overbearing.  It takes some skill to know when to leave diners alone and when they need some attention, and our server certainly had that down.  He also knew the menu and had obviously sampled most, if not all, of the dishes.

As you would expect from a steakhouse, Nu-Voh has a nice wine and specialty cocktail list that covers pretty much the whole spectrum of price and genre. However,  it was the menu itself that piqued my curiosity about Nu-Voh, given that I so rarely see dishes like tartare and marrow on menus anymore.  Blissfully, one of my guests has similar appetites and was happy to order these two items right off the bat.

The tartare came out first.  It had the requisite elements – some greens, some acid, amazing bread to serve as a delivery vehicle, a raw quail egg and a creamy sauce to pull it all together.  I thought that the meat could have been chopped a little finer – larger chunks of raw meat aren’t for everyone.  And, although we weren’t sure, we thought that the meat might have been “cooked” by some acid, as with ceviche.  It wasn’t bad, it was just different.  And different can be good – we did scoop it all up, after all.

Although I hate to write this, the roasted bone marrow disappointed both of us. The bread was among the best I’ve had in Springfield. But I was expecting an unctuous rich and fatty delicacy that was buttery, creamy and packed with umami.  Nu-Voh’s had the umami but was missing that fatty (but not greasy) texture and taste.  I’m hoping that it was just an off night.

Three of us decided to also get side salads, opting for the Caesar. We all agreed that the dressing was spot on.  Two of us loved the bacon (copious amounts of bacon!) while one thought it needed to have a bit more fat rendered out.  That aside, make sure that you give it a try. 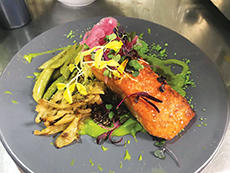 The gnocchi had wonderfully roasted cloves of garlic and just the right combination of cream sauce, peas and cherry tomatoes.  And the gnocchi themselves were fluffy and light pillows of flavor, not dense or soggy as so often seems to be the case.  Good job, Nu-Voh.

I was a bit surprised by the pork chop, but in retrospect, I should have ordered the 16 ounce version. It looked sort of lonely on the plate. Other than perhaps benefiting from a bit more char, it pleased the palate.

My two other guests know good beef.  They reported being pleased with their beef dishes, both of which came out as ordered.  Each came with a demi-glace sauce.  And, we all agreed that the asparagus and garlic mashed potatoes were a nice accompaniment to our meals.

Most surprisingly of all, however, was the consensus that the Brussels sprouts were addictively good, with ample amounts of parmesan dusted about.

Regrettably, we didn’t try the Chinese five-spiced duck breast ($29).  It came under glass, surrounded by cinnamon smoke.  The odor from the tables near us was enough incentive to come back.  It looked delicious and was obviously a fan favorite.

Unbelievably, we had room for dessert, opting for the bananas foster and the chocolate cake.  I’m not a dessert guy, nor a fan of bananas foster, but I’d definitely order this dish again.

This type of decadent meal probably isn’t something you want to do every week.  But Nu-Voh is worth a visit when you’re in the mood for something different.  We hope it finds long-lasting success.

Thomas Pavlik is an attorney at Delano Law Offices, LLC. Contact him at tpavlik@delanolaw.com.