I’ve been hearing about Papo’s Café for the last several months, but primarily in connection with its made-from-scratch breakfasts, baked goods and hand-crafted coffee drinks. And yes, Papo’s breakfast menu sure is enticing. Although plenty of business is done over breakfast meetings, this month the fates decreed a lunch meeting with a west-side client at Papo’s. We visited on a dreary and cold day looking forward to some nourishment and to catching up with a longtime client – and found Papo’s conducive to both. 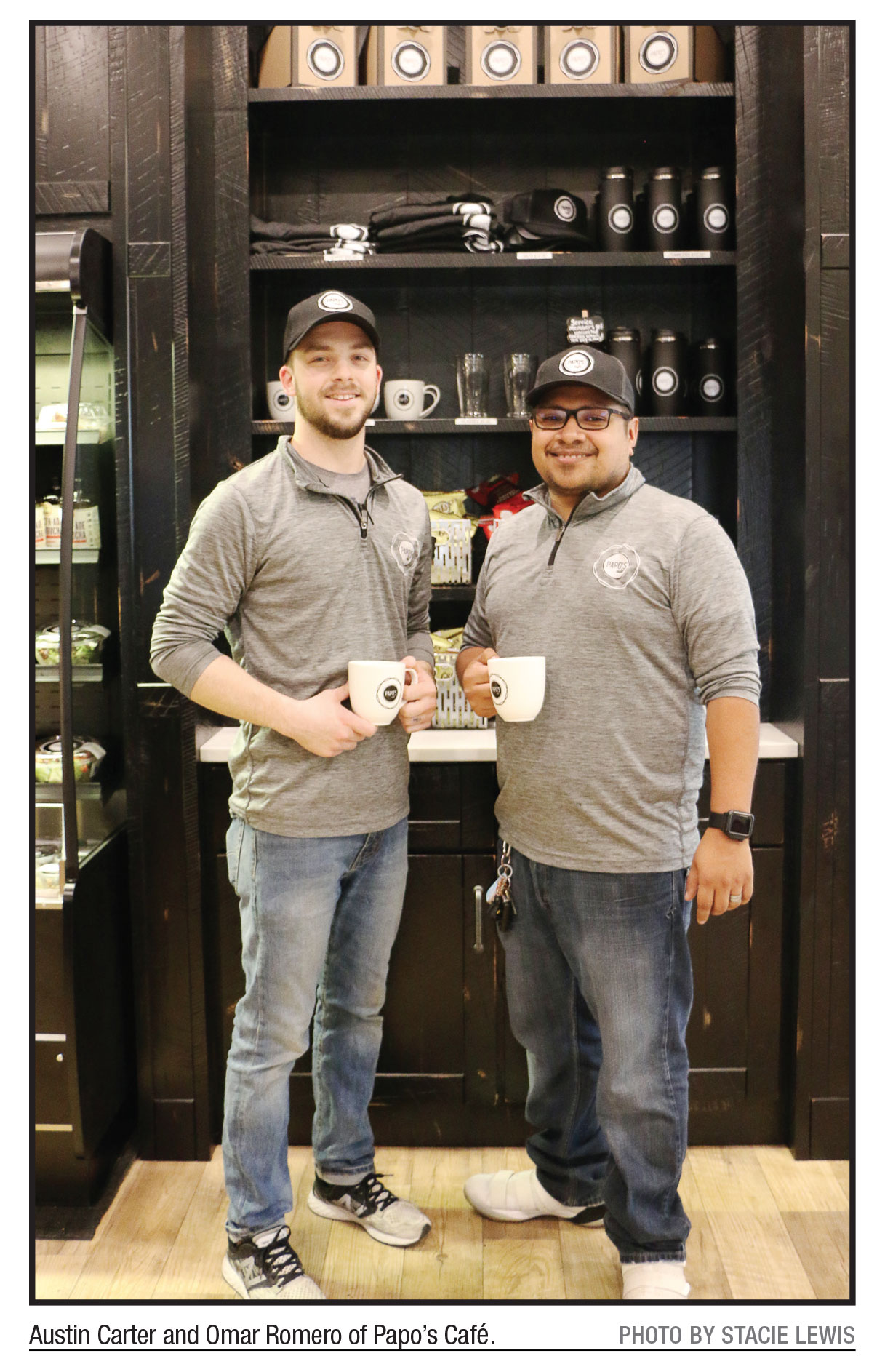 Papo’s is located in a strip mall, and we weren’t quite sure what to expect. In terms of décor and layout, think farmhouse meets coffee bar. There’s a large gathering room just off the entrance with a communal table, a nice sitting area with comfortable lounge chairs – complete with a small fireplace and a TV – and some smaller tables. The main dining area continues the farmhouse feel with barn wood-style partitions, distressed wood furniture and metal chairs that harken back to pre-industrial revolution farm implements. The light from several walls of windows helps keep the place from being cloyingly dark. All told, it works, and you quickly forget you’re in a strip mall.
One thing I don’t like for a business lunch is ordering from a counter. Somehow, it’s always awkward. But Papo’s does a nice job of ameliorating the issues – staff is knowledgeable, speedy and helpful and bottlenecks are avoided thanks to smart placement of the menus. As we were in line, we noticed that Papo’s has a cooler filled with ready-to-go items for those looking to carry out or to get in and out quickly. Everything looked fresh and appetizing.
Papo’s describes itself as “made-from-scratch meets local and quick service.” When I hear made-from-scratch and see a large menu, I usually discount the claim. Which is why I was happy to see that Papo’s doesn’t overextend itself and instead keeps a tight and focused lunch (and, for that matter, breakfast) menu.
Papo’s has a handful of signature dishes that are rounded out by sandwiches, soups and salad. All items can be made into a meal for an extra $2.50 – which includes one side and tea or canned soda, made in-house. Available sides include Cheeto crunch mac and cheese or pasta salad. 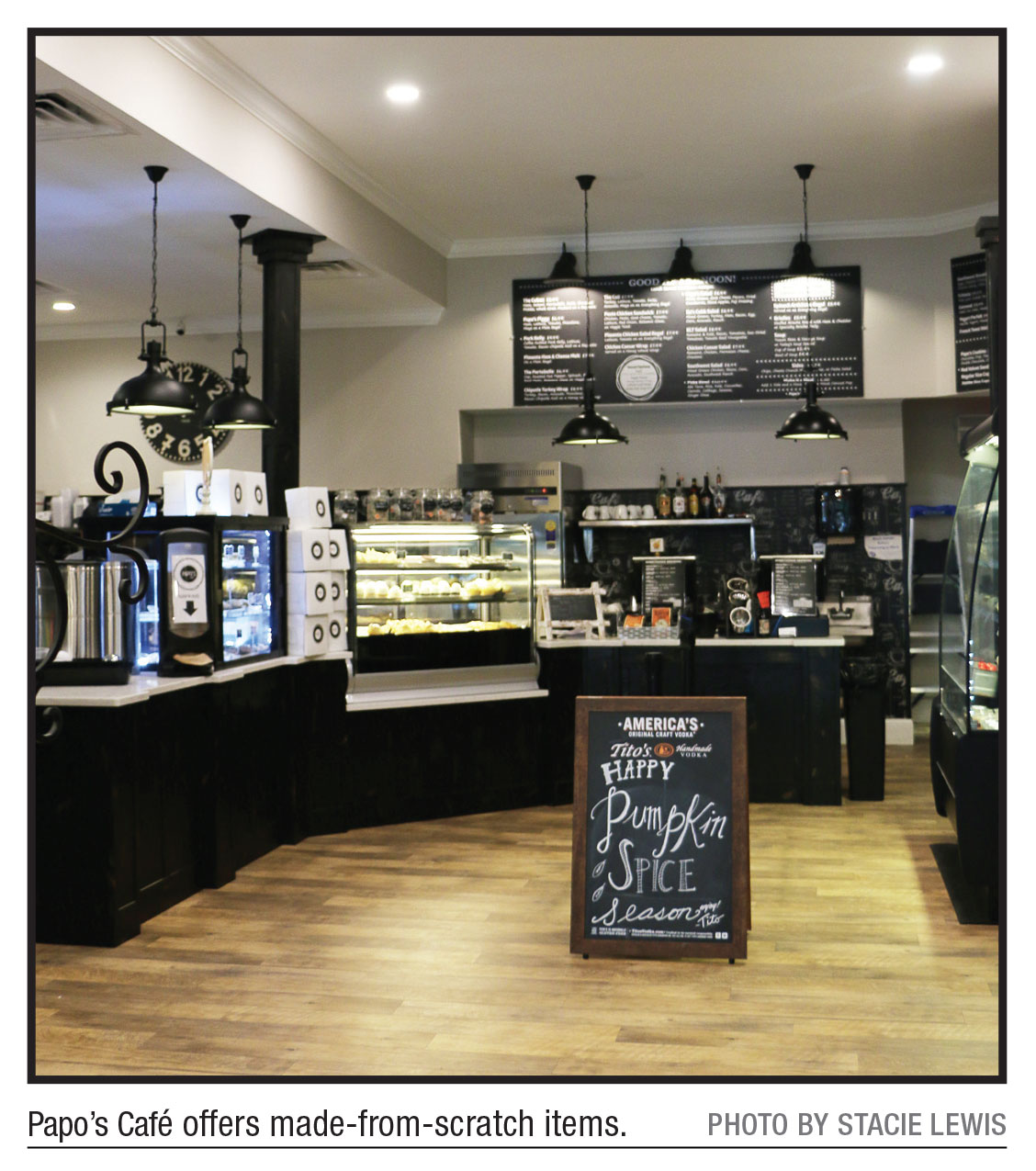 Being only three for lunch we couldn’t sample the whole menu, and it was with some regret that we opted to pass on the pork belly sandwich (coffee-rubbed pork belly, lettuce, tomato and bacon-chipotle aioli on a baguette – $9.99), the pimento ham and cheese melt served on a plain bagel ($7.99) and the briolles (stuffed brochte bread with him and cheddar – $3.99).
Instead, we went with the poke bowl (ahi tuna, rice, kale, cucumber, carrots, cabbage, sesame with a ginger glaze – $10.99), the Papo’s salad (mixed greens, goat cheese, pecans, dried cranberries, sliced apples and Fuji dressing – $8.99) and the chipotle turkey wrap (turkey, bacon, avocado, provolone, bacon-chipotle aioli served on a honey wheat wrap – $8.99). Because it was a cold day, we also threw in Papo’s soup of the day (tortilla soup – $2.99 cup and $4.49 bowl) and the Cheeto crunch mac and cheese ($1.79).
Our food came out quickly. And, surprisingly, it all came out at the same time, which allowed us to avoid the “go ahead while it’s hot” dance when dishes come one at a time. Nicely done, Papo’s.
I’m a bit of a tortilla soup snob, and found this iteration to have a depth of flavor that I wasn’t expecting. A bit more chicken and some crunchy tortilla chips as a garnish would have been nice, but certainly weren’t necessary. 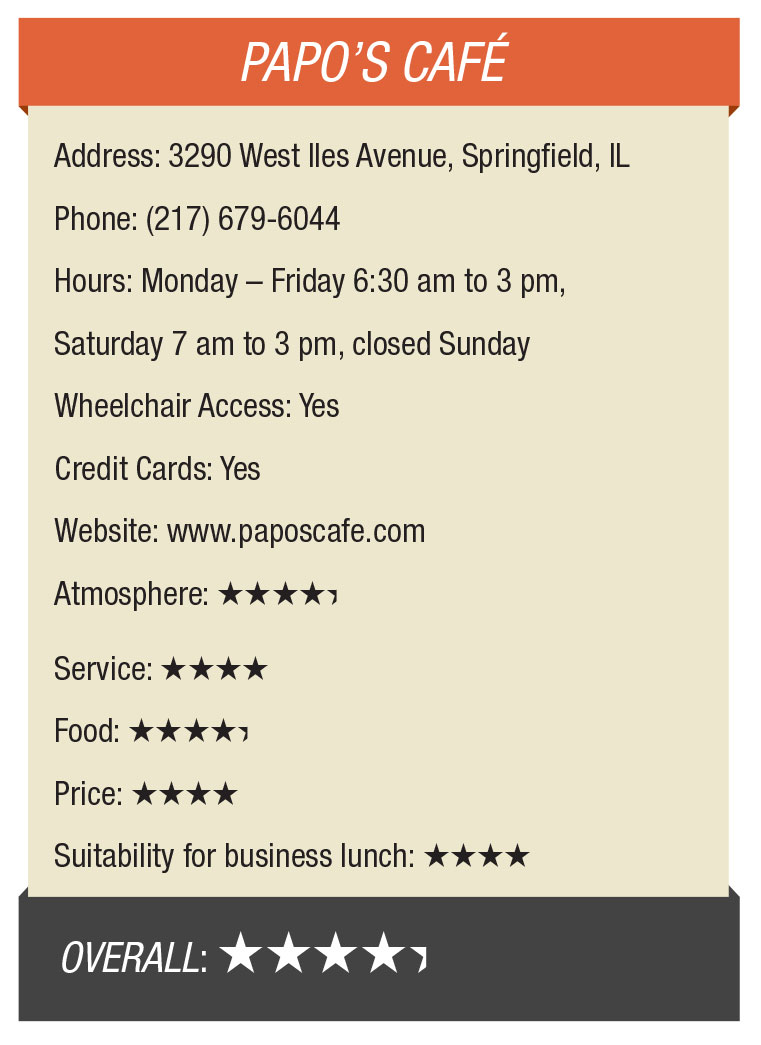 The mac and cheese was a true treat – the crushed up Cheetos added some brilliant orange color and texture, which served to elevate the dish. What a good idea, as was the copious amount of gooey cheese.
I found the wrap to be a bit sweet to my taste (I hadn’t noticed that it came on a honey wheat wrap – my bad), but everything else was spot on. The bacon-chipotle aioli, which I ordered on the side, was a real winner that helped balance the dish out. As with all of Papo’s offerings, the dish was generously sized.
The Papo’s salad was reported as on the higher end of the spectrum – the goat cheese pairing well with the cranberries and light, but flavorful, dressing. My guest found the acidity of the apples to be a nice touch.
But I think the best dish of the day was the Poke bowl – one of Papo’s signature dishes. It’s not often that you find a dish that screams health-conscious, but that also delivers with bold and balanced flavors. Thankfully, my guest allowed me a few bites, and I now know what I’ll order on my next visit to Papo’s. Don’t miss this one.
We couldn’t help but notice the delicious-looking baked goods put out by the kitchen, and actually grabbed a scone ($2.79) to take home. Although not consumed until the next morning, it was simply reported as delicious.
Papo’s has some good stuff going on, and we all decided we’d be back.