Much of what is recognizable in Springfield has a connection to FWAI Architects Inc., but it’s something else that gives the firm’s founder the greatest sense of pride.

“Hiring good staff. We’ve fortunately always had good staff,” said Carl Fischer, who founded the firm with his wife, Kay, in 1976. “We’ve also had tremendous mentors who helped us, like Frank Mason and A.D. Van Meter. Frank was really the biggest one, and for some reason took a liking to us. He did some wonderful things for us and introduced us to a lot of people.”

FWAI has come a long way from its beginnings 43 years ago in the Fischers’ Walnut Street home. The firm was known as Carl Fischer Associates until August Wisnosky joined the business in 1982, and it became Fischer-Wisnosky Architects, Inc. Wisnosky has since retired; Fischer is semi-retired but still involved, and the name changed to FWAI Architects Inc. in 1996 to make a smoother transition for the next generation of ownership.

“We were fortunate enough early on that we got a little contract with Blue Cross-Blue Shield for some work here in Springfield,” Fischer said. “We got along well with them, and they liked what we did. In the early years, they were one of our biggest growth areas.”

Fischer said that FWAI has now worked on major Blue Cross-Blue Shield buildings in Texas, Oklahoma, Montana, New Mexico and Illinois; 250,000-square-foot data centers in Fort Worth and Chicago; and the majority of the insurance company’s call centers, which accommodate between 500 and 600 people per building.

FWAI has also been involved with much smaller, but still significant projects. Fischer is particularly fond of the work they did on Ronald Reagan’s boyhood home in Dixon, Illinois, where he got to spend time with the former president.

“We heard a lot of fun stories about the Reagan family which will forever remain secret,” Fischer said. “Ronald Reagan was great, almost like a friend. Nancy didn’t say much. And his brother, Neil, was a character. It was a pleasure to sit down with President Reagan and Neil and get out of them what that house really was.”

“Every time I go up to Reagan’s home, I’m always proud that we did it,” Fischer said. “But the pride isn’t necessarily in the building, it’s in the experience to get to the building.” 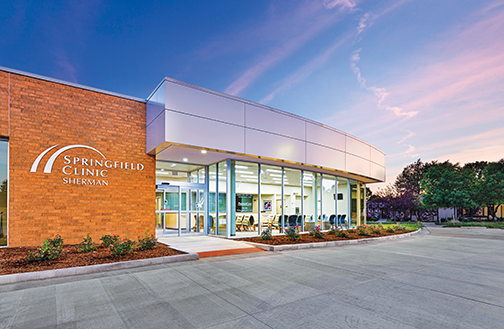 FWAI also performed a lot of the research and prepared the “as built” drawings for the restoration of the Dana-Thomas House State Historic Site in Springfield, a national architectural treasure designed by a man who Fischer met while in college.

“Frank Lloyd Wright was an egotistical little bastard, and he always wore that goofy cape,” Fischer said. “But he was good for architecture. He said what you believed. He set suburban America behind by about 20 years with his prairie houses, they are beautiful structures.”

The thought that went into some of the details was beautiful, but some of them didn’t quite work. Wright was famous for saying ‘every house I do leaks.’ He was right,” Fischer said. “We spent a lot of time correcting one leak down in the basement of the Dana-Thomas House where the billiards room is, the skylight above it in the front patio, that thing leaked forever. But we finally got it to stop leaking.”

Fischer said a lot has changed in the architecture business during the past 40 years. “When we first started, almost everything was done on a handshake. Now, you have to have a set of documents that are ungodly thick,” Fischer said. “The codes have become more dictatorial, some for good reasons, but it kind of cuts into some of the creativity because you can’t do this, you gotta have that.”

Fischer still prefers the old-fashioned way of designing structures and interiors. “The thing that’s nice about designing on the board is you can step back and look at what you’ve drawn, see the whole big picture and make corrections or whatever you need to do at that time,” Fischer said. “Whereas on the computer screen, you are looking at this little part and that little part, and then you put the whole thing on the screen but it’s only as big as the screen. So you have to send it out and get a print. You don’t get that quick overview that tells if you’re heading in the right direction.”

Paul Wheeler is the president of FWAI, and he is also a fan of using the old-fashioned drawing boards for design work. Part of that preference comes from working side-by-side with Fischer and Wisnosky.

“I emptied wastebaskets in 1983 and 1984 for Carl when I was a student, watered plants, ran errands. Back then, we were hand-drafting and things were on the boards, so there were a lot of chores to do,” Wheeler said. “Then in the afternoon, I would spend time with the boards drafting.”

After school, Wheeler worked for bigger architectural firms in St. Louis before returning to FWAI as an architect in 1991.

“Carl, Augie and Kay really taught us humility, being humble with everybody that we work with,” Wheeler said. “Architecture can be an egocentric profession, but we always worked hard to listen and to learn from everybody.”

“Everybody brings things to the table on projects. It takes a large community of people to put a project together,” Wheeler said. “When there is that mutual respect among all the professions – the contractors and the owners, the bankers – when everybody is clicking you put together some really wonderful projects.”

The new Springfield YMCA at Fourth and Carpenter Streets is another FWAI project, and updated design drawings should be ready by late spring. It won’t be significantly different than the initial sketches, but the design will “have matured a bit,” Wheeler said.

“The YMCA is a very key building. It’s linking the Medical District to the downtown center and includes the Enos Park area,” Wheeler said. “We see it as a substantial building that stands the test of time and will be a magnet for all of the forces around it.”

Wheeler said standing the test of time is an important goal of the YMCA design.

“You know just by the way many modern buildings are constructed that they aren’t very civic-minded. You see a lot of buildings that don’t relate to the other parts of the city,” Wheeler said. “Architecture is now about technology, and you see some really interesting building shapes and  building skins that we’re able to do now because of computers. But I had a mentor who said, ‘just because you can build it doesn’t mean that you should.’”

Forrest Hoffman started with FWAI as a draftsman in 2005, mainly working on Blue Cross-Blue Shield projects. He progressed to job captain and then project manager and is now vice president of the firm.

“Blue Cross-Blue Shield has said of us from the beginning that we are good, honest guys and that’s really all it took, to just be honest and good,” Hoffman said. “We didn’t have to go knock on doors, we didn’t have to say all this pretty stuff. We did our job, we did it well, and that worked for them.” 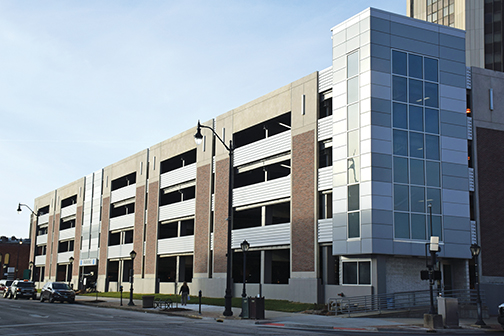 FWAI design elements can be seen on the revamped municipal parking ramp at Seventh and Monroe in Springfield. PHOTO BY David Blanchette

Hoffman’s work impressed Fischer and Wheeler enough that four years ago they asked him to become part of the firm’s ownership.

“I’m proud that Carl and Paul had the confidence in me to do the work,” Hoffman said. “Their trust in me early on was confirmation that I was working hard and wanted to do good work.”

“As long as we have a good team, a good budget and a good client, I’m happy to do whatever it takes,” Hoffman said. “I’m not picky. I’ll do the task or the job at hand, whatever it is.”

Hoffman said FWAI has the unique ability to coordinate all parts of the project to achieve the best possible result.

“When you think of architects, you think about designing stuff, and that’s part of it. But in reality, we are kind of the hub between the client, the contractor and the trades,” Hoffman said. “We are handling all of that coordination to make sure all of these pieces come together. We are there to make sure the project goes smoothly, no matter what.”

“There are a lot more entities involved in projects than there used to be, and we lose a little bit of the big picture with all of the technology,” Hoffman said. “We do our best to slow everything down, look at the big picture and achieve the best possible result on every project.”

The University of Illinois at Springfield (UIS) is a satisfied FWAI client.

Coderko cited FWAI’s leadership and contributions to the construction of the university’s new exercise science and athletic training academics spaces, the modernization of the main floor of the library, and the complete renovation and modernization of the new UIS field station at Lake Springfield as examples.

“FWAI’s work has, and continues, to enrich the lives and learning environment for students, faculty, staff and those who visit the university,” Coderko said.

Results like those achieved at UIS are a major reason why you should hire an architect, according to FWAI founder Fischer.

“If you want to build something other than a cookie-cutter design, then you need to hire an architect to help guide you through it,” Fischer said. “The downside is that it will cost you more money, but it’s an investment in the project you are doing. You want to get as much longevity from it as you can.”

The FWAI business philosophy of hard work and humility will continue as the firm transitions from its founding leadership to those who will chart its future course.

“We are not a very egocentric firm. A lot of shops would close when the leader is done, but Carl has helped us to move into the next generation,” said FWAI president Wheeler. “We hired a bunch of young people this year. We are so blessed with our clients, they are good to us and we work hard for them.”

FWAI has a long-standing reputation in the architectural community. “FWAI is a legacy firm in Springfield. They are a main branch in the local architecture family tree with many area architects working there at one point in their career,” said Mike Waldinger, executive vice president of the American Institute of Architects (AIA) Illinois. “We are lucky to have a number of practices like them in town who are small enough for clients to get their top talent and big enough to work regionally or nationally.”

“We were nextdoor neighbors downtown for many years and regularly ran into Augie and Carl, and then Paul. It was always interesting and impressive to hear about the projects they were working on close by and around the country,” Waldinger said. “Successful, long-standing businesses like theirs are the backbone of the AIA, and their work makes a big impact on their hometowns.”