UIS is seeking U.S. Green Building Council LEED Gold Certification for the new students union’s “living” roof. The 200,000 plants over a sloped membrane provides insulation, helps to lower air temperatures and lasts much longer than other roofs. The project was awarded a 2018 Design Excellence Honor Award from the Prairie Chapter of American Institute of Architects (AIA).

“The goals of the project are noble; to create a central place for what has otherwise been a commuter campus. The building is a striking, inviting sculptural form with sophisticated space and light quality. The view from the entry is inviting, and makes good use of the high ceilings and steel I-beams at the window. The dropped ceiling subtly changes the space and links to an area at the back, creating a graceful transition to a more human scale.” 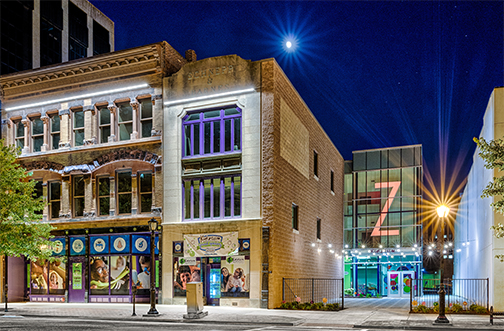 The Kidzeum is a three-story, 25,000 square foot facility located in the historic buildings at 412, 414 and 416 East Adams Street in Springfield’s National Register Historic District. Designed with a focus on fun and learning, Kidzeum is dedicated to teaching children of all abilities about health and science through discovery and play.

Chuck Pell, a Springfield architect whose office is across from the Kidzeum, observed, “The vibe on the 400 block of East Adams Street has noticeably changed in a wonderfully positive direction with the arrival of a destination for kids.  The impact on this microcosm of our city cannot be underestimated as families with kids in tow explore the fun, educational exhibits of the Kidzeum and have a chance to see the urban fabric at the core of our community.  It is simply exciting to see thousands of once empty square feet filled with energy.” 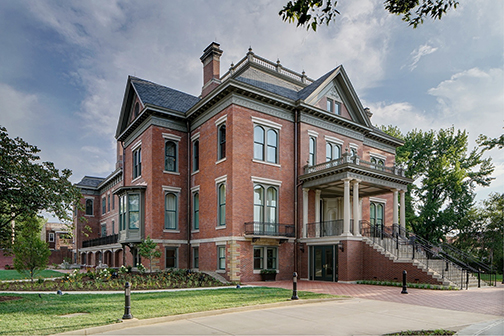 The $15 million, privately-funded renovation includes extensive interior, exterior and system repairs, with the goal of returning architectural dignity to the place that has been home to Illinois’ first families for more than a century. Overgrown landscape was cleared, and the public entry was re-oriented toward downtown Springfield, allowing for prominent views of the Mansion. Bifurcated, curving walks create gracious paths that offer enhanced ADA accessibility and sweeping vistas across the site, with inviting appeal.

The “200 Great Places” list, selected by architects throughout Illinois in honor of the bicentennial anniversary of statehood, includes the Illinois Executive Mansion. Read more about the Governor’s Mansion and other Illinois sites on the searchable AIA 200 Great Places website, illinoisgreatplaces.com/#welcome. AIA Illinois has also created a new Instagram account featuring the 200 great places at https://www.instagram.com/ilgreatplaces/ 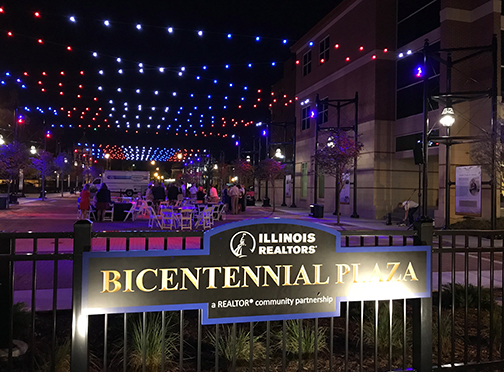 Based on recommendations made by the American Institute of Architects sponsored Regional/Urban Design Assistance Team (R/UDAT) in 2002, the city worked with the Illinois Realtors to create a continuous pedestrian walkway connecting the Lincoln Home National Historic Site with the Illinois State Capitol Complex.

“The Jackson Street Trail serves to enhance the neighborhood with towers of historic panels depicting Abraham Lincoln’s vision that America should be a nation of equality and opportunity for all. Its colorful overhead lights, seating and expertly-designed plantings all complement the newly-renovated Governor’s Mansion and other neighboring buildings. Overall, this project is also a good example of a significant public-private partnership project that didn’t happen overnight without some vision, planning and well-organized execution.” 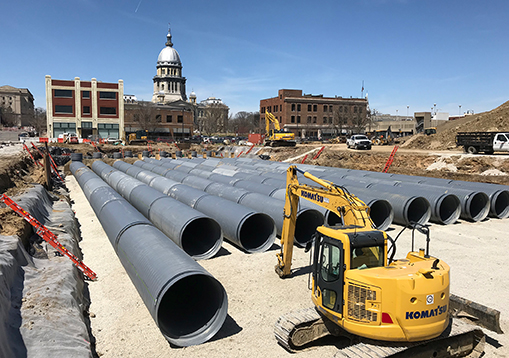 Dating back to the 1830s, Jackson was one of the city’s original roads, constructed over a portion of the Town Branch combined sewer system, a brick-arch structure constructed in the late 1860s. Devised as a modern solution, the new system helps address downtown flooding issues while also mitigating downstream water quality with a capacity to detain 340,000 gallons of storm water beneath the street. CMT worked with contractors who used pipe, fittings, tees and manifolds that were manufactured and fabricated at the ADS plant in Mendota, Illinois, to create a “subterranean solution” in an 11-ft-deep pit with 2,300 ft of pipe.

“The city approached this project as an opportunity to enhance storm water infrastructure to address surface flooding in the Governor’s Mansion and former YWCA block area.  These improvements are an immediate benefit to property owners in the surrounding area, as well as a potential asset to any future development, reducing the impact by minimizing flooding from more frequent rain events.” 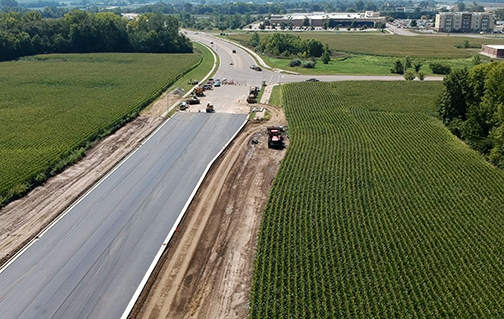 This is the final segment that completed the much-desired link between downtown and the UIS and LCCC campuses to the south. From Stevenson Drive to Toronto Road, the three-mile, five-lane arterial also provides bike and walking accommodations.  The corridor relieves congestion on Sixth Street, while providing enhanced connectivity and economic development opportunities for the area. CMT has been working with the City of Springfield on the 11th Street corridor planning and design since the early 1990s, completing segments as funds were made available.

“This project is a huge opportunity to connect campus and community. It creates transportation linkages for students into downtown and beyond with public transportation, Amtrak and more. Both the city and the campuses are strengthened and enhanced with the 11th Street extension.” 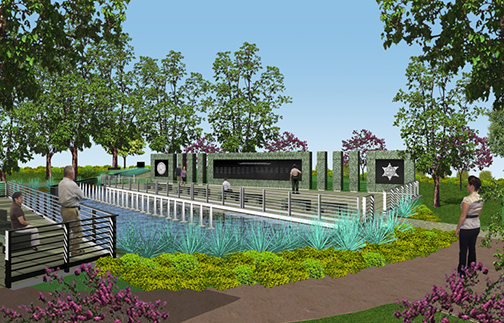 Concept drawings show the vision for the urban pocket park, located at the corner of Sixth Street and Lawrence Avenue, which is dedicated to honoring the lives of officers killed in the line of duty.  The low, black granite wall that runs west to east represents the path of service the officer embarks on after first taking the oath.  The wall is broken by the walking paths to represent an officer’s path being broken by the ultimate sacrifice.  The Memorial Wall has six pillars to represent the honor guard and two saluting trooper statues, symbolizing the great men and women who gave their lives to protect the citizens of Illinois.

“The transformation of the former Becker Park to the ISP Memorial Park will serve as a reminder to the city and visitors of the sacrifice of ISP heroes and the hazards our first responders live with daily. When designing the Memorial, it was evident early on that the motto of the Illinois State Police; Integrity, Service and Pride, would be incorporated into every aspect of the park.  The outdoor monument is an effort of the State Police Memorial Park Committee, in concert with the Illinois State Police Heritage Foundation.”

– Jack Garcia, chairman of the ISP Memorial Park and executive director of the State Police Merit Board