Home/Uncategorized/Charitable donations and the new tax laws
Previous Next

BY JUSTIN MASON AND CASEY TOM

As mentioned above, the TCJA of 2017 has also placed a cap on the state and local tax deductions. What this means is that the sum of state income taxes and property taxes will provide no additional tax benefit above a level of $10,000.

Below is a graph with a simple comparison of two identical situations from 2017 and 2018. For this example, we are assuming state taxes of $9,900, property taxes of $10,000, mortgage interest of $7,500 and charitable contributions of $5,000. In 2017, the household easily clears the standard deduction of $12,700 and was able to take full advantage of their state and property taxes, along with their charitable contributions.

However, with proper planning and the use of a donor advised fund, it is possible for this household to receive the tax benefit of their charitable contributions.

Although donor advised funds were originally recognized under the Tax Reform Act of 1969, it seems that more recently, their planning benefits are being utilized more commonly. Prior to TCJA, their primary use was to make large charitable donations to offset income in years in which a taxpayer’s income was going to be higher than usual. One can think of years in which a business may be sold, a year in which an executive was to exercise stock options, etc. The substantial increase in income presented to accelerate future charitable contributions into the present year.

Under the TCJA of 2017, the planning benefits of a donor advised fund have become increasing important. To summarize how they work, a taxpayer first establishes an account with a charitable fund. Major custodians, such as Charles Schwab, Fidelity, Vanguard, etc. as well as local organizations, such as the Community Foundation for the Land of Lincoln, can provide taxpayers with such accounts. Once established, the taxpayer will make a large irrevocable donation, representing some level of future charitable intent, enough to get over the hurdle of the standard deduction. Often times, we look at three, five or even 10 years of future contributions.

This method of contributing to a donor advised fund works with cash contributions; however, if the taxpayer can use appreciated securities from a taxable investment account then the taxpayer also receives the tax benefit of avoiding tax on the gain of the appreciated securities. This is where the planning benefit of a donor advised fund really shines.

The expansion of the standard deduction, coupled with the cap on the state and local tax deduction, has decreased many taxpayers’ abilities to clear the level of the standard deduction. For charitable taxpayers, in many cases, this has taken away the tax benefit incentive for charitable contributions. Using a donor advised fund and proper planning techniques, a taxpayer may still be able to take advantage of their charitable intent and receive a tax benefit. 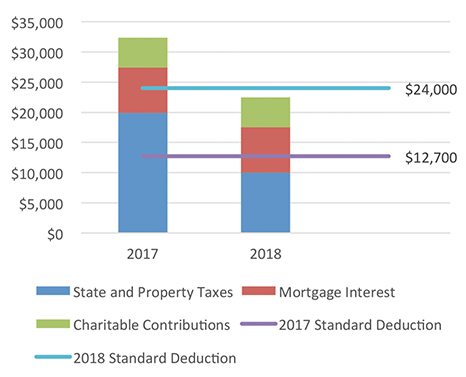 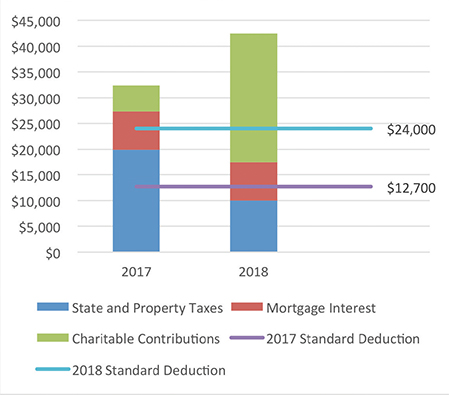 * The above example is simplified for context. Every individual situation is different and requires consideration. It is always important to consult with a qualified financial advisor and tax professional to assess your specific situation. Investment Advisory services provided by KEB Asset Management, LLC, a fee-only registered investment advisor. Tax and Accounting services provided by Kerber, Eck, & Braeckel LLP.