There were some award categories at the inaugural Illinois Capital Innovation Awards that weren’t too surprising for those who appreciate this fair city. Government solutions, health care applications and medical device innovations can be expected in a town with a thriving medical industry and a bustling political climate.

But startups? Surely, Springfield wouldn’t be too attractive for those looking to start an innovative business.

“Why wouldn’t someone want to start a business anywhere?” says Bruce Sommer, the head of UIS’s Center for Entrepreneurship and the cofounder of a group called Innovate Springfield. “I think that startup businesses are incredible experiences to find and capture opportunity. Why wouldn’t Springfield be a place to do that?”

There was plenty of entrepreneurial spirit in attendance at the University of Illinois Springfield’s new Student Union for the awards on April 6. Four different groups pitched their startup ideas, and the companies that sprung from them, to a blue-ribbon panel. Others from all walks of life, including members of UIS’s faculty and distinguished medical professionals, received awards for various innovations that help make people’s lives easier.

The awards were the brainchild of Innovate Springfield, founded by a group including Sommer in 2012. The organization has made significant strides in showcasing Springfield as a town where innovation thrives. In fact, TechCrunch, an online purveyor of technology and business news, rated Springfield as one of the 15 best places to start a business in the Midwest.

“We’re somewhat of an easy place to live, I’d say,” Sommer said. “The startup culture is not as pervasive here as in other places in the country. But evidently, the data show it’s in the top 15 in the Midwest.”

An array of businesses showcased their wares at the awards, competing for top startup, in addition to various other awards. One of them was Serious Lip Balm, a business that sells all-natural, homemade lip balm.

The company is led by Khara Koffel and Megan Luckey, women who were looking for something different when it came to lip balm. Not intending to start any kind of business, they decided to invent their own product. The result has been lip-smacking.

“We started four years ago just on a whim as a bunch of teacher gifts,” Koffel said. “It got into different people’s hands and the next thing we knew, we had a company growing before us.” 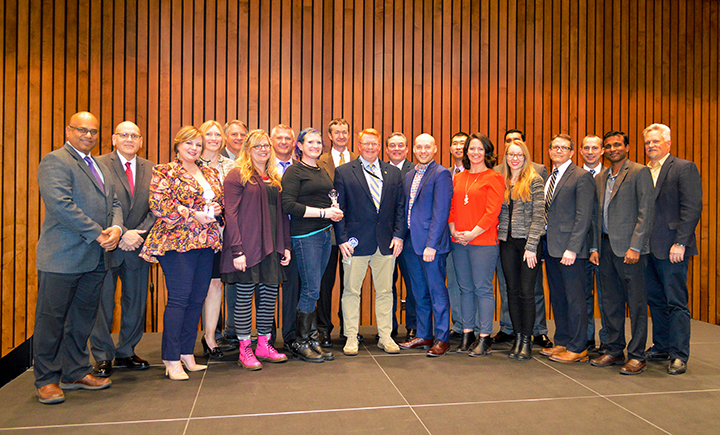 The winners of the Illinois Capital Innovation Awards. PHOTO BY | Sarah Ayers

The presentation given by Koffel and Luckey explained just how different the company was from others in the lip balm field. The company made a profit in around three months and its product is now in more than 70 retail stores. In addition to selling handmade balms, the two also are the purveyors of a website called Gooddoesgood.com, a venture that showcases various good deeds. “It’s this kind of platform that we’re using to show how positive energy being put out in the world can only make everything better,” Koffel said. “We want to try to highlight different organizations and foundations in our area that are doing amazing things, that you can add a little bit of wonderful in tiny ways and in large ways.”

The pitch impressed the judges, who named Serious Lip Balm the Innovator of the Year for startups. Other winners at the awards included Barnabas Helmy, the inventor of The Puck, a device that allows one to control several different entertainment devices with one remote control, and Andrew Arenz, inventor of the Reel Rack, a spare tire cover that also serves as a fishing pole holder.

There were awards given for medical breakthroughs. Three different awards were given to people who made various items that could be used to save lives. All three were given to doctors at Prairie Heart Institute and SIU School of Medicine, in categories that ranged from medical devices and research to health care applications.

The primary goal of the awards was to spotlight Springfield’s burgeoning business culture. Whether it was homemade lip balm or an app that shortens hospital stays, the Illinois Capital Innovation Awards showed off a side of Springfield that rarely gets mentioned outside of the regular business culture. That’s a good thing for people like Sommer, who makes his life’s work in helping people get their foot in the door.

“I grew up here in a family business. I grew up not knowing any better than business,” Sommer said. “We have reasonable amounts of innovation going on…but what’s not happening is the identification and collaboration. I felt for our community to grow in a healthy way, we need not only more innovation, but also more collaboration with industry innovators. In order to do that, we need to identify who they are and then celebrate them. Then we can make connections where their innovations have a greater impact in this world.

For many at the awards, success there will be the first step towards greater recognition and accolades. Or as Megan Luckey put it, “Total lip balm domination.”

Zach Roth is a freelance journalist based in Springfield.