Family-owned Emerson Press of Divernon has deadlines to meet

Many things have changed during the 50 years that Emerson Press has been in business. But two things have remained the same – it’s still a family-owned and operated business, and there are still deadlines to meet.

Leonard Emerson operates the business that also includes four other family members including his wife, Jane, daughter Stephanie McDannald and sons, Brett and Prentice Emerson. They also consider their regular customers to be family, several of whom have been fulfilling their printing needs at Emerson Press for more than 30 years. There is even one customer who has been with them since day one.

“We have great customers. Some may only order once or twice a year, and some once every two weeks,” McDannald said. “But I’m just as happy with that one that orders once a year as the one that orders twice a month, because they keep coming back. I want our customers to say, ‘We use Emerson Press and we are happy with them.’”

“We’ve had some customers long enough that when our designer, Michelle Waite, who has been a member of our team for over 15 years, is doing the artwork, we get to know what kind of design our customers will like,” McDannald said. “We know that some people, if you have an 11 by 17 inch sheet of paper they want something on every inch of that paper, while some people will like white space. You get to know the kind of colors and graphics that people like. It’s like taste in clothes, you know what they like visually.”

Emerson Press is a full-service print shop. They print everything from promotional items to signs and banners and have recently been screen printing on t-shirts. Their hope is that if you have a logo, they can print it for you.

The business, located on the northeast corner of the Divernon town square, occupies a space that was once a 100-year-old tavern, and one of their still-functioning presses is a century old and counting. But there are lots of new digital machines as well, so a walk through Emerson Press is like an eclectic journey through the history of printing.

But it’s still difficult to imagine that the shop started in a nearby garage in 1968.

“I started working for a company in Springfield, Marshall Mitchell Printing, and I worked there probably seven years doing art work and sales,” said Emerson Press founder and co-owner Leonard Emerson. “After he went out of business, one of the companies that we did work for asked if I might be interested in doing their work. After some thought, I bought a press and started my shop.”

“In 1968 when we started, my wife and I did all of the work in our garage,” said the 76-year-old Emerson. “She did all of the typesetting and I did the sales and the artwork. I am a graphic artist by trade and then learned to do the press work, camera work and finally the delivery. The two of us did it all.”

When the business grew, they expanded the garage. When that was no longer large enough, the Emersons purchased the downtown building where they are now located. They’ve since added on twice, and six years ago purchased the building next door. They employ six full-time and several part-time people. Five of the employees are family.

“I never really asked my kids to enter the business,’” said Emerson with a chuckle. “They all either went to college or entered the services. The thing about it is, had they not come back, I wouldn’t be in business.”

“I couldn’t find anybody that would work like they did, and with the quality I wanted. You just couldn’t find that,” Emerson said.

His daughter and sons returned at the right time, because they were around for the “big change” in the printing world, the switch to mainly computerized design and digital printing. Emerson likes the new world of printing possibilities that opened up with the digital revolution, but he occasionally longs for the good old days.

“Printing is not what it was 25 years ago. The big press back there that we used to run all of the newsletters on, those are gone,” Emerson said. “Newsletters are all emailed now, they don’t need a hard copy like they used to have.”

“Now it’s short-run, high demand where before it was larger quantities and you had to run it through the bindery,” Emerson said. “Now it might just be a piece that needs to be folded, no saddle stitching or trimming.” 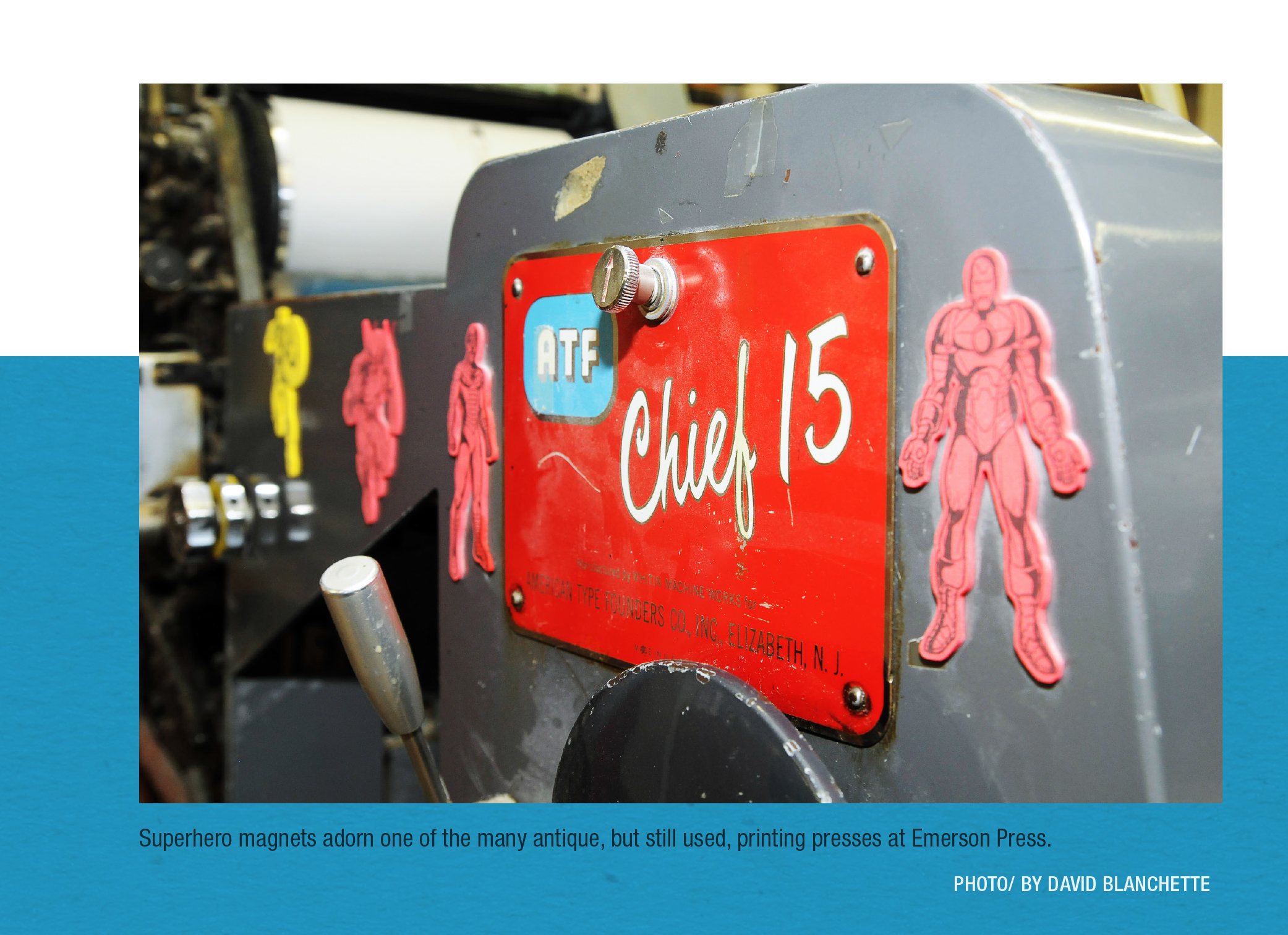 Today’s printing customers are also pretty savvy about the process.

“People are so knowledgeable about printing,” Emerson said. “They have their own computers, they know what they can do, and it puts more stress on you, the printer, because they think when they give you something, you can do it exactly like that. Well, it might not work that way, but they still have it in their mind that they know a little bit about what we do.”

Emerson said there are a number of really good print shops in the area and he’s pleased to be friends with many of the owners. What he and the other printers have noticed is that some potential customers are ordering their print work online, and he wants people to realize what that means.

“Shopping local is important. Ask if your online printer will support your summer baseball program, your basketball team or your school dances,” Emerson said. “People forget that, and I sympathize with anybody in business because we are all asked to support our community. We are glad to do it, although when you know a person ordered something online and then they come and ask you for a donation, it’s just tough.”

“You have to be friends with your customers,” Emerson said. “They have to know that I’ll do my best, I’ll go out of the way and I’ll take another step, because I want them to be satisfied when they get that package that’s got our name on it.”

And when his daughter promises to do a job for a customer with a seemingly impossible deadline?

“My dad will look at me and say, ‘You promised it when?!’” said McDannald, manager of Emerson Press. “That’s what is going to be on his tombstone, ‘You want it when?!’”

“She promises them the moon and the stars, but we can usually do it,” Emerson said. “Because it’s her name too, and when she says, ‘I can do it,’ we make sure we can do it.”

McDannald is her married name, but Stephanie is still an Emerson through and through. 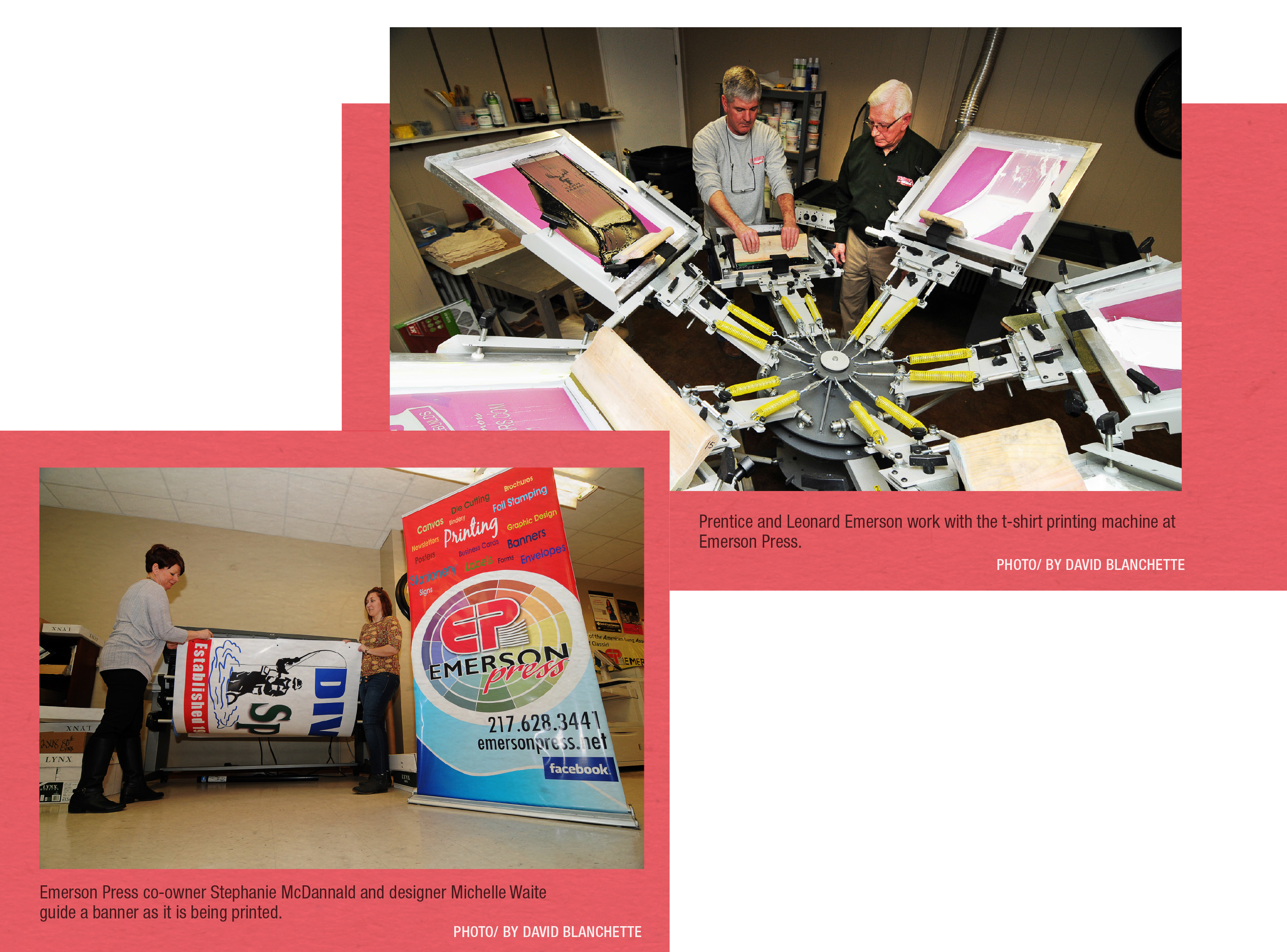 “Our quality is where we set ourselves apart from a quick copy shop. It doesn’t just get pushed through and put in a box,” McDannald said. “It’s not down and dirty. Everything we do is inspected, it’s labeled, we take pride in what we do.”

That pride comes through in jobs that Emerson Press does for many long-term customers. They do work primarily in central Illinois but ship all over the United States.

McDannald worked at a large St. Louis print shop after college, but after a few years returned home to Divernon to work with her father. Her brothers, Prentice and Brett, served in the U.S. Armed Forces but also came home to work for the family business. All of them do what is needed, regardless of the hour or the day, to get things printed and delivered.

“Dad never asked, I think he wanted us to figure out if we wanted to work here,” McDannald said. “I’ve always had kind of an entrepreneurial drive, both of my brothers are mechanical, but we are all workaholics. It all has come down to working together and having great customers. We are truly lucky to work together as a family and have such wonderful employees and clients. That is what makes the difference.”