For Dale Becker, giving is a win-win-win

Home/Articles/Secondary Feature/For Dale Becker, giving is a win-win-win
Previous Next

For Dale Becker, giving is a win-win-win

KEB makes giving back part of its corporate culture

For Dale Becker, the benefits of charitable giving add up, both personally and professionally. Becker is a CPA and partner with the Springfield accounting and management consulting firm Kerber, Eck, & Braeckel (KEB).

Becker became involved in charitable efforts, “almost out of the womb,” he said. “I was raised in a middle-class, hard-working, Catholic family. Giving back and being charitable was instilled in me by my parents. We didn’t have a lot of money, but we always gave what we could to the church and other causes we believed in.”

Of the ways to give charitable support – time, talent and treasure – Becker tries to do all three. “Over the years, I have been involved in many charitable endeavors, such as SPARC, Contact Ministries, Multiple Sclerosis, St. Agnes Parish and Sacred Heart-Griffin High School. I get involved because someone I know and trust asked me. Then, if it is a cause I truly believe in, I am all in.

“As a CPA, I get asked often to serve on boards as the treasurer or finance committee chairman,” Becker continued. “It is a natural fit and I am happy to give of my talent. I currently serve in those roles for Memorial Health System and Memorial Medical Center. Sometimes it is just my manual labor that is needed, like working on a Habitat for Humanity house this summer doing the yard work, which I also love, with a group of KEBers. The money part of giving is also so important because many charitable organizations depend greatly on donations from the community.” 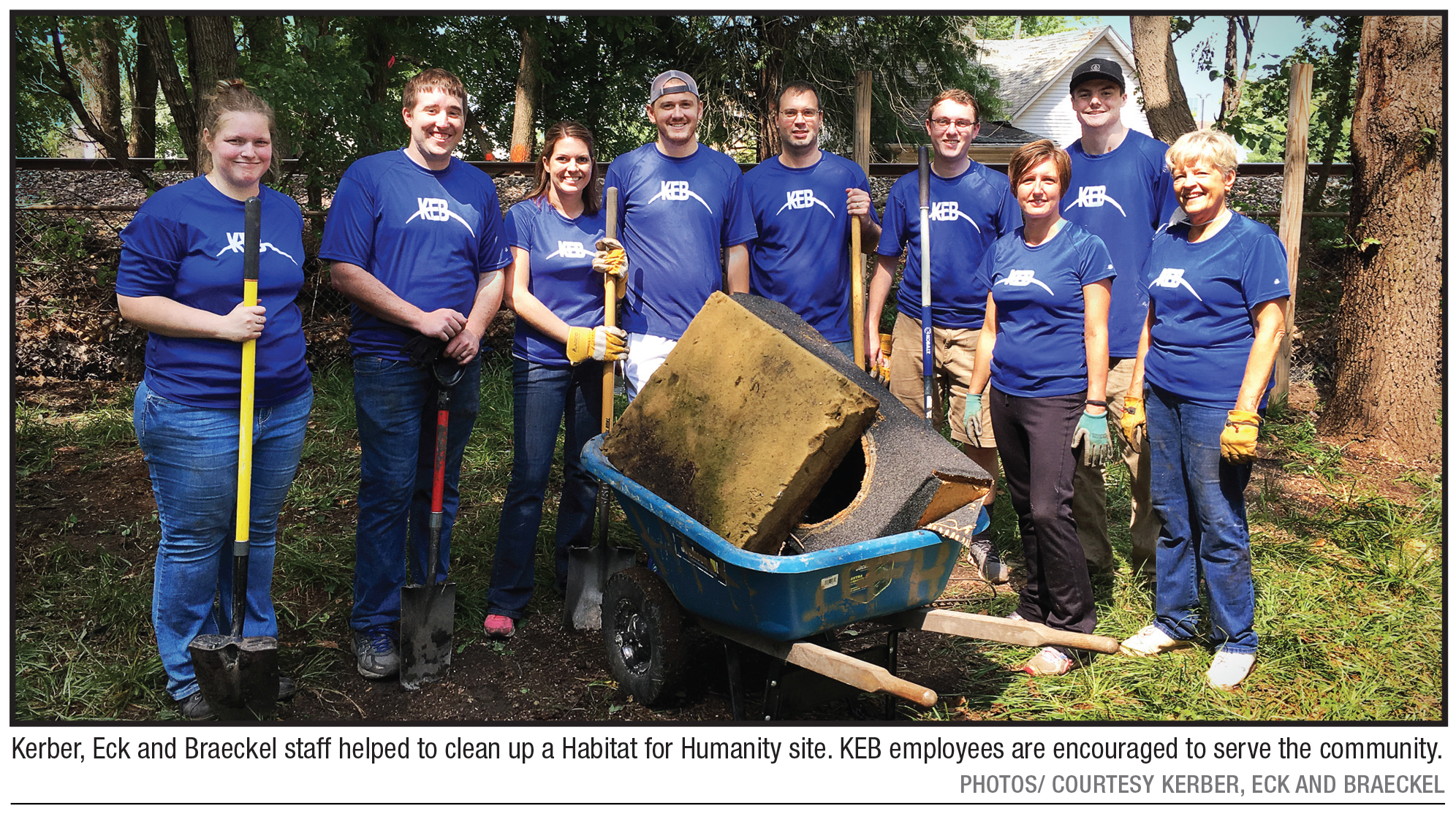 One of Becker’s most rewarding experiences was in 2014 when he and his family were the first to run the Annual United Way Campaign as a family. “It was an amazing experience,” he said. “We enjoyed doing it as a family. We had lots of community interactions and lots of brainstorming sessions to run a successful campaign. The Beckers are a passionate group.”

The Becker family passion paid off. United Way support had been decreasing for several years, Becker explained. Working to reverse the trend with United Way staff, they achieved their goal and raised more money than the previous year with a nearly five percent increase.

The passion for charitable contributions extends to KEB as well. When he started his career at KEB in 1975, Becker said “it was a perfect fit” with the firm’s culture of giving back to the community. “I had great role models at KEB, like Dan Cadigan, the most generous and giving man I have ever known. Dan’s leadership by example when it came to giving back was very contagious and has continued.”

Last October KEB completed a year-long “Give Back Campaign” to celebrate its 85th anniversary. Every employee was involved in giving back to a variety of causes. The campaign raised about $60,000 through the efforts of 95 employees.

According to KEB partner and CPA Kate Ward, who helped chair the campaign, 10 charities were supported independent of employees’ individual support. The campaign was so successful, she said, that the firm decided to implement a full-time Give Back Committee to provide coordinated volunteer opportunities for employees.

“We encourage employees to serve the community,” added Ward. That can take the form of serving on boards, volunteering and other support. In January, KEB had a group serve at the Ronald McDonald House, and they donated numerous items to RMHC for the children’s use. They are currently working on a food drive in conjunction with an in-house weight loss program  they have. There are several more charitable events planned for this calendar year.

“Giving is a very personal choice,” Becker said. “It comes from the heart. I know from a selfish standpoint, it makes me feel good. I think of this saying a lot – not sure when I first heard it – ‘What you give, you keep forever. What you keep, you lose.’ The good feeling you get from helping someone lasts forever. Many people give to a cause, especially ones where they have a personal connection. For example, you might support Susan G. Komen because you have a loved one with breast cancer. The bottom line is charitable giving and support is a win-win-win. The person or group you help wins. Your community is stronger and more compassionate. Win. And you feel better for doing something for someone else – a totally unselfish act. Win.”

Janet Seitz of Springfield writes a monthly column for Springfield Business Journal on charitable giving and philanthropy. Contact her at janetseitz1@gmail.com.