A Pleasant Plains brother and sister had big ambitions 65 years ago when they founded what became one of central Illinois’ largest agricultural businesses.

“Early on I decided we wanted to be the General Motors of the fertilizer business,” said 91-year-old Glen Brandt, the co-founder of BRANDT. “But I never dreamed that it would go to this extent.”

Glen and his sister, Evelyn Brandt Thomas, began the business that bears their name in 1953 with little more than a truck, an office and a new way of helping farmers to grow better crops. Now, BRANDT products are sold in more than 45 countries and include a full range of plant nutrition, crop protection and sustainable products for row crop, vegetable, turf, tree, lawn and garden, and aquatic applications. More than 500 people work at BRANDT, with the majority at their global headquarters in Springfield, distribution centers in Illinois and manufacturing facilities in Pleasant Plains.
“It was more luck than smarts, I’ll tell you that,” Brandt said. “I just happened to be at the right place at the right time with the right product.” 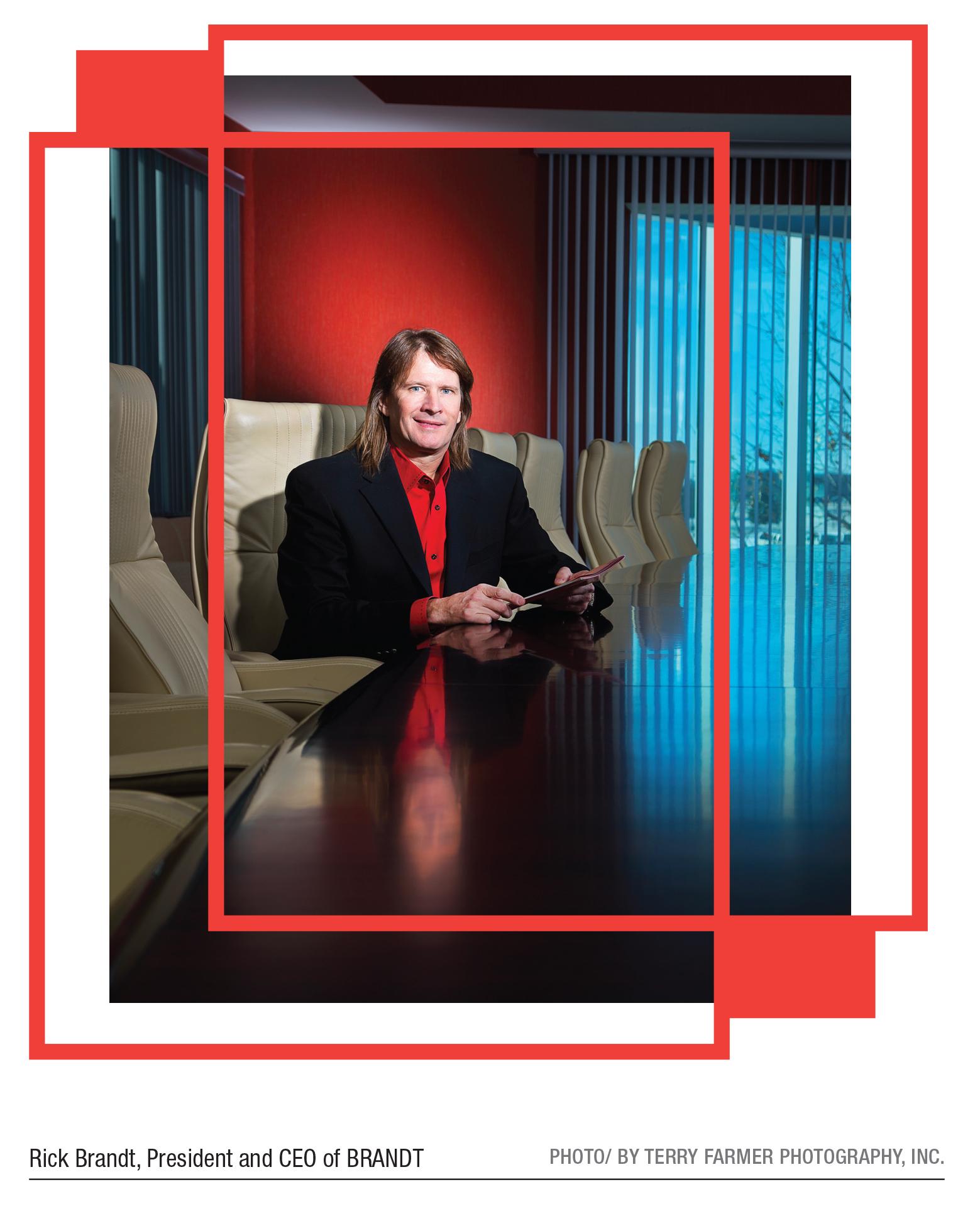 “I was doing custom hay baling and a fella came along and wanted to know if I’d do some custom application of ammonia. Then along with that I had another company that wanted me to handle some liquid fertilizer,” Brandt said. “Then I guess I was lucky enough to come up with a formula for a combination of ammonia with a phosphate starter, and it took off like wildfire. My biggest problem then was it took off so fast that I couldn’t get the ingredients.”

Brandt mixed 100 pounds of ammonia and 100 pounds of his own formula and this combination had farmers producing 100 bushels of corn per acre, an unheard of amount in the mid-1950s and double the average yield.

After the Korean War there was a surplus of ammonia available from the federal government, which had used the chemical to make explosives, and the young soft drink industry had a surplus of phosphoric acid, Brandt said. The inexpensive availability of these key ingredients helped the BRANDT liquid fertilizer business take off.

“We had no idea it would grow into what it is today. Even my parents, they’re probably up there in heaven and can’t believe what they are seeing,” said co-founder Evelyn Brandt Thomas, who is now 94 years old. “Sometimes I just have to pinch myself and think, ‘Is this really happening?’ I wake up every day and thank the good Lord that I am still able to participate in it, enjoy it and see it.”

Glen was the salesman and applied most of the liquid fertilizer products in the beginning, and Evelyn took care of the financial end of things.

“My C.B. handle was ‘the Hawk.’ That tells you that I was watching over the pocketbook,” Thomas said. “I was the one to go to the bank and say, ‘We need some more money,’ and put my name on it.

“In the mid-1950s the money was not there, and my husband, who worked for the state of Illinois, was the only one who had a job,” Thomas said. “Glen and I worked but we couldn’t even cash a check until the end of the year when the farmers paid their bills.

Glen and Evelyn still come to the office in Springfield, where Glen’s son, Rick, is now the BRANDT president and CEO. Both think Rick has done a wonderful job growing the company into the international agricultural force it is today.

“Don’t tell Rick, but he’s done extremely well,” Glen Brandt said. “I don’t want to brag on him too much or he’ll be wanting another raise!”

For CEO Rick Brandt, the feeling of admiration is mutual. 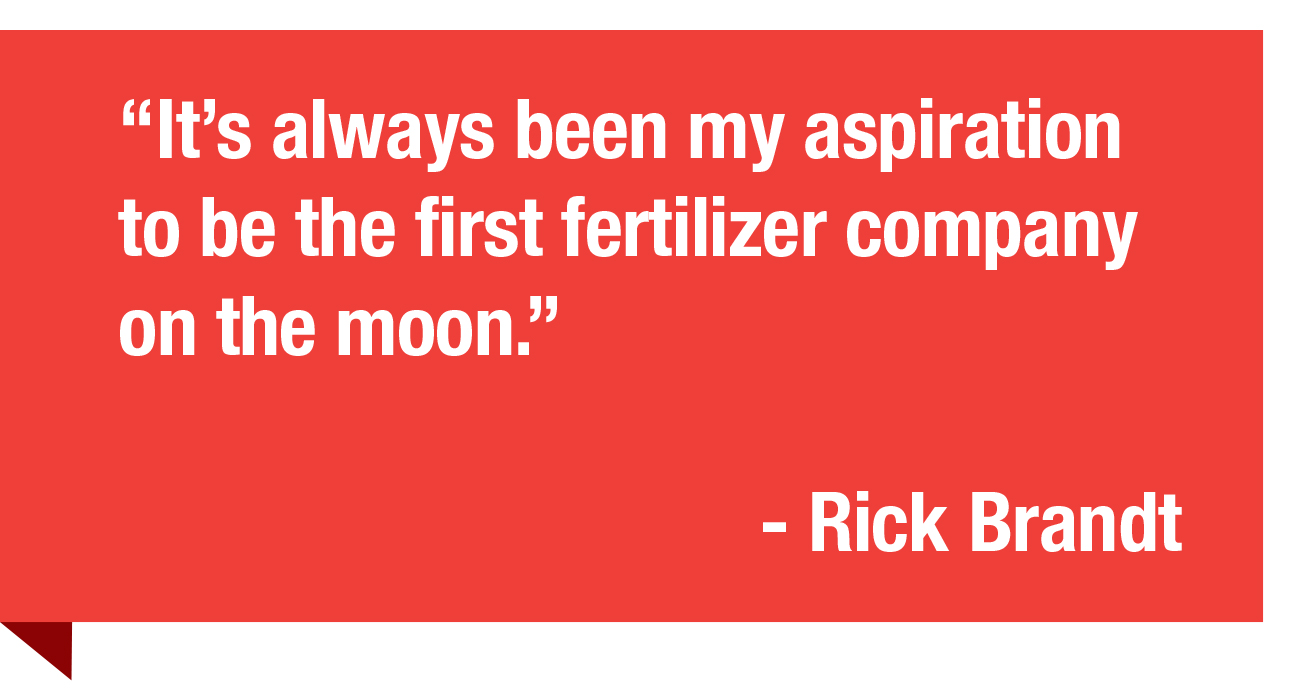 “The first generation did a great job of building a great company, culture and reputation in the world of agriculture,” Rick Brandt said. “But it’s not in my demeanor to just want to be a part of something. I wanted to grow the business when I was named CEO 23 years ago.

“It’s always been my aspiration to be the first fertilizer company on the moon,” Rick Brandt said. “I’ve got a Photoshopped picture of an astronaut planting the BRANDT flag on the moon. I used to say that kind of tongue-in-cheek, but as time goes on it becomes closer to a possible reality. I probably need to call Elon Musk or somebody like that and say, ‘Hey, don’t forget me when it’s time to fertilize the crops up there.’

“In central Illinois we’re a leader in serving farmers directly. Nationally, we’re one of the leading, if not the leading, micronutrient product producers,” Rick Brandt said. “And on a global scale we are quickly growing our brand as a high-quality ag input company.”

BRANDT has sold products internationally for more than 20 years through trusted partners. The company acquired its first international production facility in Brazil three years ago, and two years ago they acquired a facility in Spain. Rick Brandt said more expansion in Brazil is likely in the short term, and the company sees Southeast Asia as the next biggest market opportunity. But Pleas

ant Plains will always be home, he said, and the family business will always treat customers and employees like family.

And you’re family whether you need thousands of gallons of fertilizer or just some slug bait.

“My favorite obscure product we offer is ‘Sluggo.’ It’s a quirky name but it’s a great product. It’s organic and sustainable, and it is the leading slug bait on the market,” Rick Brandt said. “You can be in any group of people, whether it’s ag people or turf people, at dinner and they’ll be like, ‘Oh, you make Sluggo!’ That’s awesome!”

Many central Illinois residents are familiar with the BRANDT name through the company’s retail warehouses that serve farmers’ fertilizer, seed and crop protection needs. There are 25 of these BRANDT retail agronomy facilities in the Midwest, all in central Illinois.

BRANDT’s chief marketing officer, Karl Barnhart, said the second of the company’s three divisions, dealer support, is focused on large-scale purchases of nitrogen, phosphorous and potassium. They buy these fertilizer commodities in the tens of thousands of tons. 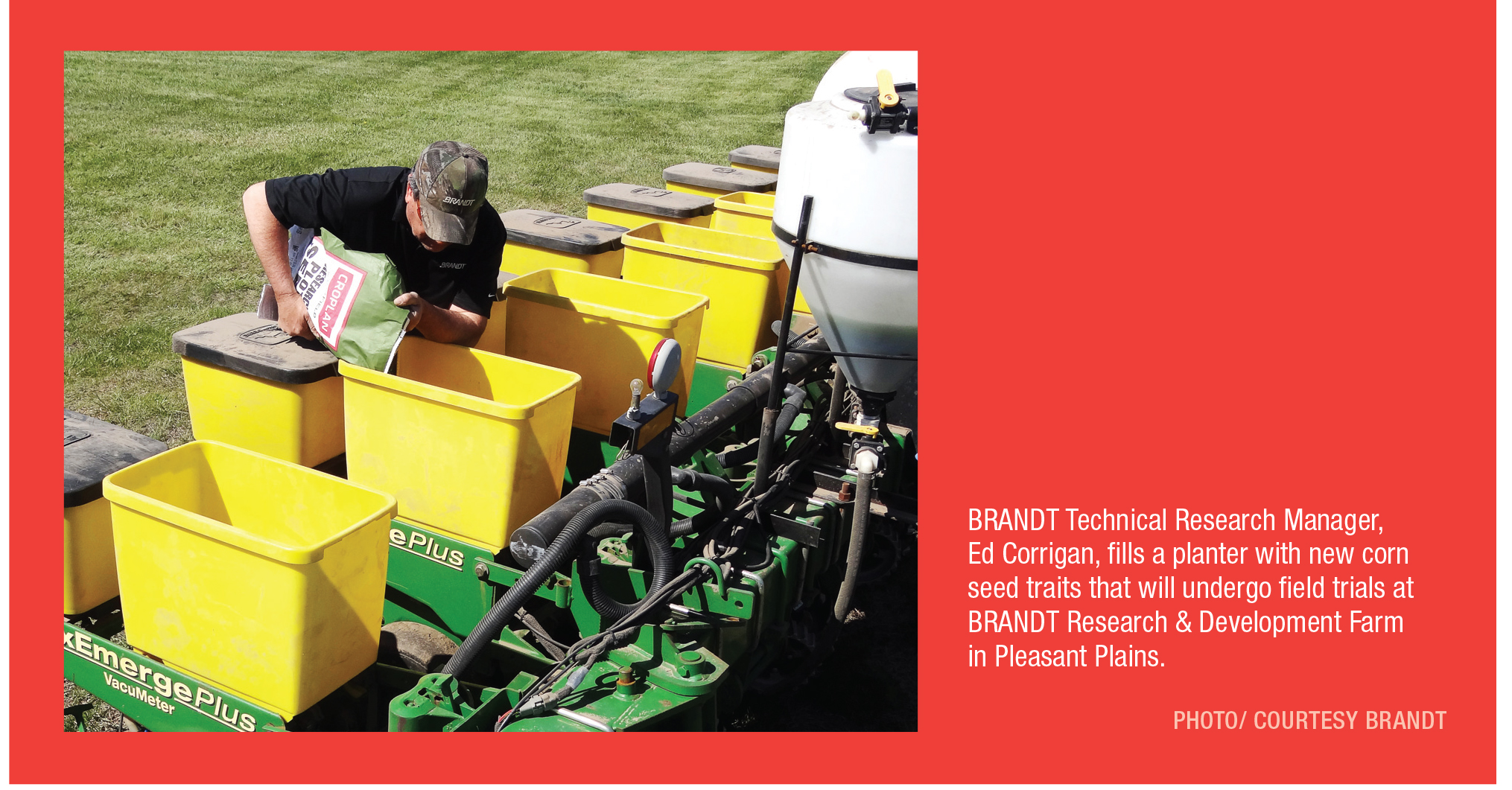 The third division, the one Barnhart said is the fastest-growing, is BRANDT’s specialty formulations group.

“We invent, develop and manufacture products that sell across the world, and we are really, really good at foliar micronutrient products,” Barnhart said. “Foliar micronutrients are fertilizers that are sprayed onto the growing plant. The key that makes ours so good is that we make sure that these products mix well with everything else that a farmer is putting into his sprayer tank.”

BRANDT sells these specialty products in 49 states, every state except Alaska, and in 46 countries. The products are manufactured in Pleasant Plains; Fresno, California; Avon Park, Florida; Logan, Utah; and Brazil and Spain. A new, expanded chemistry lab and testing facility will soon open in Pleasant Plains.

“Our products are on everything from avocados to zucchinis,” Barnhart said. “We’re on agave in Mexico that gets processed into tequila. In Spain we are on some of the best and most expensive olives and olive oils in the world. Same thing in Italy. Olives are a huge market for us.”

“Here in central Illinois it’s corn, beans and a little bit of wheat, but when you go to California, all of a sudden we’re on 350 different kinds of crops,” Barnhart said. “That creates the need for whole new sets of knowledge. For example, we’ve got an agronomist who is really focused on high-end specialized Chinese crops. He’s constantly working on bok choy.”

In addition to plant nutrition inputs, other BRANDT products include water treatment products for irrigation systems, ponds and lakes; products for golf courses and turf fields; herbicides and pesticides; and products that enhance natural processes and give growers tools to help crops realize their genetic potential.

“In central Illinois, sustainability means using less and softer chemistries and being good stewards of the land. Nutrient runoff is a huge issue in the watershed,” Barnhart said. “So it means applying nutrients at the right time and at the right rate and using the right process.” 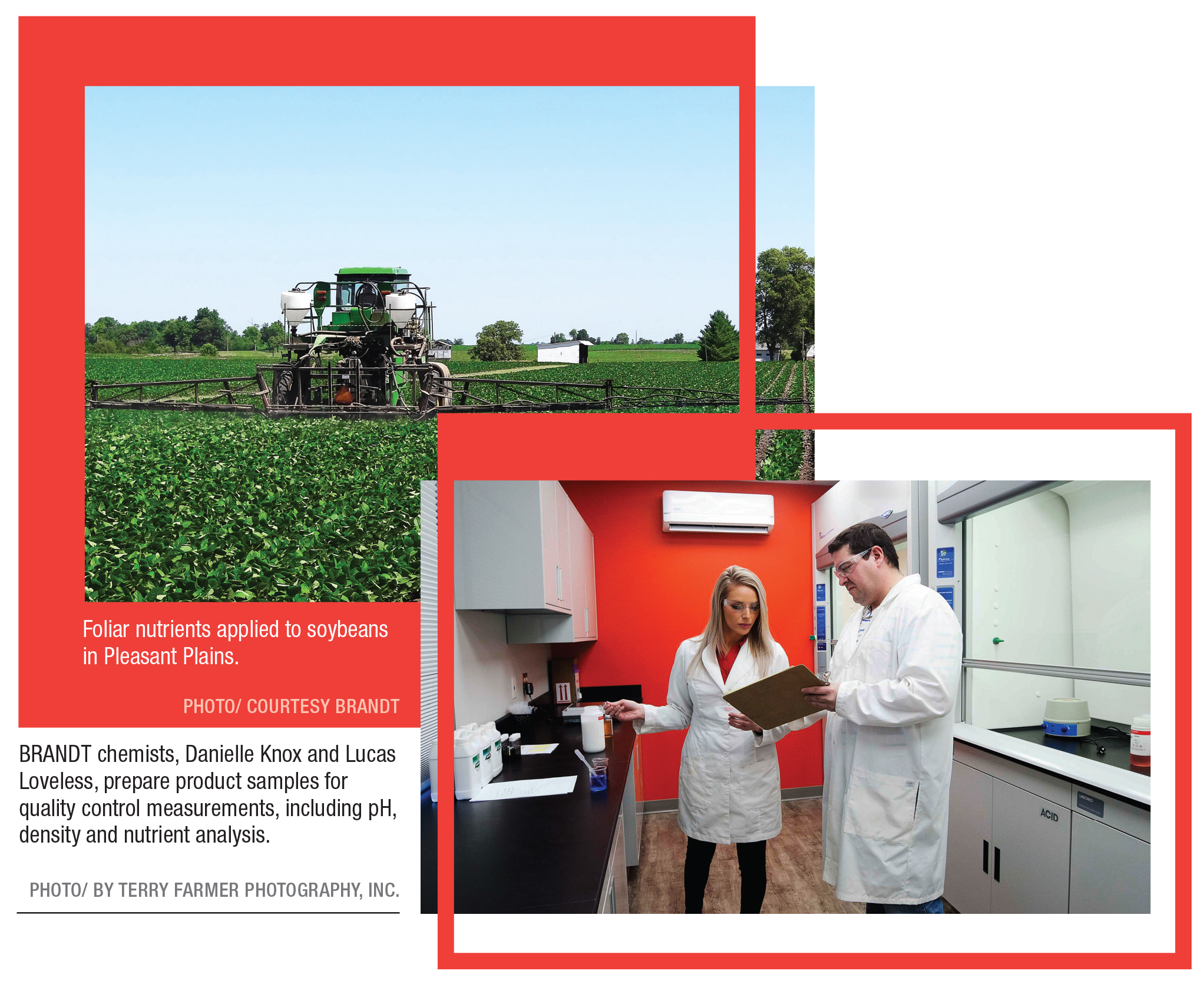 “There’s a massive need for low-impact sustainable products and services in Europe,” Barnhart said. “The European Union has gone toward less chemicals and more sustainability, and that’s a strategic advantage for us.”

Despite its international reach, BRANDT remains an American company serving American agriculture, and lately they have become big supporters of the all-American sport of NASCAR.

“We started our first NASCAR sponsorship seven years ago as a little bit of a test. We can’t out-advertise the bigger ag companies, but we can do something a little bit different,” Barnhart said. “The double bonus is that the driver of the car we sponsor, Justin Allgaier, is a kid from Riverton. And he is a great ambassador for our company and our products.”

Five years ago CEO Rick Brandt formed The BRANDT Foundation as a way to give back to the community. The BRANDT Foundation recently did a fundraiser for the Memorial Medical Center Foundation and raised more than $30,000, a third through employee contributions. Other organizations have benefited from BRANDT generosity, going all the way back to softball teams the company sponsored in its early years.

“I’m second generation and I was offered a great opportunity,” Rick Brandt said. “The third generation, my 18-year-old daughter, is coming along now. She’s always been a part of the company and has always wanted to be a part of the things we do. I hope that she aspires to do what I have done. If she doesn’t, that’s fine – I’m not pressuring her – but if she does, I think that would be awesome.”

David Blanchette is a freelance writer from Jacksonville and the co-owner of Studio 131 Photography in Springfield.