It’s an exciting time for foodies in Springfield, especially in terms of new downtown eateries. And VELE is one that I’ve been particularly excited about, since Justin Richardson from New Berlin’s The Garden is in charge of the kitchen.

VELE, which is located in the former Café Brio space, is Italian for “blank canvas.” It holds itself out as a blank canvas of “possibilities” from an “ever-changing menu” inspired by Italian heritage, classical French cuisine and “modern Italian influences.” That’s a tall order, but VELE delivers.

The food can best be described as modern coastal Italian, with a focus on small plates designed to be shared among diners and a limited selection of entrees from southern Italy.

VELE’s décor, like its menu, is clean, tight and focused. We appreciated the separate seating area where diners can enjoy a cocktail before dinner or an aperitif afterwards. The designer managed to deftly reflect a sense of modern austerity coupled with just enough comfort. Like the subway tile in the bar, it all works together in harmony.

My guest and I arrived on a Friday night shortly after VELE opened. (Note, VELE is only open for dinner, Wednesdays through Saturdays.) Reservations were a good idea.

We were quickly shown our table, opting for a high top along VELE’s exterior glass wall. We recognized quite a few of our fellow

diners, and were pleased to see that VELE drew almost equally between the older and more established citizens of Springfield and the younger (and obviously much more trendy) crowd. It was a good vibe.

The menu is slanted toward small plates. While fine for two people, it’s more fun with a larger crew due to the ability to sample more of the offerings. The entrees are more limited and consist of a handful of pastas, seafood and chops. There’s also a strong wine list and a host of eclectic, and more traditional, cocktails.

We had a hard time narrowing down our selection of small plates (priced between $8 and $12). It was with some regret that we passed on the polpettes (slow-roasted meatballs, tayzaki and feta – $8) and the porchetta eggplant (herb-roasted pork belly, crispy eggplant, herb cream sugo, red cabbage and Italian verde – $10). But trying to avoid gluttony, we zeroed in on the spicy calamari (calamari, Calabrian chili hot sauce, and buttermilk and dill aioli – $10) and the flatbread (focaccia, basil pesto, tomato sugo and burrata – $9).

Before our small plates arrived, one of the owners came by to make sure that things were going well. Turns out that the kitchen had cranked out some cioppino (an Italian-American seafood stew, allegedly originating from San Francisco) the night before, and without even asking, he brought by a cup for us. It was, probably, the best dish of the night – loaded with seafood and popping with flavor. If it’s on the menu again, make a point of ordering. I should have asked for some to take home.

The calamari was slightly overcooked (it’s notoriously hard to cook) but the creaminess of the aioli worked well with the chili hot sauce. Think of

more sophisticated and subtle hot wing sauce and you’ve got the idea.

The flatbread, perfectly cooked, was basically an elevated pizza – with sugo (a slow-cooked tomato sauce), burrata (Italian milk cheese made from mozzarella and cream) and basil pesto. Flavors were spot on and well balanced such that none overpowered the others. The dish managed to showcase restraint, tradition and modern touches. 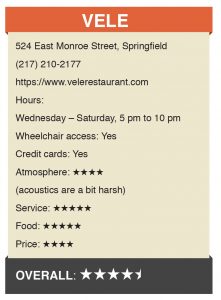 My guest reported that the filet came out cooked medium rare, exactly as ordered, and was so tender that it could have been cut with a fork. She found the horseradish a bit overpowering (I disagreed) but was pleased with the depth of the bordelaise and the creaminess and garlic flavor of the potatoes. No doggy bag was required for this one.

The pappardelle was a simple dish – and I mean that in a positive way. It takes guts to put something like this on a menu because each element has to be close to perfect. And VELE nailed this one. The highlight was the braised lamb. The kitchen managed to coax out a ton of flavor from the braise without drying out the lamb. The sugo combined an earthiness and brightness that managed to cut through the richness of the lamb, and also coated the pappardelle pasta without being too heavy. This was a perfect dish for a cold winter day.

There are three desserts on the menu (two from Bunn Gourmet), but by that point we were too full to partake.

VELE’s prices, while on the higher end for Springfield, are in line with its peers and the quality of the offerings.

Thomas Pavlik is an attorney at Delano Law Offices, LLC. Contact him at tpavlik@delanolaw.com.