LRS turns 39 years old this year and is going stronger than ever, with operations on five continents and the ongoing expansion of its world headquarters in Springfield. But the global leader of information technology solutions remains firmly rooted in the Springfield community and dedicated to the well-being of its employees, many of whom have been with the company since its founding.

“Employees get a Rolex watch on their 25th anniversary. It’s amazing the number of Rolex watches we’ve given out over the years,” said LRS Vice President Ryan Levi. “We appreciate the employees and we don’t take them for granted. Employees are what make the company great, and giving them benefits and extras are some of the ways we show our appreciation for their dedication and hard work.”

The company began with a good idea and blossomed from there.

“My dad (Dick Levi) developed a product for CIPS, which is now Ameren, and they realized it was something they could market around the world,” Ryan Levi said. “He developed the first software so you could print from large IBM mainframe systems anywhere throughout the company. Before, if you did work on a computer and needed to have it printed, you had to go to the data center to get your print jobs.”

LRS bought the software rights from CIPS so it could market the software to other companies, then as LRS grew they added their own marketing, sales and distribution divisions. The initial printing software product is now used by approximately 65 percent of the Fortune 500 companies, Levi said.

The LRS global headquarters is located on West Monroe in Springfield, where construction is underway on a $25 million, 58,000-square-foot building with space for 177 offices and work stations, a 72-seat auditorium, and 10 meeting/conference rooms. Construction is scheduled to be complete by the end of 2018, and it will allow LRS to add from 45 to 70 new jobs, with the majority of those based in Springfield. Twenty-one new jobs have already been added since the building’s June 2017 groundbreaking.

Recent LRS acquisitions include the U.S.-based electronic printing security firm Capella Technologies and Cirrato, a company based in Sweden.

LRS is a privately held company that has experienced steady growth since its founding. It’s not the meteoric growth that stockholders of publicly traded companies seek, but LRS sees that as a good thing.

“Public companies are always based on ‘What have you done for me this quarter?’ and typically they have outside investors who are looking for double-digit returns and a constant high growth pattern,” Levi said. “The nice thing about being a private company is, as long as we continue to grow, we are happy with a steady incline. And with our recent acquisitions, we don’t expect those dividends to be paid out for several years, so we can make those long-term decisions.”

Those long-term decisions that LRS can make because it is a privately held company have improved the way they help clients manage the flow of documents. The industry trend now is toward mobility, and employees need to be empowered to work from home, on the road or from multiple office locations. Vice President Greg Matthews said a recent acquisition of a software firm is helping LRS to keep its customers’ information secure.

“Typically, when a user prints a document the printer in large organizations is located in some shared space, so the document sits on the printer and then you would go and pick it up,” Mathews said. “But a lot of times someone else could walk by and pick up that document, either accidentally or on purpose, before you could get there. 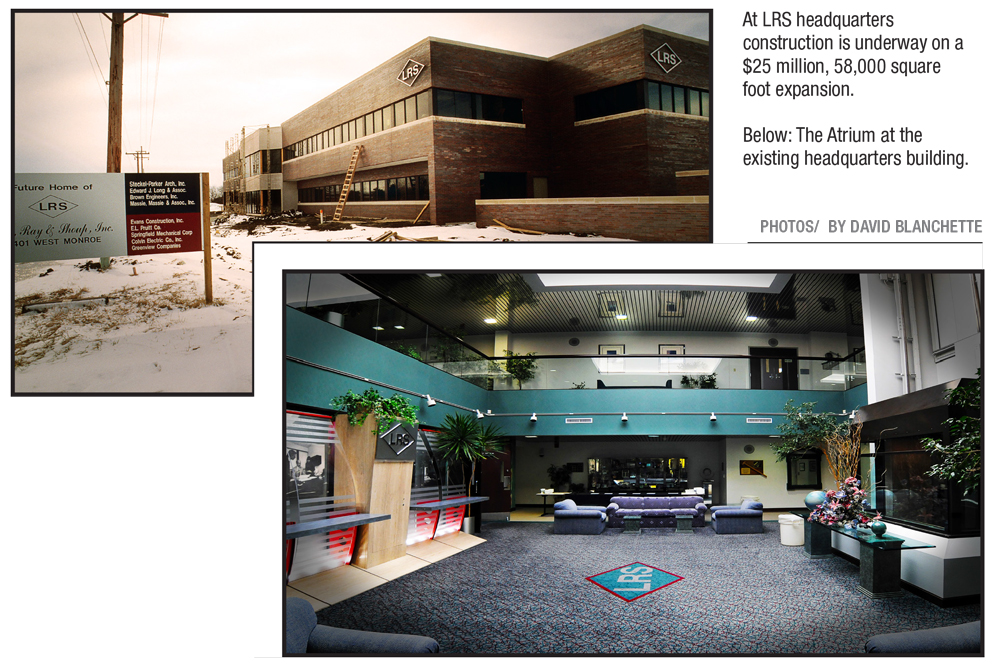 “One of the newest technologies that we are employing now as part of this new acquisition is the ability to print to a queue that holds it, then you go to the device, swipe your badge, and it gets printed with you standing right there,” Matthews said. “Health care is a big market for us, and this new system is a tremendous asset when you think about the security of patient information.”

Product reliability is also a focus for LRS, and the company has a large and well-trained support team to handle customer concerns, Matthews said. LRS software runs in the background but is key to driving crucial applications of a business.

“A printer problem at a hospital, for instance, could have people waiting to be admitted because there aren’t admission forms to sign. Or in the manufacturing industry, where printing of shipping documents and labels are important for the manufacturer to make sure the shipping of their products make it onto the trucks and out the door on time,” Matthews said. “Many of the largest manufacturers in the world utilize LRS software to make sure there is no delay in shipping their products.

“For most businesses, time is money. When items don’t ship, trucks cannot depart or planes cannot leave the gate, and this can have a huge impact on the business and its ability to generate revenue,” Matthews said. “In a lot of cases, the printing of key documents typically is what drives the business and when those documents don’t print, the business stops.”

The global focus of LRS also comes with challenges that most people could never imagine. The two largest banks in Russia, for instance, use LRS software. But LRS must carefully negotiate through the United States sanctions that are in place against Russia.

Matthews said Southeast Asia is a difficult market because the cost of products is a lot cheaper there and they prefer to write their own applications. However, Europe, South America, and especially Australia and Singapore, are hot markets right now, he said.

LRS has several different business divisions that are the direct result of the firm’s work in the information technology (IT) industry.

LRS Consulting Services is where it all started, and since 1979 they have been at the forefront of the ever-evolving recruiting and consulting business. The Enterprise Output Management division was formed next, in 1981.

LRS Retirement Solutions has provided defined benefit pension administration software since 1987. They help public retirement systems across the U.S. to offer improved service to their members.

LRS IT Solutions, formed in 1995, focuses on providing infrastructure and cloud operations to meet the business needs of its customers.

LRS Education Services has offered technical training to more than 30,000 people since 1994. The division is a Microsoft Gold Certified Partner for Learning and offers CompTIA, Cisco and VMware Certification Training, is a certified EC-Council Training Partner, and a Pearson VUE Authorized Test Center.

“Dad had bought a boat and needed someone to captain it,” Levi said. “The gentleman who captained his previous vessel did small repairs on boats, but he wanted to get out of that business. So my dad and several others at the company thought, ‘I wonder if this is something we can acquire and grow in scale?’

“So, once we decided, we went all in. I was in banking in St. Louis at the time, and I was told that LRS was looking to invest heavily in Florida, and would I go down there for two years to get it up and running,” Levi said. “It ultimately ended up being closer to eight years, but now I’m back up here full time. Currently, I’m in Florida for about a week every other month to oversee those operations.”

LRS was named one of the best places to work in 2014 by the Springfield Business Journal. The company also strives to hire veterans through its Heroes at Work program.

“It’s hard for a company to grow the way that LRS has and to continue to maintain that small-company feel,” said LRS senior manager Shannon Heisler. “LRS has somehow figured out how to do that. There’s a close-knit feeling with the employees.

“The average length of employment is 12 years. That’s unheard of, especially in the technology industry,” Heisler said. “And our overall retention is 90 percent.”

Levi, Ray & Shoup, Inc. had a Springfield focus from day one. Their first community sponsorship was a Little League team. Since then, LRS has been a major supporter of local causes and organizations including Habitat for Humanity, Hoogland Center for the Arts, Kidzeum, Memorial Center for Learning and Innovation and Relay for Life.

In addition, LRS officials have just announced that they have signed a three-year agreement to be the presenting sponsor of the local Web.com golf tournament. It will be called the Lincoln Land Championship Tournament presented by LRS.

“We are very fortunate to be in the position that we are in making Springfield our home, so we want to continue to contribute and give back to the things that make Springfield what it is,” Matthews said.