Lincoln Land now has better facilities for training aircraft mechanics, who are in demand

“As a young person, you aren’t thinking about being an aircraft mechanic – it doesn’t even come onto your radar,” said Dave Pietrzak, program director of Lincoln Land Community College’s aviation department which, despite Pietrzak’s concerns, has recently undergone a conspicuous growth spurt.

Located at the Abraham Lincoln Capital Airport, the Levi, Ray and Shoup, Inc. Aviation Center encompasses a new 5,000-square-foot classroom facility featuring three classrooms as well as a computer lab. Until this past summer, though, classes had been held in a double-wide trailer inside a hangar. “The trailer couldn’t fit any more students,” said Pietrzak. “We were turning people away.” An $850,000 donation from Dick Levi allowed construction of the new facilities, which the program director describes as a “nice place with modern audio-visual equipment.”
Students spend approximately half of their time in these classrooms, the other half in various shops located in the adjacent hangar area. “They learn things in the classroom and apply them in the shops,” Pietrzak explained.

In the sheet metal shop, students gain firsthand experience with materials that airplanes are made of and processes used by mechanics. Pietrzak pointed out a group of newer students building models of airplanes, a process which allows them to learn cutting techniques and grilling as well as tapping into their creativity. “They have a lot of different manual skills that they have to accomplish over the 18-month program,” Pietrzak said.

While airplanes were originally constructed out of wood, more modern versions are made of carbon fiber composites, which students in the program work with. “That’s the future,” said Pietrzak. “The new Boeing 787, that’s what it’s constructed of.”

Students in the program, the only one of its kind in central Illinois, go through an 18-month training, providing them with the skills to have the Federal Aviation Administration deem them experienced enough to take the series of nine exams required to receive an airframe and power plant license. According to Pietrzak, aviation is a growth industry. “Mechanics are in such huge demand today – there’s not enough people doing it,” he said. He said 75 percent of the aircraft mechanics currently working are 50 years old or older. “What’s gonna happen in 10, 15, 20 years when they retire?” he asked. “There is more aviation happening now than ever before – not just airlines but corporate aviation, general aviation. There is also a huge pilot shortage. Just about every field in aviation is hurting for people.” He said that in Illinois alone, the aviation industry has a $41 billion impact.

Another group of students is disassembling engines, learning how to make repairs and perform inspections. “A lot of what we do is trying to find problems before they happen,” Pietrzak explained. “They still have to learn what the inside of a jet engine looks like – the idea behind it might be simple but it’s a very complicated machine when you dig into it.”

A number of aircrafts in various states of assembly are parked in the spacious hangar deck. Piertzak says that while a few of the small planes run, none of them are considered airworthy. Students are individually assigned engines which they take apart, look for problems, put them back together again, take them out and “run ’em up.” Some of the engines are mounted on airplane frames and some on run-up stands. These engines, called recips (short for reciprocating) are so long-lived that, according to Pietrzak, many planes that are flying today were made in the ’50s and ’60s – and are in need of mechanics who know how to work on them. “You don’t drive crafts like these with your hands, you steer with your feet,” said Pietrzak. “It’s a skill they have to learn. These students aren’t here to be pilots but they are going to have to know how to operate an airplane on the ground.” 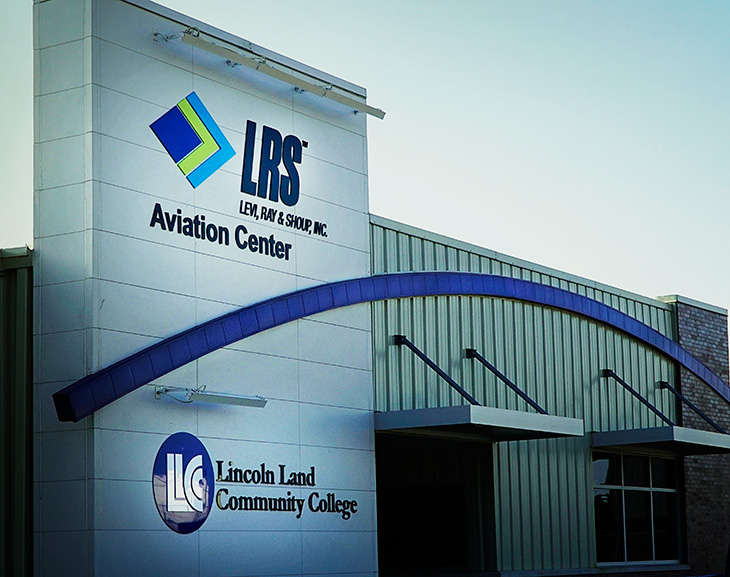 During the 18-month program (which some schools stretch over two full years) students spend 30 hours a week training from 7:30 a.m. to 3:30 p.m., Monday through Thursday. The FAA requires a minimum 1,900 hours of training, but students are eligible to take one series of their exams one year into the program, becoming airframe mechanics after a year, then six months later finish the power plant portion of their training.

LLCC has an agreement with aircraft maintenance company StandardAero, also located at Capital airport, to hire students. “They told us the other day that 20 percent of their workforce is graduates from this program,” said Pietrzak. The school also has an internship with the company, allowing students to serve as interns after school and on Fridays. At the end of that internship they may be offered a full-time position with the company.

Pietrzak, who spent years teaching in K-12 institutions, laments aspects of the state of public education. “Public schools don’t teach shop classes anymore,” he said. “It’s all geared towards getting a four-year university degree – which is fine, but not everybody is going to do that. All of the trades – carpentry, plumbers, mechanics – are all hurting. And those kinds of jobs traditionally provide some pretty good paychecks.”

One student who went through the program, Jeff Owen, finished up at Lincoln Land with an associate degree in applied science, then went on to earn a bachelor’s degree in aviation from Southern Illinois University in Carbondale. After he had been working in the industry for a few years while still in school, SIU began employing Owen as a mechanic to work on their flight school aircraft. After graduating, he worked in a number of different places around central Illinois until this past summer, when one of the Lincoln Land aviation program’s full-time instructors retired, at which point Owen was hired to teach in the program that gave him his start.

“It’s nice to have a young person teaching,” said Pietrzak. “Jeff is in his mid-20s and can relate well and provide a good role model for the students.”