Dan Deweese and his growing painting company – “People love the work we do. They’re amazed by it.”

Home/Articles/Secondary Feature/Dan Deweese and his growing painting company – “People love the work we do. They’re amazed by it.”
Previous Next

Dan Deweese and his growing painting company – “People love the work we do. They’re amazed by it.”

“When I started, it was just me,” said Deweese.

He brought on a friend two weeks later, and was up to five employees after three months, and a staff of 12 at the end of the first year.

Today, the 33-year-old is giving his interview in his 16,000-square-foot building that houses eight vans and 17 employees in a true family business that includes his father, Rich Deweese, brother, Stephen Deweese, and sister, Amy Peterson.

The youngest of seven children, Deweese said he started painting professionally for his dad in high school around age 14.

“I was certainly painting before that, probably around the age of 10. We’d go out and start with the basics – fill holes, sand, vacuum. We’d do the stuff that no one wanted to do. I was the baby of the family, so I was always doing the grunt work,” Deweese said.

The work ethic he learned as a child has helped carry him through the first couple years of owning a business that required 16-hour-days, seven-days-a-week.

“When I first started, I was in the field every day and in the shop every night. I did both ends of it,” Deweese said.

His work paid off.

“We started gaining some ground with some good contractors right off the bat which helped us grow,” Deweese said.

“Right now, we are doing exteriors that we quoted a year ago. That’s how many we had booked coming into the season,” Deweese said.

Besides interiors and exteriors, the company also includes a custom paint and wood finishing shop.

“We do a lot of new cabinets for builders in the area and hard specialty finishes, like glazes, distressing and staining. People bring stuff they find on Pinterest and we help re-create it,” Deweese said.

In June 2016, his sister, Amy Peterson, came onboard as his office manager after selling her business, The Closet Guy, that she owned for 14 years with her husband, Brooke.

“Amy couldn’t have come at a better time,” said Deweese. 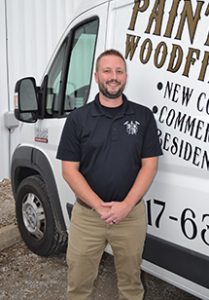 “He was exploding,” Peterson said.

“I think a lot of what I did for The Closet Guy prepared me for this because I have already worked with some of the builders and we have kind of the same customer base,” Peterson said.

She also understands the challenges involved with running a small business.

“I’m passionate about it, knowing that Dan has everything on the line,” Peterson said.

Her arrival has freed up Deweese to focus more internally.

“For me, making sure my employees are taken care of is my number one priority; my customers are second,” Deweese said. “Since I came on, we’ve been able to offer group health insurance and dental, in addition to life insurance,” Peterson said.

“I started this shop to give my employees what I always wanted as a painter. I always wanted a job that had health benefits but none of them did. I’m one of the only nonunion companies that offers those types of benefits to the extent that we do,” Deweese said.

“I’m a painter with 40 years of experience,” said Carl Hart.

“I can honestly say that Dan Deweese is the best employer, running the best outfit, I’ve ever worked for,” Hart said.

“There is a sense of family between Dan and his crew, but when it comes down to business, we know Dan’s high standards demand nothing less than perfection in the quality of work his customers expect and deserve,” he added.

“Our guys work hard. Painting is a physically demanding job. It is hard to find good painters and we want to keep them,” Peterson said of their all-male workforce.

Besides just rewarding quality work, Deweese and Peterson say they want to do their part to improve the image and opportunities associated with the trade.

“Nobody goes to high school and says, ‘I want to be a painter when I grow up.’ Well, unless you’re Dan,” Peterson said, pointing to her brother.

“We want people to know it is OK to be a painter. It can be a very valued trade… I want them to see themselves as skilled craftsmen, because they are,” Peterson said.

“It’s true. People love the work we do. They’re amazed by it,” Deweese said.

With his trusted friends and family holding things together, Deweese has been able to take a step back and enjoy life as a newlywed outside of work.

Now, most of his time is spent in the office and doing the estimates. Though, he admits, the customers are usually surprised when he shows up at the door.

“Every other estimate the person says something like, ‘I was expecting someone much older than you.’ I have to explain my family history and let them know I do know what I’m talking about,” Deweese said.

When asked what the future holds, Deweese gives a very clear answer: “I don’t know.”

“Honestly, when I started this business three years ago, I didn’t think we’d be where we are today for another 10 years. For me to grow, multiply times 20 in three years, that was more than I expected,” Deweese said.

He may not have the next few years planned out, but as a painter and a company, he plans to be around for at least another 30.

“Everybody needs paint,” Peterson said. u

Whitney Barnes of Springfield can be reached at whitneyleighbarnes@gmail.com.