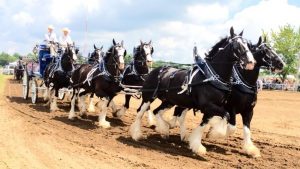 A team of horses from the Express Clydesdales. Photo courtesy of Express.

They weigh as much as a ton. Their feet are as big as dinner plates, and their shoes weigh three pounds each. A man of average height barely reaches to tops of their shoulders. They are the revered Clydesdale horses, and they’re coming to Springfield for the Illinois State Fair, thanks to staffing firm Express Employment Professionals.

These aren’t the same horses associated with a famous beer brand, however. These horses are a rare black and white, but no less stately.

Express Professionals is headquartered in Oklahoma City and has a franchise in Springfield. The company has sponsored the horses since 1998, when Express co-founder Bob Funk first encountered black Clydesdales at an agricultural exhibition in Canada. Since then, the Express Clydesdales have performed many high-profile duties, from walking in the Macy’s Thanksgiving Day Parade to escorting England’s Prince William and his wife Kate, the Duchess of Cambridge, at the Calgary Stampede in 2011.

A type of “draft” horse, Clydesdales were first bred in Scotland in the late 1800s. Gradually, the much larger modern Clydesdale emerged through selective breeding during the early to mid-1900s. Only about 10 percent of Clydesdales in the U.S. are black and white like those sponsored by Express. Most are the more familiar bay variety: brown with white markings and a black mane and tail.

A six-horse team of Express Clydesdales will appear in Springfield for the Illinois State Fair Twilight Parade on Aug. 10. The horses will remain on display at the fairgrounds from Aug. 11-13. During the horses’ appearances across North America, Express accepts donations for charity.

“We look forward to providing this unique opportunity to the community and also taking advantage of this exciting time to benefit our St. John’s Children’s Hospital,” said Jim Britton, Express Springfield franchise owner.

Erin Sommer, search and contract specialist with Express in Springfield, says the horses reflect the company’s desire to be “champions.”

“We aim to be on that same level helping to establish hope in our community” she said. “We want to be the champion helping people to find jobs, and for helping companies to find good people here in the Springfield area.”

“These horses are just amazing to experience up close,” she said. “They incite a certain raw emotion in their presence.”