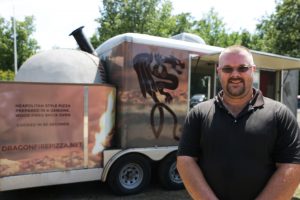 Dave Saam with one of the Dragon Fire Pizza trailers set up at the Illinois State Fairgrounds. Photo by Patrick Yeagle.

What do you get when you put a wood-fired brick oven burning at 1,000 degrees inside a trailer? Besides a very warm trailer, you get Dragon Fire Pizza, a food truck expanding to Springfield from Champaign.

The truck will debut here during the Illinois State Fair and then establish a weekly route around the city.

The first Dragon Fire Pizza food truck started in Champaign in November 2014, owned by Dave Saam, his wife, his brother and his father. Saam says the truck features Neapolitan-style pizza, which has a thin, hand-tossed crust, tomato sauce, fresh mozzarella and other toppings, cooked for just 90 seconds in the 1,000-degree wood stove. He says a 10-inch pizza made to order takes four to five minutes from the moment the order is taken to the moment it’s served up.

“It lends itself well to street food and the lunch crowd because it’s so fast,” he said.

Before Saam helped start Dragon Fire Pizza,he was part owner of a different company which offered motorcycle training. When the owners decided to go their separate ways, Saam says he had to decide whether to “get a real job” or start another business. While considering the potential customer base of various business ideas, Saam compared the 10 percent motorcycle ridership in the U.S. with the estimated 94 percent of people who eat pizza, and the decision was made.

“Truthfully, I think that extra six percent is a statistical anomaly,” Saam joked, implying that everyone likes pizza.

The response to Dragon Fire so far in Champaign has been great, Saam says, the team’s vision was always to expand. Their goal is five units in five years. Springfield was a natural option for expansion because of its similar size to Champaign and the large number of office workers. Saam’s brother and co-owner, Del Saam, lives in Chatham and will manage the Springfield truck.

Saam says the food truck frequents farmers markets, in part because of the local ingredients available there for making pizza. Dragon Fire currently uses mozzarella from Ludwig Farmstead Creamery in Fithian, along with sausage from a butcher in Champaign. Saam hopes to find Springfield-area sources for ingredients, as well.

What Saam likes most about the food truck business is the relationships made with other vendors and with customers.

“My absolute favorite part has been meeting people,” he said. “I’ve gone to so many more interesting places than if I had been sitting around asking myself what to do that day. I really feel like we’re part of the community.”