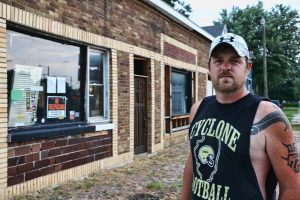 Ponics Project owner Jeremy Mann, shown here at his building in 2016, had hoped to establish a hydroponic garden and community center at 1901 Elizabeth St. Photo by Patrick Yeagle.

The City of Springfield this week began demolishing a north-end building constructed in 1885.

A demolition permit was issued this week following a two-year legal battle, during which the building’s owner attempted to establish a hydroponic garden and community center at the site.

The Ponics Project owned 1901 Elizabeth St., a 132-year-old building which originally served as Ridgley village hall, before the village was annexed into the City of Springfield in 1907. The building also once served as a fire station, but it became dilapidated and was described by the city as dangerous before demolition began Tuesday. 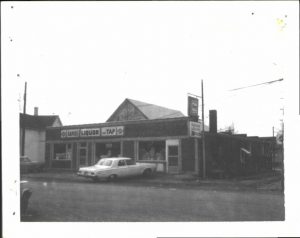 Ponics Project owner Jeremy Mann fought the city to keep the building from being demolished, but Sangamon County Associate Judge Rudy Braud signed a demolition order for the building in March of this year. In May, Braud denied a motion by Springfield attorney and former alderman Sam Cahnman, who represented Mann, to modify or vacate the order.

Other permits recently issued by the city include the following:

Solomon Colors, Inc. obtained a permit for an addition to its building at 4050 Color Plant Road. The addition was made possible by expansion of an enterprise zone earlier this year.

SJ Valentine LLC obtained a flood plain permit for Aquamarine Car Wash, to be built at 2600 Prairie Crossing Drive. The permit lists the building as having two car wash bays, four detail bays and storage rooms. The contractor has not been named.

Target Corporation obtained a permit to remodel the Target retail store at 3445 Freedom Dr. The remodel includes upgrades to floors, fixtures and finishes in the home department , accessories and apparel department and Starbucks coffee shop. The listed contractor is B&B Electrical Inc.

James Myers obtained a permit to remodel Del’s Popcorn Shop at 3013 Lindbergh Boulevard, Suite A. The contractor is Victor Capranica, and the project valuation is $3,500.

Joseph Black obtained a permit to remodel the office building at 2402 W. Jefferson St. AHI Electrical and Insulation Contractors Co. is the contractor. The project’s valuation is $25,000.

Land of Lincoln Goodwill obtained a permit for an accessible restroom remodel at 2001 Wabash Ave. E.L. Pruitt Company is the contractor for the project, which has a valuation of $78,160.