The City of Springfield hopes to use TIF money to alleviate flooding on Jackson Street downtown, which could facilitate development of the empty North Mansion Block.

The city’s economic development panel voted Tuesday to okay a request from the city to use TIF money for the project’s planning. The request now needs final approval from the Springfield City Council.

Jackson Street is one of Springfield’s oldest streets, platted some time in the 1830s. It’s a focal point in efforts to redevelop part of Springfield’s downtown because it is flanked by the North Mansion Block and the Illinois Executive Mansion. The city is evaluating proposals to develop the North Mansion Block, and the Illinois Executive Mansion is currently undergoing renovations to make it more accessible to the public. The east-west Jackson Street also runs from the Lincoln Home National Historic Site to the Illinois Capitol Complex, and Illinois Realtors are pursuing a plan to demolish a former bank building in favor of a public gathering space.

Springfield mayor Jim Langfelder appeared before the Springfield Economic Development Commission Tuesday, asking for $205,500 from the downtown TIF district to pay for engineering and architectural services. The proposed project would involve digging up Jackson Street between Fourth and Fifth Streets, along with the southern 100 feet of the North Mansion Block, to install underground pipes which would store flood water from the Town Branch sewer. The sewer is a former creek which runs diagonally through the area. It often floods the overlying surface due to inadequate capacity during storm surges. 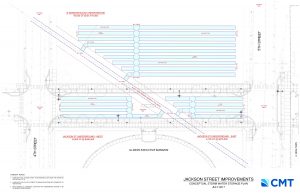 Steve Schroll with Springfield engineering firm Crawford, Murphy & Tilly Inc. said the underground flood storage project would eliminate from consideration developments requiring deep foundations on the southern portion of the North Mansion Block, but that was already a restriction because of the flooding.