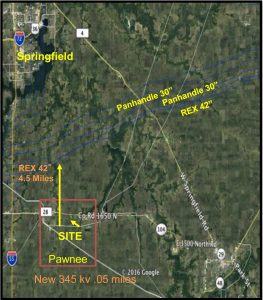 A proposed natural gas plant near Pawnee would bring needed development to Sangamon County, according to an economic impact study released this week by the Greater Springfield Chamber of Commerce.

The study comes as the Springfield City Council weighs whether to approve a deal with a plant that would partly compete with Springfield’s own power plant.

EmberClear Corp. is a Calgary-based energy company seeking to build a power plant near Pawnee capable of producing up to 1.1 gigawatts by burning natural gas. The company is asking the City of Springfield for tax incentives that would help fund the $1-billion project, which would be called the Lincoln Land Energy Center.

The Center for Governmental Studies examined the economic impact of the proposal on behalf of the Greater Springfield Chamber of Commerce, finding that construction of the plant would create about 650 temporary jobs and 35 permanent jobs, while creating million of dollars in economic activity through worker wages, material purchases, supporting industries and other factors.

“For more than a decade, our community has dealt with a decline in state jobs, followed by the Great Recession and then followed by an ongoing financial crisis at thestate that has stunted our community’s economic growth,” said Chris Hembrough, president & CEO of the Greater Springfield Chamber of Commerce. “Sangamon County needs an economic shot in the arm that puts people to work, creates wealth and provides our families who have fallen on hard time economically a pathway to prosperity. … Now is the time for our community leaders to come together for our community, for our businesses and for our families looking to climb the economic ladder.”

While Springfield City Water, Light and Power only directly provides electricity to Springfield and the surrounding area, the utility is part of a larger regional organization allowing it to send surplus electricity to the “grid.” That means that while CWLP doesn’t directly compete with other power generators like EmberClear for customers, its product is sometimes sold on the market alongside that of other generators. In addition, Illinois’ “deregulated” energy market allows customers to choose which company produces their electricity, even if they can’t choose which company transmits it to their homes or businesses. In effect, CWLP’s coal-burning Dallman power station stands to lose some market share if another power generator sets up shop nearby – especially one burning cheap natural gas.

The city commissioned its own economic impact study on the project, which concluded that CWLP stands to lose nearly $20 million in revenue over 20 years if the EmberClear plant is built – mostly due to congestion in the electrical grid. In response, Springfield mayor Jim Langfelder’s administration has negotiated a potential deal with EmberClear for a $3 million initial payment to CWLP, plus 25 years of annual $800,000 payments. That would total $23 million over 25 years. If the deal is approved and the EmberClear plant is built, any time CWLP needs more power than it can generate itself, the utility would be required to negotiate first with EmberClear for any surplus power. However, that doesn’t mean CWLP would be bound to buy from EmberClear exclusively or at all.

View an Aug. 8 presentation by EmberClear to the Springfield City Council Committee of the Whole here.

The deal is pending approval by the city council and is slated for discussion at the Sept. 5 meeting. The project would also need approval from several regulatory bodies at the state and regional levels. If approved, construction could start in Sept. 2019.