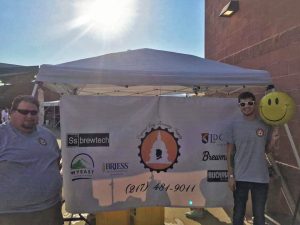 Springfield beer and wine brewers have a new option for supplies with the opening of Capitol City Brewing Supply this week.

Blake Burris says his father, Jeremy, got into homebrewing with wine, then expanded into beer. Blake, now 23, says it took him a while to get interested.

“It seemed expensive, and I couldn’t even drink it,” he said with a laugh.

Finding Springfield lacking in brewing supply offerings, they began frequenting a shop in Bloomington and were soon connected with a community of fellow enthusiasts there.

“So many people are a part of it,” Blake said. “Clearly, there are alot of people who like the hobby, why not build a place in town?”

“There’s such a connected community around it,” he said. “You take pride in the product you made and show it to other people. It’s not about making money, but about sharing what you’ve made.”