Home/News/People on the Move/Springfield trivia buff to appear on Jeopardy! gameshow
Previous Next 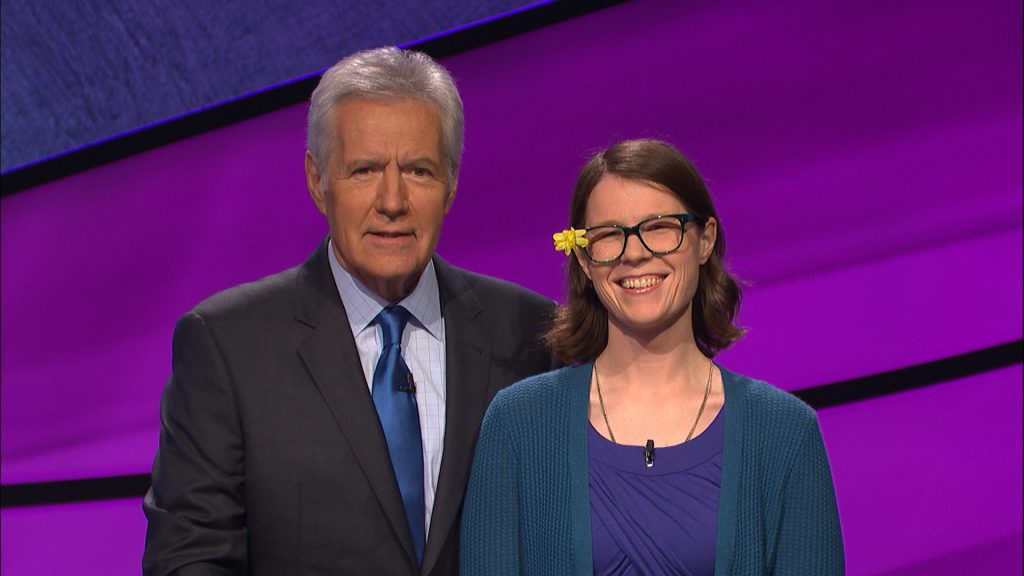 Jill Staunton of Springfield was always a curious child – so much so that her fourth grade teacher referred to her as a “walking encyclopedia.” That love of learning has earned Staunton a spot on the gameshow Jeopardy! this week.

In her day job, Staunton is a caseworker for the Illinois Department of Human services. On the side, however, she writes questions for Trivia Workshop, a Springfield-based company hosting trivia nights across the city. The company is owned by Russ Friedewald.

At a July 10 trivia night hosted at Hy-Vee in Springfield, Staunton explained the lengthy process to appear on Jeopardy!, including multiple tests, interviews and dry runs. Staunton waited in the contestant pool for months before being chosen. She describes the taping as fun but nerve-racking. She adds that the contestants are sometimes placed on risers to make sure they’re roughly the same height.

“I was nervous and my legs were shaking,” Staunton said. “I was just hoping I didn’t fall off the riser. It goes by really, really fast.”

Friedewald at Trivia Workshop says Staunton “is always one of the best in the room” at his trivia nights. She has written about 30 rounds since submitting her first questions in 2015.

Friedewald runs four pub quiz nights per week around Springfield. The business started about 15 years ago as a church fundraiser. He says that, like Staunton, his own love of trivia started when he was young.

“I grew up loving trivia and game shows, and really got hooked when I started beating my parents’ friends at Trivial Pursuit when I was 12 or 13,” he said.

Staunton isn’t the first Jeopardy! contestant at Friedewald’s trivia nights. He says Jason Sass, one of his former scholastic bowl teammates while growing up in Riverton, appeared on the gameshow in 2002 and won the July 10 trivia night at Hy-Vee.

It was no surprise to Friedewald when Staunton was selected for the gameshow.

“She definitely has the knowledge you need to pass the initial test, and she’s a unique personality, which is what producers look for in contestants,” he said. “I would have been shocked if she had been passed over after an audition.”

Staunton will appear on Jeopardy! on July 13. The show, which was taped in March, airs locally on WAND-TV.

This article has been updated to include additional details.

By sbjadmin|July 12th, 2017|Categories: News, People on the Move|0 Comments