A proposed facility providing assisted living on Old Jacksonville Road in Springfield would be bordered by new homes, according to a zoning and annexation request filed with the city.

The Springfield Planning and Zoning Commission will meet July 19 to consider a handful of zoning requests, including one which would clear the way for the assisted living facility and residential plots.

Wess Partnership LP, which shares an address with William and Susan Patton of Springfield, is seeking rezoning and annexation of two plots of land on Old Jacksonville Road, located west of Koke Mill Road. The land would host Cedarhurst of Springfield Assisted Living and Memory Care, a proposed 65,000-square-foot assisted living facility planned by Dover Development LLC. The $12-million facility would have 73 living units and employ about 50 people. 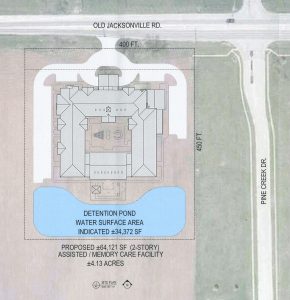 The land is currently zoned by Sangamon County for agricultural use, so the owners are requesting it be annexed by the City of Springfield and the northern plot rezoned for office use. The northern plot would be given a conditional use permit allowing it to exceed the 30,000-square-foot limit for commercial buildings adjacent to residential plots. The site was previously considered for a grocery store, according to the petition. The southern plot is being considered for rezoning to residential use, in anticipation of new single-family homes being built there.

Also under consideration by the planning and zoning commission are the following:

-A petition by Bb Properties, LLC, to reclassify the property at 1800 E. Washington St. from light industrial to highway business service district. The 22,800-square-foot building, which was previously leased to the Illinois Department of Human Services, would be used to lease office space for commercial purposes.

-A petition by Rockford Properties, LLC, to reclassify the property at 519 Bruns Lane from residential use to general residence and office use. The single-family home on the property would be used for office or administrative space. The owner requests a variance on the ten-foot buffer yard requirement and a two-year grace period to comply with parking requirements.

-A petition by KM & JO Corp. to reclassify the property at 1128 S. Fifth St. from general residence and office use to neighborhood commercial and office use. The building would be renovated and leased to an existing tattoo business. The owner requests a variance to use right-of-way parking on Vine Street instead of the required five off-street parking spaces.