In 1868, John Dean Gillett was known as the “Cattle King of the World.” The influential businessman was a close friend of Abraham Lincoln and was known for, among other things, developing the Shorthorn cattle breed. He established his farm on Elkhart Hill, north of Springfield, and after being in the family for several generations, the historic farm is slated for auction in August.

The sprawling, 785-acre Old Gillett Farm sits on the highest point of land – nearly 800 feet high – between Chicago and St. Louis. Buildings located in Springfield are visible from the farm on a clear day, dotting the horizon. The farm overlooks Interstate 55, making the vehicles passing below resemble toy cars from a distance.

The Gillett House and the smaller Drake House, built in 1873 and in the 1930s, respectively, cap the top of the hill. The Gillett mansion was originally built in 1870, but was ruined in a fire and rebuilt in 1873. The mansion features seven bedrooms, five bathrooms, a powder room and three fireplaces.

Furniture and art pieces spanning 150 years adorn every room of the 10,000-square-foot house. Every room is styled differently to show the range of tastes and family contributions to the farm’s decor. Glass chandeliers from New York City welcome guests upon entering the big house, while ceramic tiles depicting animal scenes frame each fireplace, and the original cast-iron stove dominates the large kitchen.

In 1906, the Gillett family began to expand the home, adding 22 rooms and a water tower to the original farm house. The Gilletts employed German woodcarvers to use walnut timber from the surrounding trees to build the interior panels and the staircase. Renovations were completed in 1908, and the farmhouse hasn’t been changed since. 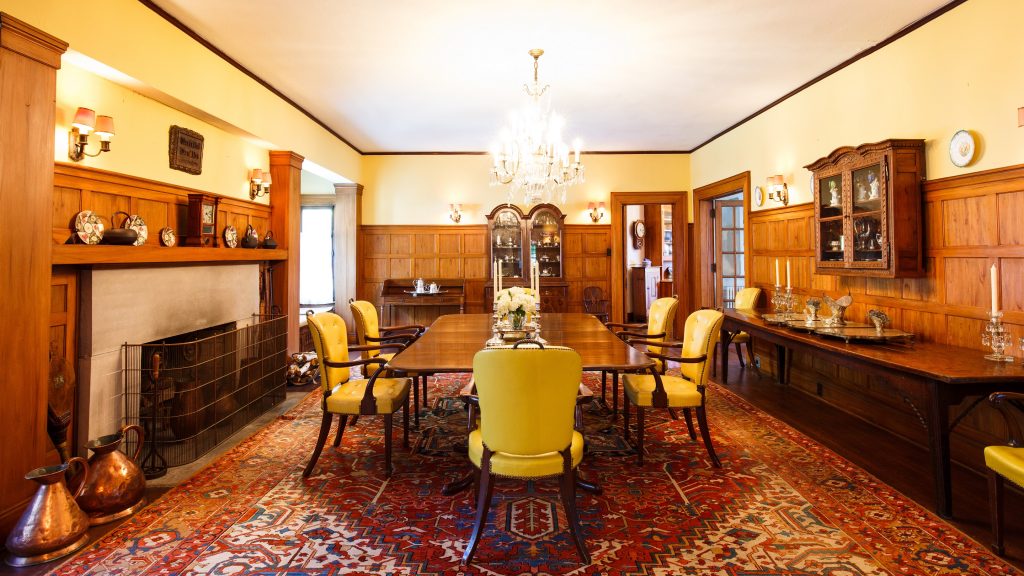 The large dining room in the Gillett House leads to a kitchen with its own eating area next to a large, cast-iron stove. Photo courtesy of Fine and Company.

The kitchen has the greatest mixture of the past and the present within its large quarters and many rooms. A plate warmer constructed of pipes sits behind the main door to the kitchen. The family reportedly used the plate warmer to impress guests while hosting events. Hot water pumped inside the pipes kept warm the plates which sat on top of the many shelves. In the main kitchen area, a modern-day microwave sits close to a stove and two refrigerators. An adjacent pantry holds several locked metal containers that were once considered the icebox, where milk and other perishable items were stored. Blue and white ceramic jars containing flour sit neatly on the counter.

Gillett had a strong influence as a businessman on central Illinois. He bred and raised livestock, annually shipping more than 2,000 cattle and 1,000 hogs to Europe. That made Elkhart an important shipping town on the Chicago & Alton Railroad during the 1800s.

The family also has a rich history dating back to Abraham Lincoln being the family’s lawyer. When Gillett and two other businessmen decided to plat a new town to take advantage of a proposed railroad depot between Springfield and Bloomington, they turned to Abraham Lincoln to handle the legal work. They eventually named the town Lincoln, making it the only town to be named for Abraham Lincoln before his election to the presidency.

Lincoln would also frequently stay at the Kentucky House while in town. The Kentucky House no longer exists at the bottom of the hill, but it would have provided shelter for traveling lawyers. 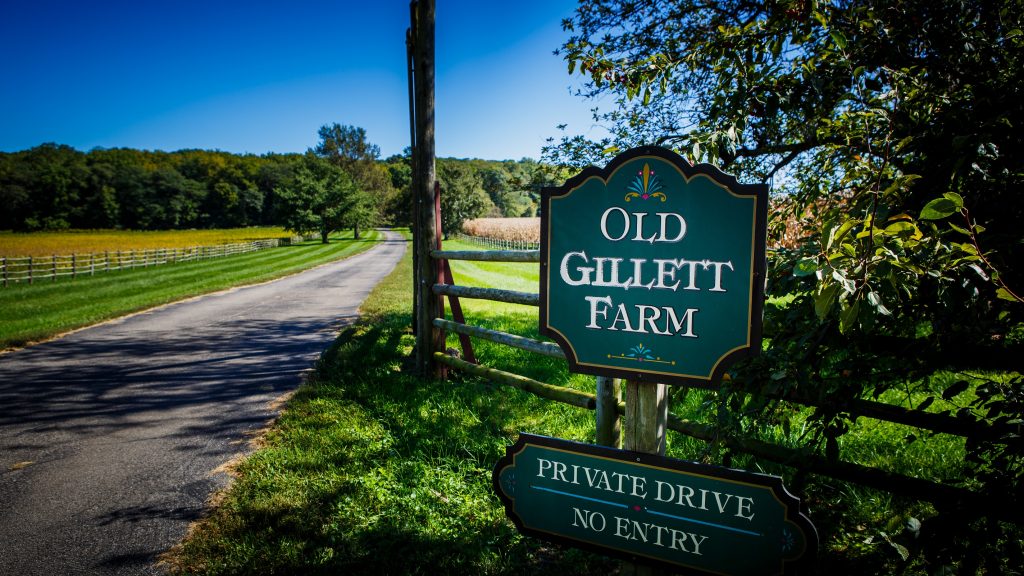 A long driveway at the base of Elkhart Hill leads to the mansion. Photo courtesy of Fine and Company.

Richard J. Oglesby, who served three nonconsecutive terms as Illinois governor between 1865 and 1889, married Gillett’s eldest daughter. They built a 46-room mansion, known as Oglehurst, across the hill from the Gillett house. The Oglesbys are buried in the local cemetery on the hill.

A Gillett descendant later married into the Drake family, which owned the Drake Hotel in Chicago. During the Great Depression, the Drake family lost the hotel, and Elizabeth and William Drake moved to the Old Gillett farm to raise their children. Their granddaughters, Lisa Pasquesi and Cathie Carolin, now own the farm.

According to Michael Fine, head of Fine & Company, LLC, which is conducting the farm auction, the granddaughters decided to sell the farm because it became too expensive to maintain, and it was time for them to move on to other endeavors. In addition to selling both the Gillett House and the Drake House, all of the farmland surrounding the hill will be auctioned off.

Standing on the wrap-around screen porch while providing tours of the estate to reporters, Fine pointed out the vast view of the distant horizon.
“There’s nothing like this in the Midwest,” he said.