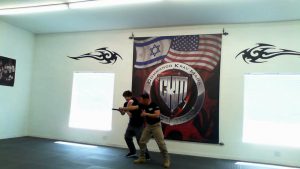 Instructor Thomas Altevogt (R) demonstrates how to deal with a knife attack with student Jessie Withers. | Photo by Debby Hernandez

After retiring from the U.S. Marine Corps in 2010, Thomas Altevogt decided to instruct Commando Krav Maga, an Israeli combat system. Now, he teaches the martial art in Springfield.

Altevogt said he learned about CKM in the Marines, where he did combined training with the Israeli military. In combined training, each military group learns new methods of combat from the other.

He later found himself in Springfield, where he took private lessons in CKM. Altevogt decided to become an instructor in 2014, and opened a facility on Robbins Road in May of this year.

“I knew that Israel’s fighting system is one of the best,” he said.  “I wanted to teach other people how to survive.”

Altevogt is also the Toys for Tots coordinator in Sangamon County and works as a financial adviser with Prudential Financial.

Altevogt said the main focus of the CKM course is not an intense workout, but rather learning self-defense techniques.

“You have to learn those techniques because once you’re out in the streets, there are no second chances,” he said.

Alvegogt said both the attacker and the victim tend to run into trouble because of “ego.”

“If somebody pulls a gun on you or a knife, and they want your phone or money, give it to them,” he said. “Sometimes you have to swallow that ego so you can live.”

A typical day of CKM training begins with a warm-up. Next comes learning techniques such as disarming someone armed with a gun or a knife, and getting out of choke holds. Students train through repetition before moving on to a new method.

“Every day we are always going to do the same things that we learned previously because you have to build that muscle memory,” Altevogt said. “I want my students to be able to perform the techniques blindfolded or in the dark.”

At the end of a training day, surprise attacks are performed with other classmates.

“Surprise attacks is a simulation of not only dealing with a single attacker, but multiple attackers, because out there, they have buddies,” he said. “Defense techniques you have learned are the only (methods of attack) that could be utilized on you. The (fake) ‘attackers’ would know that.”

Altevogt added he decided to include a play area in the facility for the benefit of parents who wish to start the training but do not have a babysitter or daycare.

While the class currently consists of about eight members, it is expected to expand as its social media presence grows.

Jessie Withers said he first learned about CKM from the Springfield Shooting Center, which specializes in teaching people how to use firearms.

“I was talking about meeting a practical form of self-defense; I really wanted something that works in the streets,” Withers said. “The world is not getting much safer.”

Withers sad while he was initially hesitant to join the course because he did not have prior experience in self defense, he found it easier than expected to get accustomed to the group.

He added that since he joined the course, he feels a bit safer walking the streets.

“It’s a lot of fun and good learning,” he said. “Plus, you don’t want to always rely on concealed carry with just blind luck when you go out, and live your life hoping to never get into a confrontation.”

Christopher Pepper said he and his girlfriend joined the course after they discovered it via the CKM Springfield Facebook page.

Pepper said the course has helped him build confidence through the repetition of CKM techniques.

“You learn things you wouldn’t even think about,” he said. “Some of it seems kind of simple, but I think you have to train your mind first. Something happens to you, you get scared … so you have to practice what you learned and just build from there.”