Home/Uncategorized/Electric Ave. opens shop with only American-made clothes
Previous Next 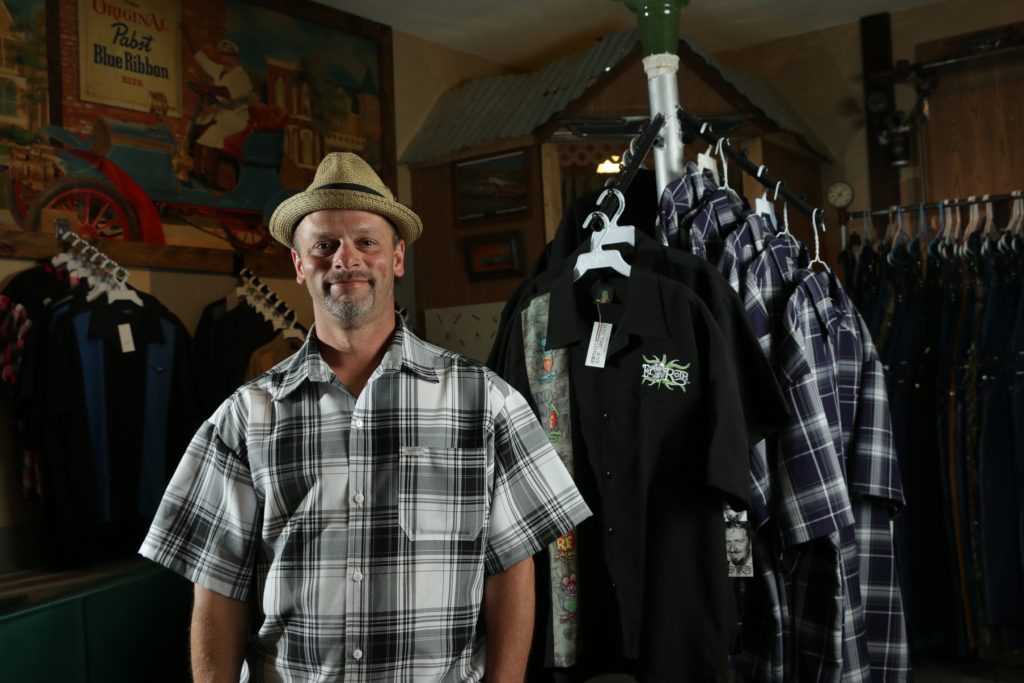 Chris Rowden likes to point out that the American Revolution started with a boycott on imported goods.

“They were taking our raw textiles to Europe, making goods and then selling them back to us,”  he said.

Rowden’s new shop, Electric Ave. Clothier, is in a similar vein as the Great Experiment: selling only clothing and accessories made in the U.S.

Originally selling T-shirts out of a truck for about two years, Rowden opened a brick-and-mortar location of Electric Ave. Clothier in May at 3351 S. Sixth St. Frontage Road E. The store carries casual clothing, hats, belts and other accessories.

At first, it was difficult for Rowden to even find clothing brands made in the U.S. Some items he carries were stitched in the U.S. from fabric produced elsewhere, but Rowden strives to find brands wholly produced here. Many are regional brands with limited distribution; one manufacturer of blue jeans from Tennessee told Rowden they had never sold north of the Mason-Dixon line.

“Nobody sells clothing made in America,” Rowden said. “I’ve looked for years, and on the Internet is about the only place you can find it.”

Rowden was spurred to action by the documentary film “Death by China,” which explores the decline of manufacturing in the U.S. as those jobs were sent to countries with lax labor and environmental regulations.

However, Rowden doesn’t condemn people purchasing imported products, instead blaming the domestic political decisions which have lead to outsourcing of manufacturing and the societal expectation of cheap goods. He sees buying American-made products as an investment in jobs and a robust tax base in the U.S., as well as a moral choice to protect the environment and to prevent child labor and forced labor.

“It’s a matter of the erosion of our own way of life, here in America,” he said.

Robin Fuchs, a customer of Electric Ave. Clothier, says buying American-made goods is important to him because of the implications for jobs and taxes. Fuchs’ own businesses, Beer Tours USA and Craft Brew Directory, are also focused on promoting American goods.

“If I spend my money, I want to know that it’s staying in the United States, and it’s supporting American families,” he said.

Although the “buy American” mantra is traditionally associated with unions and more recently with President Donald Trump, Rowden says he’s not making a political statement one way or the other.

“I used to do gun shows, but I’ve also done PrideFest,” he said with a laugh. “I’m very open-minded.”