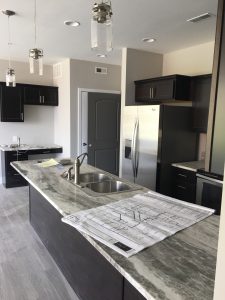 The kitchen of a recently completed unit at St. George Apartments. Photo courtesy of Josh Wagoner.

A historic downtown building will soon be home to nine new luxury apartments.

St. George Apartments, located in the St. George Building at 300 E. Monroe St., is slated to open on July 1, the first phase of a project which will eventually see additional apartments and retail space downtown.

Josh Wagoner, who owns the building, says five of the nine apartments – ranging in price from $975 to $1,800 – are already spoken for. Once the remaining apartments on the second and third floors are occupied, Wagoner plans to begin buildout on the first floor, constructing additional apartments and shops.

According to Wagoner, the building was originally constructed by Thomas Dresser, son of Rev. Charles Dresser, who performed the wedding of Abraham and Mary Todd Lincoln. The reverend also sold the Lincolns their home in Springfield. The St. George Building once held a farmhouse which was torn down around 1899 to make room for the current building, Wagoner says, and it’s actually four structures refaced into one some time around 1950. The current mid-century modern appearance with a decorative glass facade facing Monroe St is the product of a remodel in 1962, which also added the third floor. Wagoner says the building’s basement once held the Fireside Tavern, where he says local judges used to go to gamble. The basement still boasts gambling chip floor tiles. 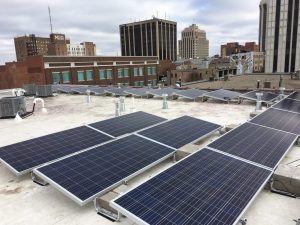 Wagoner says he was first drawn to the building because of its parking lot, which was created when another building was demolished.

“I didn’t see a lot downtown that was nice and had good parking,” he said.

An array of solar panels on the roof of the building provides power to each apartment, Wagoner says, adding that the tenants will receive the resulting solar power credits.

The architect for the project is Scott Cowdrey of Cowdrey & German Designed. Joyner Construction is the contractor.