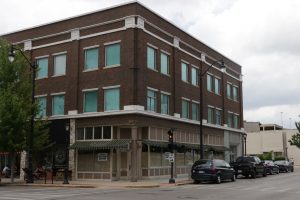 Hair of the Dog Bar/Bershop is set to open later this month.

A combination barbershop and tavern is slated to open downtown later this month.

Hair of the Dog Bar/Bershop will be located at 323 E. Monroe St. and will be operated by Declan Binninger and Jeremy Bredemeyer.

“It’s like what you might have imagined your grandfather’s barbershop looked like, attached to the place your grandfather may have stopped off for a drink on the way home,” Binninger said.

He says the shop will initially have two barbers, with another barber starting later. Bredemeyer, who previously helped found Precision Barbers in Springfield, will be one of the barbers at the new location.

Bredemeyer says the idea for the shop came from his bar-tending and barbership experience.

“What do guys like to do when they get a haircut,” he said. “I cut hair for six years, and they always talk about drinking, so the idea of meshing the two together makes sense.”

The space which Hair of the Dog will occupy most recently held Springfield Right to Life, which moved last year. Bredemeyer said he has like the building for a long time, so it was a natural choice for a new business. The interior is currently being remodeled with wood accents in an old-fashioned style.

Binninger says the City of Springfield was helpful in trying to bring the concept to life within the existing building code.

“It was very collaborative,” he said. “We walked in and said, ‘This is what we’d like to do and what the law says. We think we can do it within these limits.’ ”

The barber shop portion of the business will be separated from the tavern area by a partition wall, but each sides will be visible and easily accessible from the other. The tavern will sell package liquor but will allow consumption on-premises for small amounts of alcohol. Binninger hopes to offer beers which aren’t readily available elsewhere and attract professionals working downtown at places like the Illinois State Capitol Complex. He adds that the business probably won’t compete with other establishments selling alcohol because he anticipates closing around 7 p.m.

Hair of the Dog Bar/Bership is slated to open by the end of June.